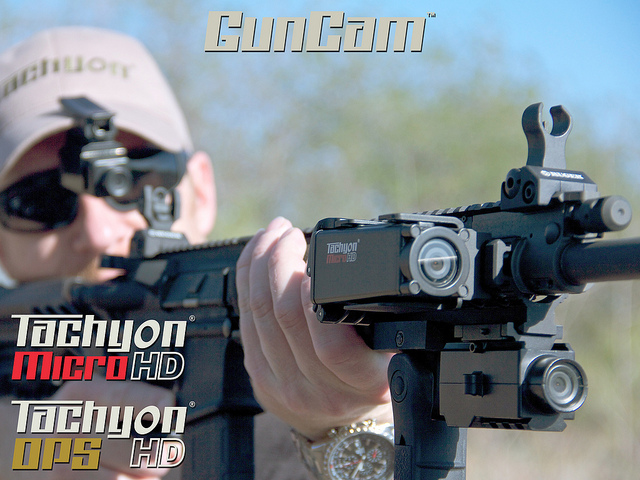 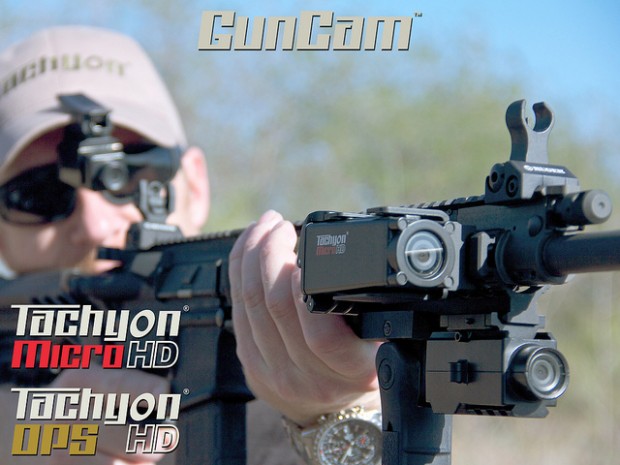 One of the coolest videos I saw when first researching the sport of Airsoft was taken from an M4 Carbine AEG’s front rail system. Looking into this further, the company behind the gun camera was Tachyon Inc. Tachyon makes durable cameras for not only action sports but, also, real-world military and law enforcement applications. The Tachyon Ops HD shoots 1280×720 video @ 30fps, using a 125 degree field of view. This makes it a more natural image without creating a fisheye effect. Additionally, the camera is capable of timelapse photography. In this mode, the camera will take one photo every 2 seconds.

Unlike many other action sports cameras, the battery life on the Tachyon Ops HD is rated at up to four and half hours of use! In terms of mounts, Tachyon has a huge assortment of them – both for civilian and tactical uses. In our review, we got the “GunCam” package, which includes not only a metal housing to keep your Tachyon Ops HD safe but, also, a number of picatinny rail adapters for scopes, shotgun barrels, etc. This is in addition to the standard mounts found in the basic Tachyon Ops HD package like the helmet mount, tripod mount, and ball cap “clip” mount.

Using the Tachyon Ops HD camera is very simple – it is as easy as holding down the power button until the status light turns on. From then until you hold down the power button again, you are recording video. Changing video modes on the camera is also rather simple and is accomplished using a short sequence of button presses and holds. To know which video/photo mode you are currently using, the status light will either be blue, red, or both. It is all fairly straightforward. While the photography angle is interesting, I think most users will be equipping this camera to shoot video. 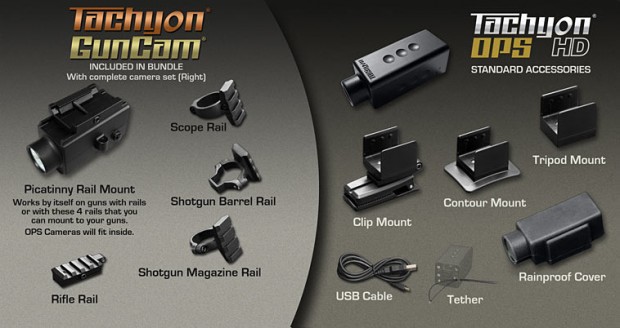 The contents of the GunCam bundle include the standard mounts.

Tachyon’s camera is also very light at 1.7 ounces with a small physical profile. Unlike larger action cameras, it will not become a distraction when mounted on your Airsoft weapon or helmet. In fact, the camera is about as wide as a semi-automatic pistol, making it feel almost like a part of your handgun. There are various types of firmware/programming available for the Tachyon Ops HD, but you must specify which version you want when you order. The basic version features beeps and standard, on-off functionality. However, there is a really cool “Police” firmware version which loops recording video. This means an officer can engage the camera and not have to worry about starting or stopping it. It will just keep recording – eventually looping and recording over the oldest video first.

The two biggest issues with the camera are its lack of 1080p resolution and low light performance – unfortunately, the Tachyon OPS HD is not the best at recording dark locations. Additionally, 1280x720p resolution can make the video from the device difficult to cut together with other action cameras that shoot at 1080p. The resolution becomes less of an issue for officers looking to record on-duty encounters. 720p is more than adequate for such uses. In fact, given the devices tough construction and spartan feature-set, I have a pretty solid notion that Tachyon sells to Airsoft players as a secondary market after on-duty personnel. Here is an Airsoft match recorded from the Tachyon GunCam:

Overall, the Tachyon OPS HD action camera is an excellent choice for anyone looking for a durable and low-profile video recording solution. Whether you are someone who slaps on a Sam Browne belt before briefing and is looking to record your shift or tactical engagement; Or, if you are an Airsofter looking to record his or her team’s games, you can’t go wrong with this camera. Additionally, the basic Tachyon OPS HD/mount package is available for $149.95 at their official website. This is about $50 dollars less expensive than most decent action sports cameras (and those are usually a lot bigger, physically, by comparison).