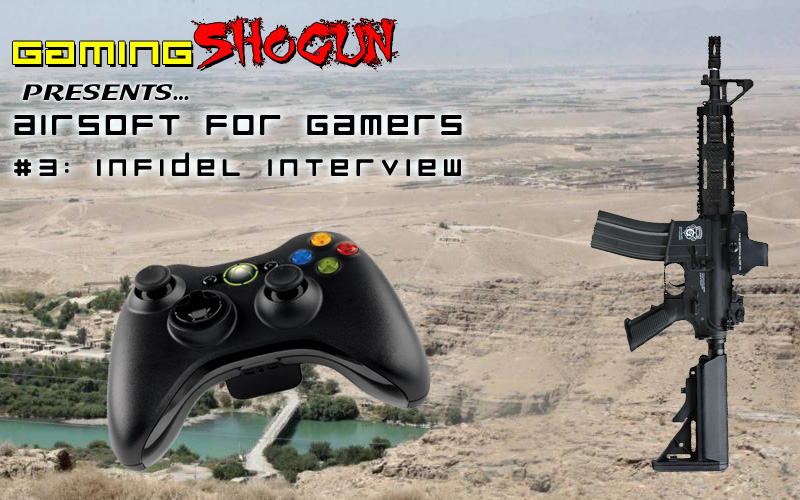 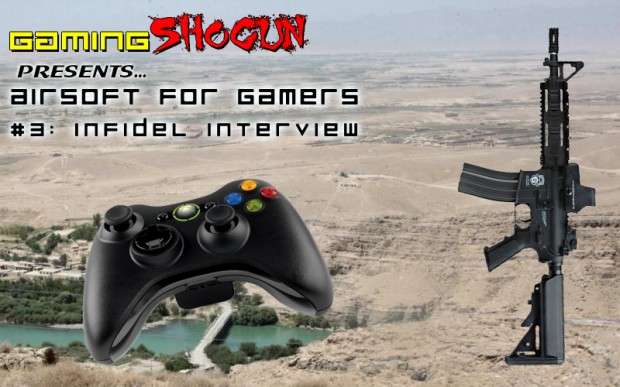 This week, we were initially going to do a rundown of various AEGs by type and give a primer on their usage. However, we ended up getting the opportunity to ask “WarJunkie” of the Infidel Airsoft team some questions about the game of Airsoft, how their team functions, and more!

Q) When and how did the Infidel Airsoft team get its start?

We started out playing out in the desert down where I live in Blythe, California. After playing a few times, we all decided to get serious and made the team. We started out as “SoCal Desert Spec Ops” and then later changed our team name to “Infidel”. We have been a team for about 2 years now and we plan on being one for many, many more.

Q) What have been some of Infidel’s challenges in becoming such a well-known Airsoft team?

Putting up content that the Airsoft community would like to see would be one thing. Getting our name out there was the biggest challenge, really. It took a lot of money marketing ourselves with advertising and doing lots of big giveaways on our Facebook page. All the money used in the self-promotion came out of our own pockets with no sponsors involved.

Q) In preparing for a big Airsoft game or tournament, what is the team’s process?

HA! Actually, I will play Call of Duty the day before! 😉 But we usually have very late nights at “Chubbs” place, talking about strategy, how fun it is going to be, and working on our guns.

Q) How long have you been playing Airsoft?

Q) When maneuvering on the field or in CQB scenarios, do you guys use any specific real-world military tactics like bounding overwatch, stacking, etc?

For CQB games, we run for it usually – its the most fun that way and we like the fast-paced game type. Tactics-wise, we do use covering fire when playing to help us move into positions.

Q) What is your advice for a person interested in getting into Airsoft?

Get a good AEG that wont poop out on you after 3 times taking it to a field. G&G Armaments are good for starting out if you have a low budget – great guns that will last you until you want to get that good, upgraded gun like a G&P or a KWA, for instance. Make sure you remember its an honor sport. Call your hits and don’t get sidetracked with all the hoopla that goes on in the airsoft community. Also, always remember to have fun!

Q) Do you have any particular AEG brands or models that you are particularly a fan of?

I like the M4 carbine platform. Brand-wise, I like G&P, KWA, and G&G Armaments. As far as the rest of the team goes, most of them have King Arms, Tokyo Mauri, We Tech, KWA, JG and other good brands. Most of us run custom guns that we all built though.

Q) In a game of Airsoft, can you give us a rundown of your basic load-out? What do you take into the field?

For a normal day of Airsofting, we usually wear our ACU pants and our team shirt. We all have different tactical vests (but all in ACU camo) and our Save Phace masks. As far as weapons, we bring ALL our guns. I can’t tell you how many times we have had our guns go down on the field and then we were happy to have brought two to four back-ups each. 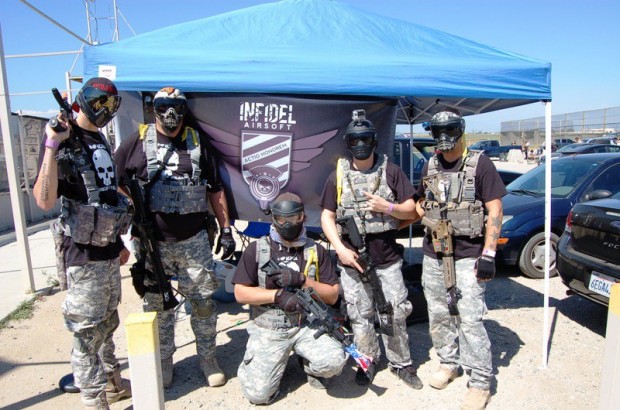 Infidel at SC Village last month (from their Facebook page)

No, we don’t really have a class system on the field. We have something similar, but its more towards keeping the Infidel internal-engine running smooth. I run the Facebook team page, marketing, sponsors, edit videos, etc. I have the biggest load as the leader of the team. “Wreckless” is our sexy design maker – he makes our logos, does some photoshop work for us, and also helps with video editing. “Chubbs” and “SAC” are our team techs – between the two fof them, they have over 12 yrs experience and are both great techs and know what they are doing. “Jester” is our go-to guy for when we can’t find that one Airsoft part on the internet – we simply go to him to find it. Or, if there is that part we’re wondering about he will find it haha! As for “Vorhees” and “Killzone”, our two newest additions to the team, they have no current role on the team – just expect to come out and have fun playing. Killzone is wanting to start to help with the video editing too, but we will need to work with him on that.

Q) Where do you guys like to play Airsoft at? Do you have a favorite field?

We have a lot of fields we like to play at. We play at Hollywood Sports Park, SC Village, Insight Interactive, Tac City South, Code Red Airsoft… Our favorite field would have to be SC Village though.

Q) What do you see needing to happen for Airsoft to become more mainstream like paintball?

Actually, there is a competitive Airsoft league out there called the “Association of Competitive Airsoft”, known as the ACA here in Southern California. They host a huge number of 5 day tournaments that span over a season of 5 months if I’m correct. In 2012, it went to a national level, with fields and teams from all over the USA being able to host an ACA event in their state and, in return, play on a national level. When the ACA started in 2011, it was only available to handful of teams and fields in Southern California.

Q) Finally, is there anything you guys would like to promote or events you will be at in the near future?

We want to promote our team motto that all Airsofter’s should remember when playing – especially with teams that want to become well known: “Actio Honorem” which, in Latin, means “Action with Honor”. We will be attending a lot of Airsplat’s events this year, so watch out for all those (if you’re in California, at least) as we will most likely be there. Might also be doing some Lion Claws Milsim Event this year as well.

We would like to thank WarJunkie, leader of the Infidel Airsoft team for taking the time to answer our questions. You can keep up with Infidel’s events and social media at their official Facebook page and Youtube channel.