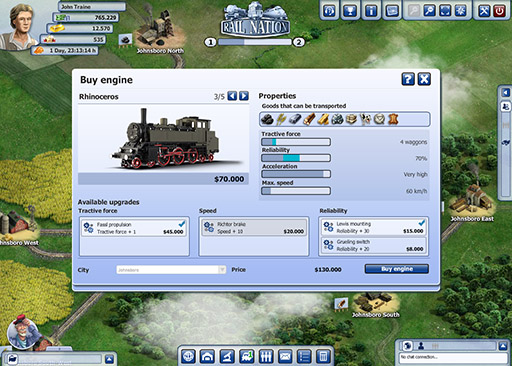 Munich, 20 March 2013 – Trains have always fascinated people – millions of enthusiasts worldwide dedicate their free time to the pursui t of this fascination for everything to do with railroads, locomotives and the routes they follow. Successful board games, computer games  and entire TV shows are dedicated to the theme – but until now, no conte mporary online game covering this area has held the public’s attention. Travian Games and its subsidiary Bright Future (Miramagia, FIFA Manager 13) have more than met this challenge. Now all the tracks are in place and the free-of-charge Rail Nation is powering out of the station on its first open beta journey!

The strategy game is divided into six consecutive railroad eras and has undergone a period of comprehensive fine-tuning during an intensive closed-beta phase with thousands of  layers. Now all interested strategy gamers and railroad enthusiasts have the opportunity to found their own railroad company, use their strategic know-how to create economically  viable transport s and create alliances in the form of corporations: The fun begins at play.rail-nation.com.

Because movement is everything in the railroad business, Rail Nation has a dynamic landscape map with 3D train models. Every new digital railroad tycoon develops their personal wealth and their company&rs quo;s prestige in direct competition with other companies. With strategic cunning, efficient routes must be planned along with comprehensive timetables for transporting over 40 different goods. Growing profits can be used  o build a growing fleet of steam, diesel or electric locomotives and different types of railcar. During the game, the company can service more and more cities and meet the challenges of largescale transportation competitions against o ther players. Targeted goods deliveries to the cities also influence their development.

Players cannot afford to neglect their station infrastructure, and they also have the option to win lucrative bonuses if they mak  the right improvements to their locomotive she ds, control centers or train stations, for example. With the option of founding a multiplayer company and uniting friends, competitors or even bitter rivals into a single corporation, Rail Nation places a great deal of value in a joint gaming experience.

Rail Nation is user friendly and appeals both to expert browser gamers and also novices without dispensing with more advanced strategic options. The first real railroad browser game is played in rounds of 3 – 4 months and provides many exciting features for railroad enthusiasts. It is currently available in English and German – more language will follow in the near future.

Interested players can register for the open beta at play.rail-nation.com to take charge of their mighty steam or electric locomotives. There is also a facebook pagewww.facebook.com/RailNation  with regular information and updates. The official forum for the game is located at http://forum.rail-nation.com/.