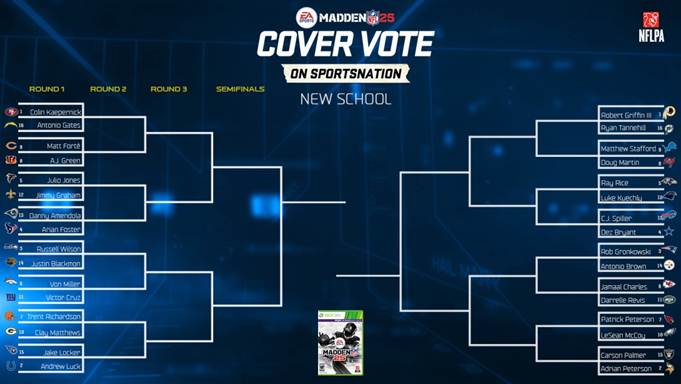 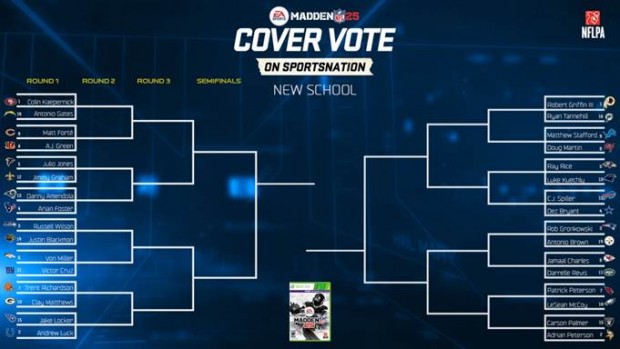 REDWOOD CITY, Calif. – March 11, 2013 – Electronic Arts Inc. (NASDAQ: EA) and ESPN today announced the official players and brackets for the Madden NFL 25 Cover Vote. The vote will include two brackets, one composed of 32 new-school NFL stars and one of 32 old-school NFL legends, with the winner of each bracket facing off in the finals for the right to appear on the cover. The Madden NFL Cover Vote has proven to be extremely popular with the fans, garnering over 33 million votes since its introduction in 2011.

The new school vs. old school format is especially fitting for the 25th anniversary of the Madden NFL franchise, as this edition of the game both celebrates the past while laying a strong foundation for the future. The name Madden NFL 25was chosen in celebration of the franchise’s silver anniversary, and the game will launch on August 27.

Throughout the competition, fans can vote for all their favorites by visiting ESPN.com/MaddenVote starting today with all 32 old-school and new-school matchups. And, for the first time ever, SportsNation will debut a limited window of live Twitter voting during their show every Tuesday from 4-5 p.m. ET on ESPN2.  Voting starts now and will continue up until the reveal of the winner on Wednesday, April 24.

The first round of the competition promises to offer plenty of excitement, with several high-profile matchups. In the old-school bracket Hall-of-Famer Curtis Martin takes on former Pittsburgh Steeler Jerome Bettis in a battle between two of the top running backs of the previous decade; while in the new-school bracket feared Broncos linebacker Von Miller will do his best to prevent New York Giants wide receiver Victor Cruz from salsa dancing into the next round.

Over the past week ESPN has hosted a special Wild Card Round via Twitter with Hall of Fame wide receivers Cris Carter and Jerry Rice going toe-to-toe to decide who would earn the last slot in the old-school bracket. Today Jerry Rice took the honors, and will test himself against former Jacksonville Jaguars running back Fred Taylor in the opening round.

Fans can tune into SportsNation every Wednesday at 4pm ET on ESPN 2 to get the weekly results of the Madden NFL 25 Cover Vote, and watch hosts Marcellus Wiley and Charissa Thompson as they provide in-depth analysis and debate the results. Cover Vote participants and other special guests will also be appearing on SportsNation and other ESPN programming for the duration of the campaign to make their case and attempt to earn fan votes.

“Madden NFL 25 will be a culmination of 25 years of innovation when it launches in August and there is no better way to honor our incredible history than by engaging our fans in the ultimate debate of old school vs. new school,” said Anthony Stevenson, Senior Director of Marketing at EA SPORTS. “Our fans’ passion has built the Madden NFLfranchise into what it has become, so it’s only fitting that they decide who should be the face of this special year ofMadden NFL; whether it be one of the NFL’s brightest young stars or an all-time legend of the game.”

“The Madden NFL 25 cover vote is the perfect marriage between two strong brands coming together to put fans in control of what they’re most passionate about and giving them a platform for their voices to be heard,” said Brian Dailey, Director of Games and Partnerships for ESPN.  “Engagement has been strong in our last two Madden cover votes, accounting for some of ESPN’s most successful social activations to date, and we anticipate that to continue with the 25th anniversary.”

“The Madden NFL 25 cover vote includes an incredible collection of young NFL stars and some of the best legends to ever play the game, so it is sure to spark great debate over the next month on SportsNation,” noted Jamie Horowitz, Vice President of Original Programming and Production for ESPN. “Our viewers are extremely passionate about their favorite players and teams so we’re looking forward to seeing how the vote turns out on ESPN.com and Twitter.”

To celebrate the start of Madden NFL 25 Cover Vote, EA SPORTS and ESPN hosted a live bracket reveal onSportsNation at LA Live. The star-studded event featured visits from San Francisco 49ers quarterback Colin Kaepernick and former San Francisco wide receiver Jerry Rice making their cases for the new school and the old school, alongside a musical performance by Kendrick Lamar. The event provided a high-energy start for the Cover Vote and set the tone for an exciting competition.

Fans will also have the opportunity to win a trip for two to the Madden NFL 25 Cover Shoot on Wednesday, April 24 and tickets to the first round of the 2013 NFL Draft on Thursday, April 25 in New York City. Starting today and through March 18 users will be able to click on the Xbox 360 Madden NFL 25 Play and Win banner on the Xbox Live dashboard to gain access to the various ways to enter to win. Full rules and details can be found here.

Madden NFL 25 is developed in Orlando, Florida by EA Tiburon and will be available for the Xbox 360® video game and entertainment system and PlayStation®3 computer entertainment system for $59.99 and can be preordered atGameStop. To learn more about Madden NFL 25, visit http://www.easports.com/madden-nfl. Fans are also invited tobecome a Madden Insider for exclusive information on Facebook including the latest news, original content and more for Madden NFL 25.

All player participation has been facilitated by National Football League Players Incorporated, the licensing and marketing subsidiary of the NFL Players Association (NFLPA).