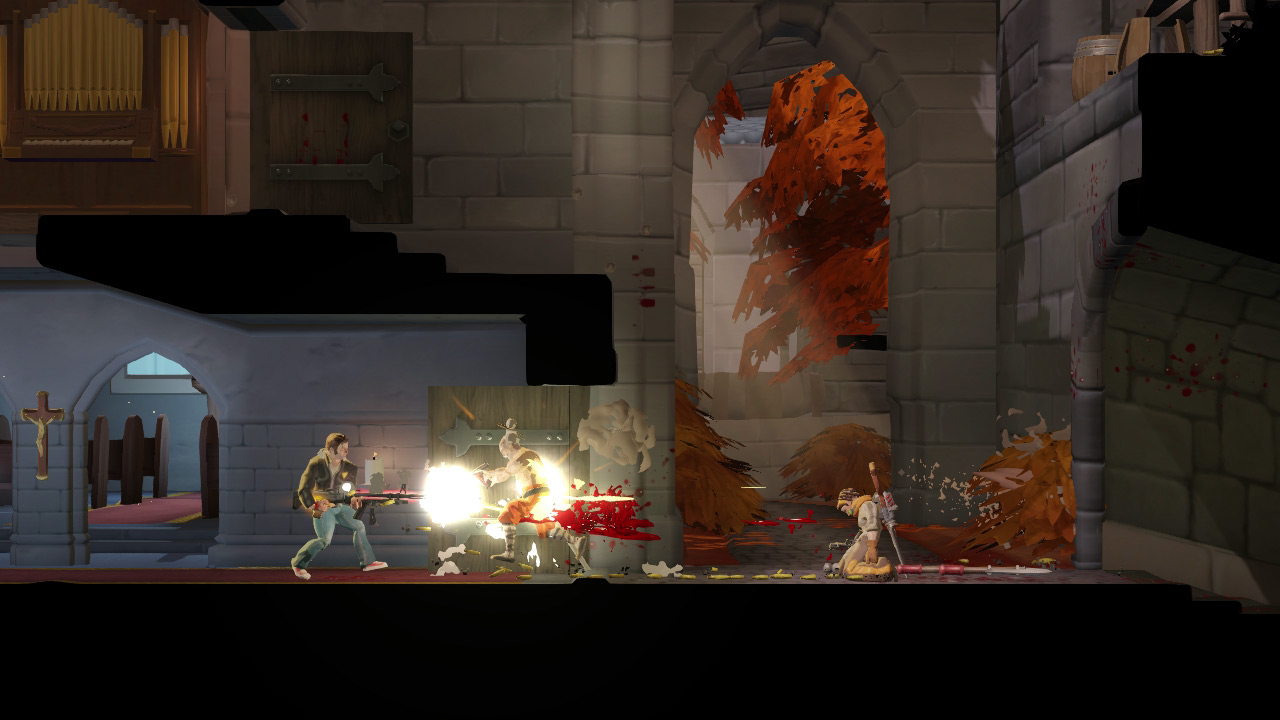 The Showdown Effect is a 2.5D multiplayer action game inspired by 80’s and 90’s action movies.  Champions from throughout time fight to death for fun, for glory and for awesome.  The Showdown Effect recreates the outrageous combat found in classic action movies and then takes it one step further.  Use weaponry pulled straight from the silver screen’s unparalleled arsenal : shotguns, baseball bats, assault rifles, umbrellas, grenades, katanas, rocket launchers and more.  No explosion is too loud and no bullet dodge is impossible. Impale your friend with a broomstick and tell them to “Stick around” as you jetpack off to the next enemy.  The Showdown Effect also uses integrated streaming technology to live stream directly to Twitch.tv, without the need for third party software. 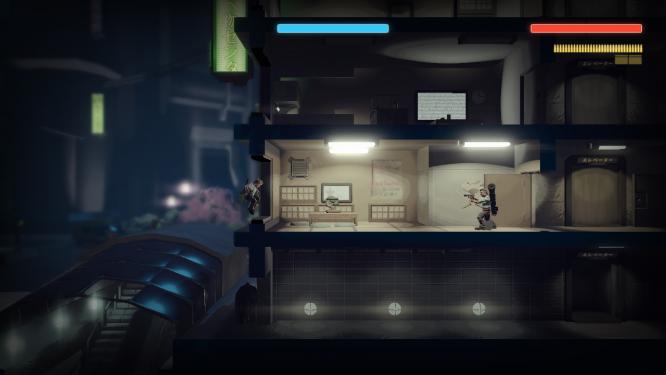 As previously addressed, this is a game where the action shouldn’t be taken serious.  You play one of a several different characters made up of 80s and 90s icons and you bash, slash, shoot and blow the holy bejeebus out of each other.  I found myself uncontrollably-laughing as I got caught in a rocket launcher crossfire.  One time, I hosed down an enemy with automatic weapons fire only to have someone with a katana slice me right in half.  As the bodies and giblets start to litter the level you hear catch phrases uttered all over the place as more carnage ensues.  It is over-the-top cartoon violence with cartoon characters based off a era of cartoony action heroes.  It looked like fun in the trailer I saw for it so I asked our EIC for a code to get in the fun now. This wasn’t assigned, this was requested, and it was no mistake.

I saw people trying to take the games seriously, getting all indignant when they got killed or weren’t the top score or didn’t understand how a sword wielding enemy managed to Matrix back bend and slide under their machine gun fire and when they quit ,cursing the whole way out. I was glad.  I would rather have one less person to play with than to have that person not get what they were playing, not understanding that absurdity is one of the most important and enjoyable elements of the game.

This was area is what I deem the “First Round” because this was our first look at the game in a closed beta build.  A lot could change between now and the time of release but, with the direction they are going in, it can only get better.  I can’t wait until open beta when we get more players to be pitted against. Right now, it is mostly ringers who have been around a while and noobs, though that doesn’t stop it from being fun.  Open beta will bring out the folks who just want to dominate and don’t really get the game but I can see them falling to the wayside.  In the end, I expect The Showdown Effect to have a loyal following of players laughing just as hard when they are getting blown to pieces as when they are slicing someone down.