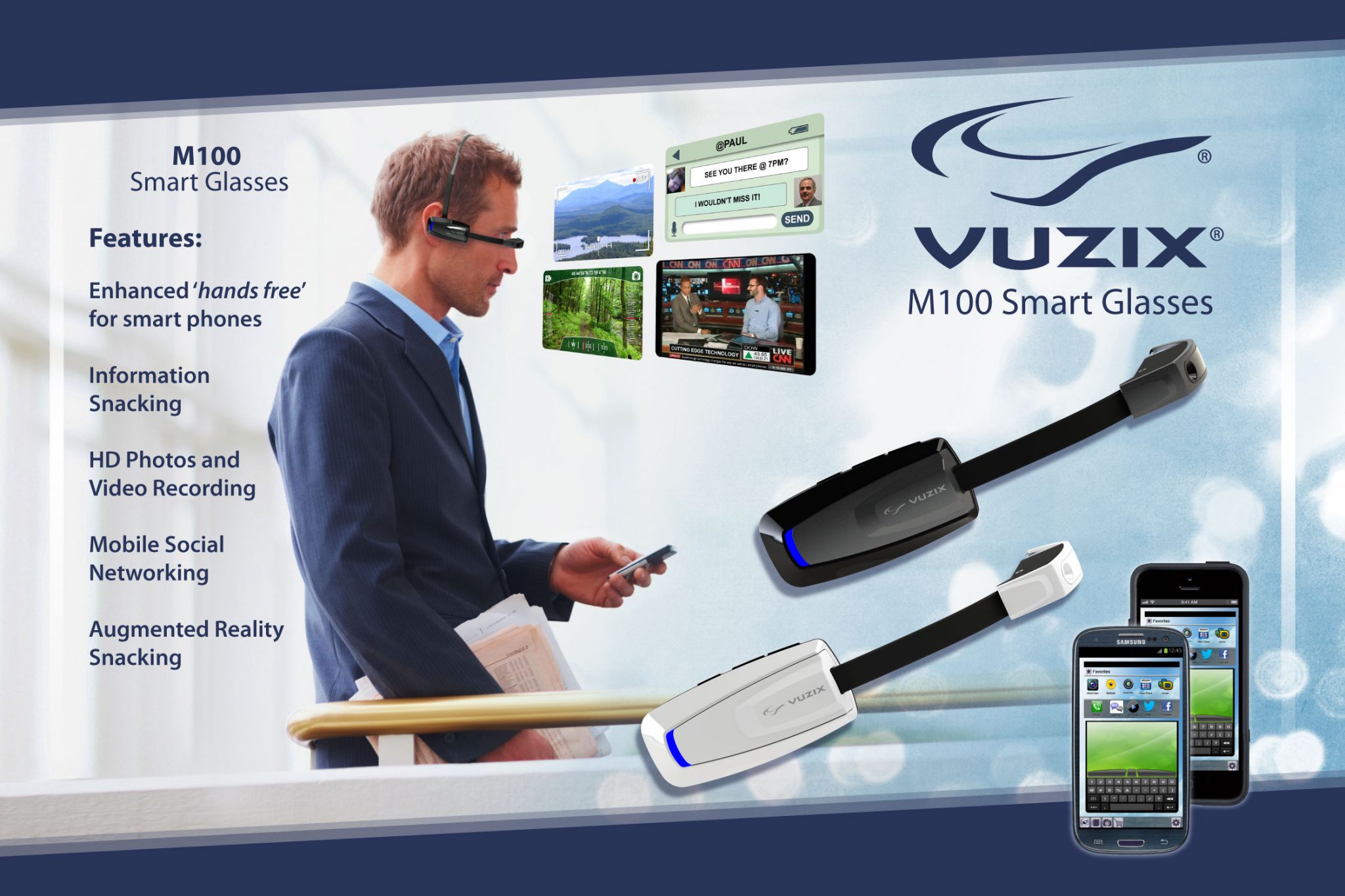 ROCHESTER, N.Y. and LAS VEGAS, Jan. 9, 2013 — Vuzix Corporation (TSX-V: VZX, OTC:BB: VUZI, FMB: V7X) Sunday night for the first time demonstrated working models of its new M100 Smart Glasses at CES Unveiled, the official press event of CES where it was enthusiastically received by the press. Rated as one of the five top gadgets expected at CES by CNBC and given the CES Innovations award, the first public models will be showcased at the Vuzix stand (Booth 14046, LVCC Central Hall) during the CES event in Las Vegas this week. The Vuzix Smart Glasses M100, expected to ship in second half of 2013, will enable wearers to access data and content from an iOS or Android smart phone from the cloud and ‘hands free’.  Showcasing alongside will be the new Wrap 1200D (digital) with full HDMI 1.4a 3D support and the new Wrap 1200AR with stereo 3D cameras, that allows computer generated graphics to be overlaid into the wearer’s 3D view of the world.

The Vuzix Smart Glasses M100 will be the world’s first, commercially available, hands free display and cloud connected communications system. The Vuzix M100 contains a virtual display with integrated camera and powerful processing engine, running the Android OS. Users can connect wirelessly to their smartphone (iOS or Android) or other compatible devices. The M100 is also powerful enough to connect directly to the Internet, run applications and games itself. Working in harmony with a smartphone, users can engage with existing and future applications such texts, video, email, mapping, and audio.

As a hands free accessory with integrated camera/display functionality, Vuzix smart glasses not only let you answer the phone with a visual address book, they enable applications from text messaging and email to visual navigation (via an integrated GPS and head tracker) along with more advanced features like video recording. The interactive head tracking and integrated HD camera, combined with applications on the M100 and a smartphone linked to the Cloud, empower smartphone based augmented reality applications.

Paul J. Travers, Chief Executive Officer, said, “The announcement of the Vuzix Smart Glasses and its eminent availability is the culmination of years of work by the Vuzix team.  We were delighted to win the CES Best of Innovation Award and hope that this is simply the beginning of a great line of Vuzix smart glass technology. In 2012, we saw many new augmented reality applications being developed. This year we will see even further applications and ideas coming to market and now with the M100 smart glasses, developers now have a specific device on the Android OS platform to develop for. We’ve just opened the Vuzix developer portal and are already shipping SDK’s, so we’re confident that the M100 smart glasses deliver must have technology and useful applications in a compact, smartphone accessory.”