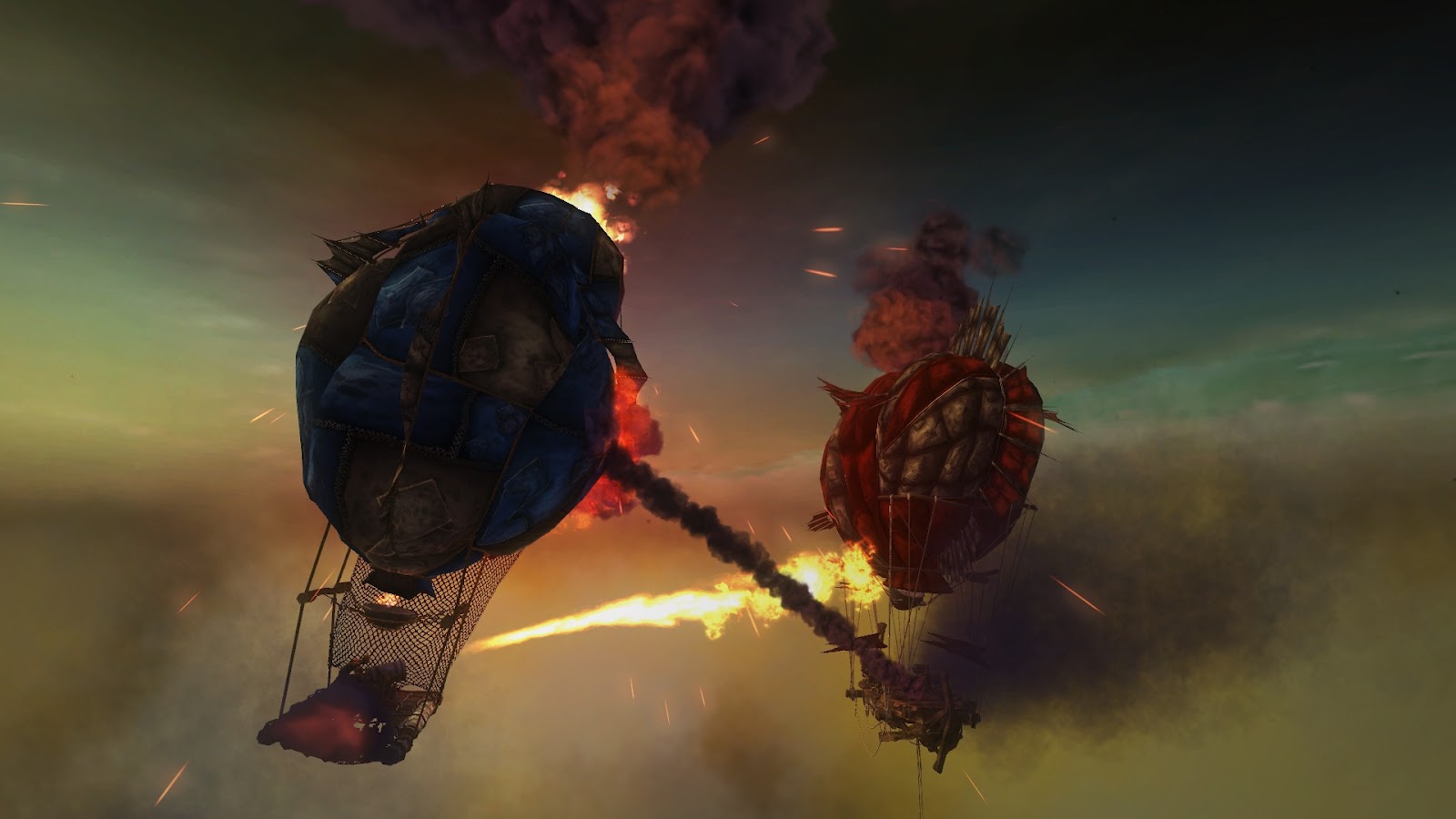 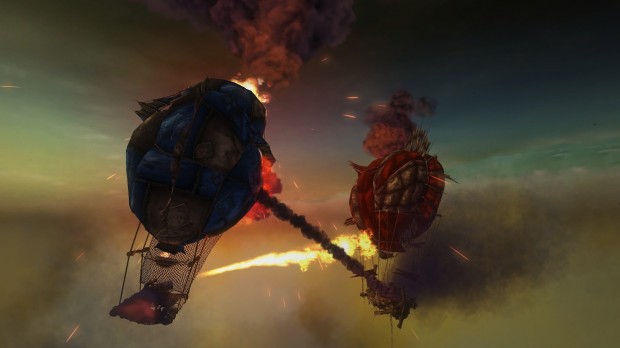 There seems to be a brand new genre brewing in the game community that centers around airship to airship combat.  Ludocraft, a game design team from the University of Oulu in Finland, has brought us our second game of this type in Air Buccaneers.  Similar to Guns of Icarus, Air Buccaneers centers around traditional first person shoot game types, such as team death match or conquest, but involves the use of air ships to wage war.  Air Buccaneers is set in an alternative past, where Vikings and Buccaneers fought over land and resources using these airships that are basically just cannons and a steering wheel on a plank strapped to a hot air balloon.  This game play made for some interesting gaming moments, as well as some very frustrating ones, so let’s see how Air Buccaneers fared with our review.

The basic premise of Air Buccaneers is that a group of Buccaneers are invading Viking lands for resources and material wealth.  The Vikings are rising up to defend their homeland against these invaders, and join battle in the skies amidst floating islands and cannon platforms.  The story is told through short excerpts during loading screens or short little paragraphs in your character modification screen.  Besides these little story morsels, there isn’t really anything else to the story of Air Buccaneers, so if you came here for a good story, you will be vastly disappointed.

Characters in Air Buccaneers are all exactly the same looking guy, with only modifications that you earn during your leveling process.  There is no character personalities that shine through, just the same guy copied over and over again, with different items attached to the model based on what you have unlocked so far.  I understand the reasoning behind this due to the ability to change classes many times during game play, which I will get into more in the next section, but using different models would make the experience that much better.  All I could keep thinking about during game play in regards to the characters, how great it would have been to have character similar to Team Fortress 2 in this game.

With a severe lack of story line or interesting characters to play as, Air Buccaneers has to rely on solid game play that is fun and challenging.  I really like what Ludocraft has going on here with Air Buccaneers, even if it could a little more polish.  You select a side, either Viking or Buccaneer, then set off to defeat the enemy through airship to airship combat.  When the game begins, you jump into a small glider, that will take you to the nearest airship that needs a crew member.  There, you take over one of four jobs, which you can change on the fly.  The four classes are; Captain, Gunner, Defender or Guerrilla.  The Captain essentially steers the airship and gets the crew into position, the Gunner fires one of four cannons on the airship, the Defender helps keep boarders off the airship and fixes the airship when needed, and the Guerrilla boards enemy ships with grenades when the ship is close enough.  Switching between these four classes is as easy as interacting with an item, or just by scrolling through your tools you spawn with.  Similar to Battlefield 1942, this allows you to play multiple roles in one life and never get board with your loadout.

I played my games mostly as a Gunner, and that was a blast, literally.  As a Gunner, you have three different types of loads that you can choose for your cannons; cannonballs, rockets, or flames.  Using these loads will depend on how much damage you are looking to do, and at what range your enemy is at.  When you fire the cannon, you use your movement keys to align your cannon with the enemy, then press fire.  The fuse will be lit, then when the powder is ignited, the cannon fires.  This takes about five seconds to happen, which means you must keep your cannon tracked on the enemy during this time, and that is hard to do!  Determining range is rather difficult too, since there are no crosshairs, either on the user interface or on the cannon to aim.  You just have to use your previous shot as reference, but since both you and your enemy are constantly moving, that is not easy to do. All of this, though, is done well.  The game doesn’t track kills by players, because it is so difficult to aim properly, but you do earn points per hit, per kill, or performing jobs well.

As you play these games, you earn experience points for doing your job well.  These points go into leveling up your character to unlock additional items to customize your character.  You also gain class experience while you do a particular job, and this experience unlocks the class Perk and Flaw trees in the character section of Air Buccaneers. The Perks and Flaws Trees flow in a very similar way to a traditional skill tree, with each branch requiring a set amount of experience to unlock that talent.  However, Air Buccaneers also put in Flaws that you must take if you select a Perk.  Perks can be a shorter fuse time on cannons or extra grenades for a boarder, but come at the cost of a Flaw, like Eye Patch with cuts your screen down by 25%.  Seriously, it will black out a quarter of your screen.  The downside of these Perks and Flaws is that it takes quite a bit of experience in these classes to unlock and enjoy.  If you happen to be running around, doing several jobs during a game, this unlock process will take even longer.

Air Buccaneers is fun to play and the game play is unique enough for me to keep coming back to it.  It will take time to get used to, but if you put that time in, you will see the fun to be had.  The biggest downside is that Air Buccaneers is an online multiplayer game only, that means no offline content nor single player game play.  Even worse, is that  I have only seen, at most, eleven servers to choose from with only two being populated, one in Australia and one in Ireland.  So, actually playing this game depends on if there are games happening, and what your connection speed is, because connecting to Australia can be tough with a weak connection speed.

The aesthetics of Air Buccaneers didn’t strike me like some of the other games out on the market.  The aesthetics just didn’t feel as polished as I would have liked, but are not bad in any sense of the term.  The worlds are vast and well designed, but due to the nature of the game, the only time you ever pay attention to the environment on the ground is as you are plummeting towards it.  I like the way Ludocraft does inject environment into the air battles, with floating islands and flotillas that double as cannon platforms or capture points.  One battleground even had a massive tornado that would cause the air ships to be sucked in and could be used for an extra speed burst.  The models of the characters are all the same, except for customization options which, at later levels, really add more of a contrast to the game.  The actual graphics were a little below par due to various glitches and bugs that I ran across, and, again, suffered from a lower budget compared to other games on the market.

Sound was bare bones, with the same voice actor for every character on a particular side.  You can issue voice commands through the UI to your team mates, which is a nice touch but it is the same voice over an over again.  Customization of your characters voice would have been a very nice touch, but would have required more actors.  Music is just background noise and quickly forgettable, and the sound effects do a great job in making the battles sound like battles.

Air Buccaneers from Ludocraft is one of Steam’s Greenlight games that are available now.  Steam’s Greenlight project lets gamers vote on the games they want to see be made available to them through Steam, and Air Buccaneers is a nice addition.  While lacking a certain amount of polish that is seen in higher budget games, Air Buccaneers does what it does right.  Airship to Airship combat feels right and, though at a slower pace then most gamers are used to, offers up some challenging game play that will keep people trying new things.  I love how the game allows players to swap classes quickly and at a whim, though requiring class experience points to unlock the Perks and Flaws system does have a tendency to prevent players from doing that.  Air Buccaneers is available now through Steam Greenlight and is a very solid entry into the new airship genre that is popping up.