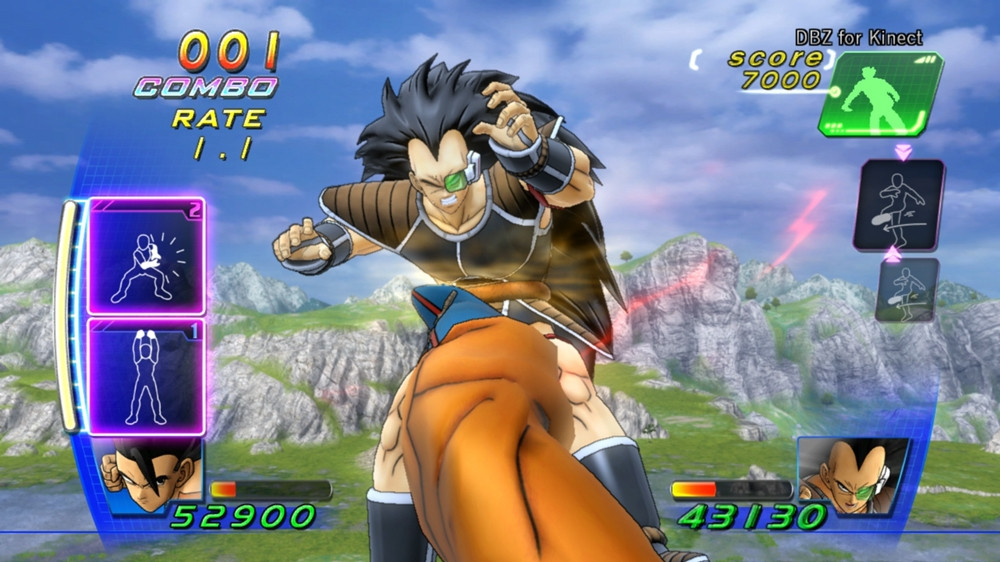 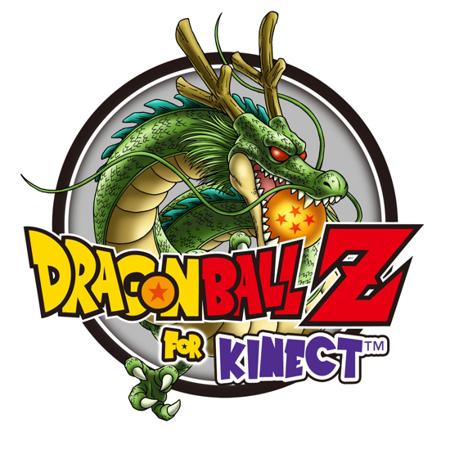 I want to love the Kinect.  I really, really do.  It’s red eye seems to beg for attention every time I fire up one of my XBox 360s, I have an old school one with an upgraded hard drive when Kinect was an addition and I have the beautiful Star Wars one, a white console with a white Kinect daring dust and grubby hands to touch it.  When I get on with my controller and start playing a game Kinect always gives me the opportunity to wave at it if I want and say hi, but most times if I do I find a game that will soon be relegated to a shelf until the day I either discover a place that gives me a good price for a near mint near-miss game or I have a garage sale and pass disappointment on to someone else’s household.  Don’t get me wrong there, have been a couple of decent ones out there, I really recommend the Yoostar series even if they never fixed the clipping issues (if you guys do I will be one happy ham handed pseudo movie star) because being clipped into a movie, tv show or music video badly is still a hell of a lot of fun, especially at a party.  But others leave me frustrated and cursing like old school comic strip characters with #@$% over my head, unable to get the Kinect to read the proper gestures causing me to give it inappropriate gestures (hence why I stopped playing the Kinect games at store displays in front of children).  So when I got a copy of Dragon Ball Z For Kinect I put it aside until I was in the mood to really mess with lighting, distance and probably frustration.  I try to go in objective, I really, really do, but hope has become a limited resource with Kinect for anything but chatting and Netflix.

This isn’t so much a storyline as the chance to fight famous foes complete with cutscenes then unlock them to use in a different mode.  It does tell a loose story and the special feature actually tells some great Dragon Ball Z lore but when it comes down to it it is really about fans of the series getting to fight the characters they love to hate.

This is pretty vital to a game of this type because the goal usually needs to be to make the graphics nothing like the cartoon series it is based after or identical to them, mixed equals muddled.  Luckily this is like playing episodes of the show from a first hand perspective with third person cutscenes with animation identical to the cartoons.  The voices are great (American style, not the original Asian voice style, deeper pitch) and match the sounds and music all fit nicely together to make a great experience for fans of all ages. 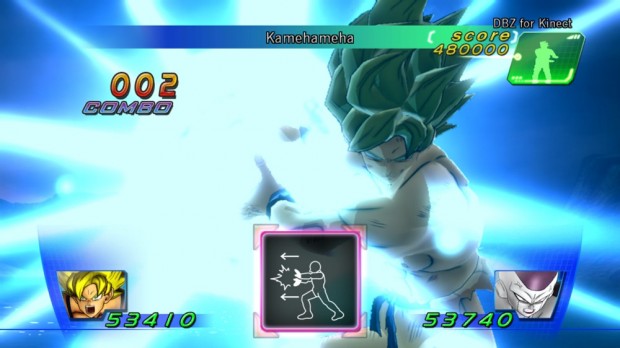 This is where Kinect game reviews usually go awry and so I am happy to say this one is MUCH better than most.  Mapping positions and movements are usually awkward and clunky but it this case it does an excellent job responding and reading movements.  I’m 6’5″ tall with really broad shoulders so reading certain moves are just going to be insanely difficult with a one position view.  When it came to blocking enemy attacks I almost never got it to read, which caused some frustration though it’s completely understandable, with my arm build the meat of my biceps completely block out the location of my hands when I put them up for the blocking gesture.  A person with normal arm proportion would have no problem being read and I think any of the issues I had with the game would be resolved with a normal physique.  Giving this consideration I was extremely pleased with the body mapping and game response.  When I put my hands to one side in a holding-a-ball position I had the pleasure of watching a magic ball build there and when I thrust that movement forward the ball flies at the enemy with a very reasonable response time.

I think a lot of the success for this game lies in the tutorials and the move display options being on the screen.  The tutorials are broken up into each style of fighting, not clearing you and unlocking the next type of fighting until you mastered it.  This makes sure the moves are ingrained but also gives you an idea of what moves will be weaker for you to do.  I knew for the tutorial my blocking ability and ability to break an enemy’s block were going to be my weak points in fights because of my build so I worked around them, I also knew that my jabs and upper cuts responded real nicely and stacked combos fast.  Being so big I had to jump pretty high to get my jumps to register but my dodges registered with ease.  The tutorial decided a lot of my fighting style and skills so that I could use what I knew worked when I got into actual matches instead of flailing and hoping.

The move displays definitely need to get credit too.  Sure in theory they are like a kick boxing version of Dance Central for the most part with special moves and energy building ones displayed on the edges of the screen but it worked and reminded you that if you timed your energy building right you could unleash some seriously righteous fury down upon your enemies as well as jab and kick the snot out of them.  It shows energy building, how long you need to hold a position and how long you have to take the follow up position to complete the combination.  If you pull of some really good moves you are treated to a short cutscene to give you a quick breather and let you reset your position real quick before the next moves.  If the enemy is sending in a wicked attack at you the screen will show on each of it’s four sides different possible things you can do to dodge it such as lean left, right or back or duck.  This was where I had issues because blocking was sometimes the only option but I figured out a way around that I won’t spoil here. 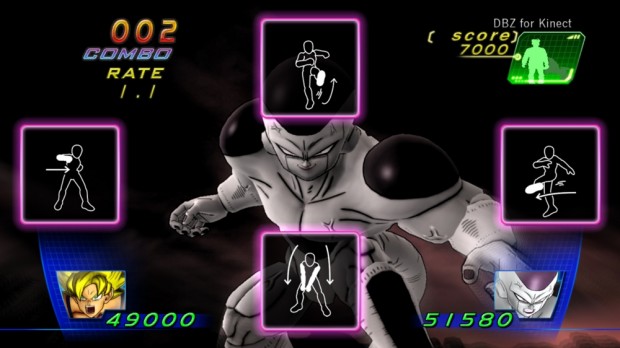 I think something that really needs to be stated is how physical this game is.  You are basically kick boxing in time to a cartoon fight and it wasn’t long before I was sweating profusely and needing to get some fluids in me.  This will have kids of all ages worn out after a few rounds and even the games suggests after some of the longer battles to maybe rest your back a bit and take a break.  The Special Feature is a great way to do this and give you a rest before getting back to the cardio.  This is probably the only time I have every suggested this but I think it is important to supervise younger players of this game because it is possible to push yourself too far and either get dehydrated or physically injured.  As I said before this is basically kicking boxing with some mixed martial arts moves and stances thrown in and that can be extremely strenuous.

After completing a fight it gets unlocked in Score Attack mode which enables you to fight the same fight over again, using unlocked characters, to try to beat your own score as well as a preset one.  These literally can be used as a workout with the game being set on different level of difficulty for how hard you want the workout to be that day.

Normally I don’t address these too much but in this case I felt it really needed to be said that there is an actual subtitled episode of Dragon Ball Z called “Episode of Bardock” that shows a possible answer to a big question in DBZ lore that even a casual fan of the series may be wondering about, or a casual observer at recent conventions that saw people walking around with cardboard golden hair. 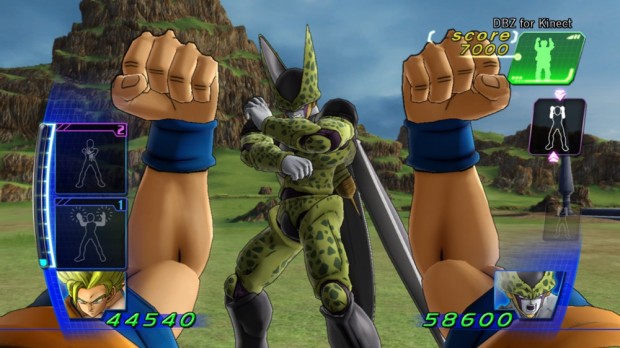 I’m exhausted but satisfied, something I have not said about a video game in a long time.  Normally my hands are sore and my wrists or arms ache but I am all over sore, sweat soaking through every inch of clothing and I feel proud of my video game accomplishments and my workout at the same time.  Parents should pick this up for their kids, adults with even a passing fancy in the cartoons or who think a kick boxing workout might be for them should totally grab this.  Just pay attention to the tutorial and note what works great for you and what doesn’t and this should be a good experience for you.  This game has also given me another satisfaction, the opportunity to recommend another Kinect game.