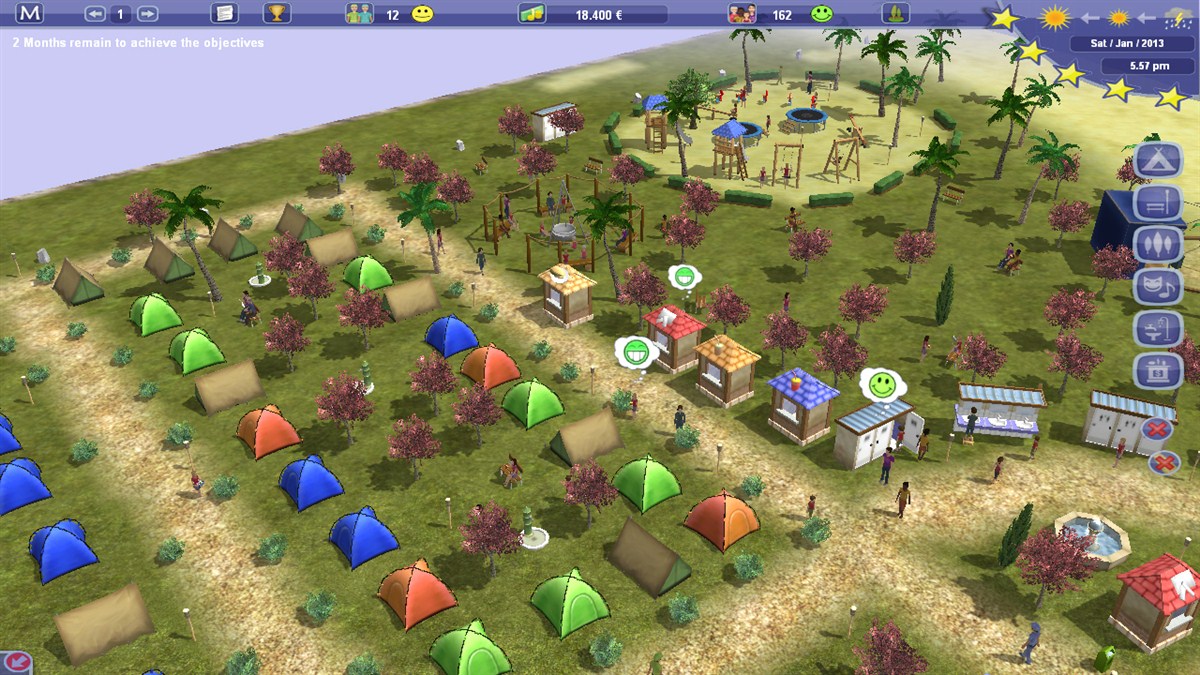 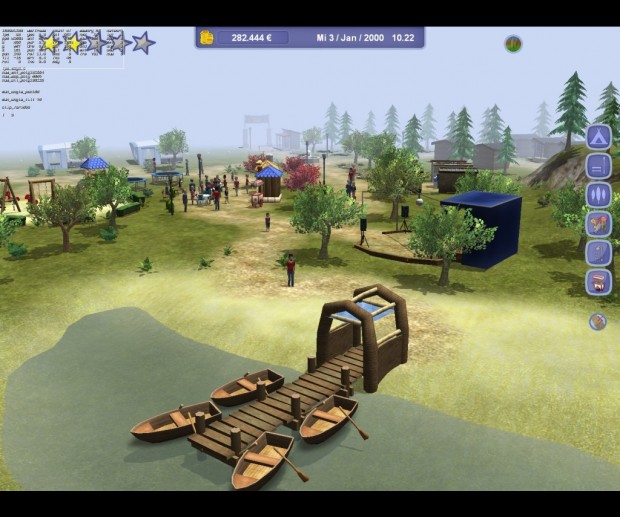 Ok so those of you who read us on a regular basis know I am a sucker for strategy and simulation games which are basically a strategy game using construction instead of construction and destruction.  Sure when I agreed to review Camping Manager I figured I wouldn’t be building armies but I would be trying to strategically build a campground that would meet all the criteria to win.  Building sim games are old and have been around almost as long as computer gaming and some are made in a way that makes you feel that old school nostalgia while having far better graphics.  Excalibur Publishing has done just that in Camping Manager. 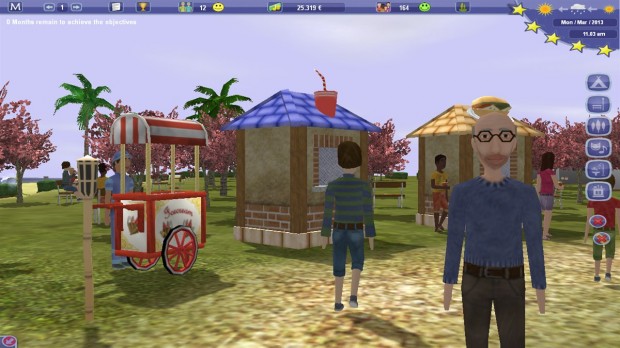 You have been given starting funds to create campgrounds all over Europe and must fulfill certain criteria to be successful to your investors.  Succeed and you get to start up a new site with new funds, fail and you might find yourself living in one of the properties. 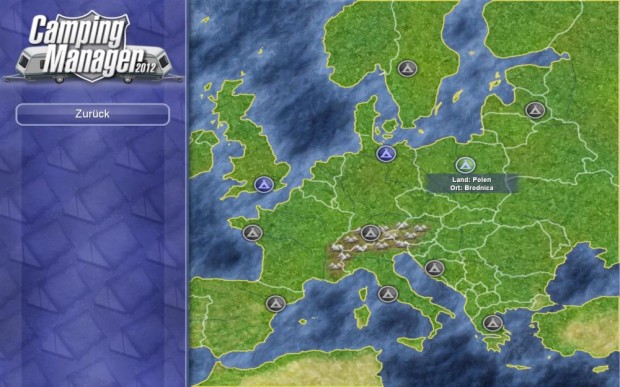 There is a style to the buildable items very reminiscent of the old school building sims though with much cleaner graphic lines and variety of details.  You can build multiple caravan designs for example though they are all the same size space and same amount of occupants.  There are 50 different 3D objects to place on a nicely detailed map which leads to lots of variety.  There are several different designs for the individual holiday goers as well keeping things interesting.  Sound wise there is a general calming music that plays during the building which is nice since it doesn’t create tension in mission that are fairly long.  The voice acting for the intro scenes to the missions is done well, though done in German which is a language I never studied.  English is luckily available on the graphic page description so you know exactly what your mission is. 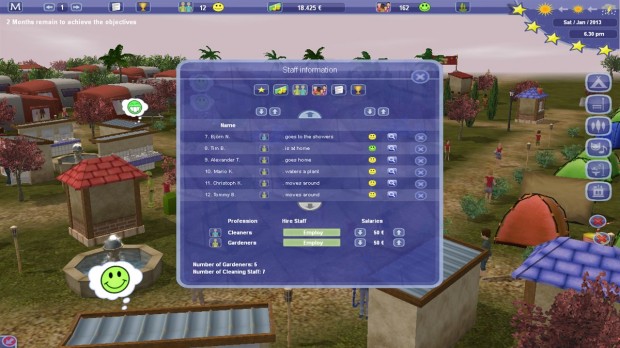 You are given a map, a certain amount of start up funds and mission criteria and left to do what you think you need to to beat the mission.  A great deal of creativity has to go into completing each mission of the simulation, sometimes trying to figure out such questions that every parent asks: how do I get a 70% satisfaction approval from teenagers?  The mission criteria will often involve multiple elements like certain things build, approval levels, money earned, sometimes multiples of each.  Quite often you will have a carefully mapped out plan of building then find yourself adding something willy nilly simply to try to complete a part of the mission.  I have had beautiful campgrounds turned into a weird menagerie of items trying to get that last dollar or last bit of satisfaction. 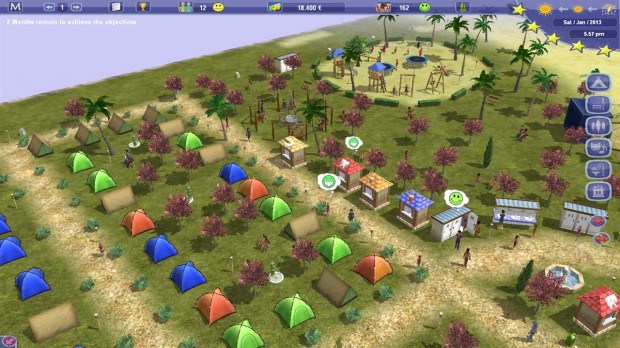 The gameplay is remarkably addictive consider the subject matter.  I know plenty of people who don’t like camping and would probably scoff at the idea of liking a sim game based on building a campground but if any of them are true sim or strategy fans they will find themselves sucked in trying to balance the right number of gardeners and wages to pay them with the amount of trash cans that need emptying and flower pots that need watering.  This game actually should be called Resort Manager because you are actually trying to build a resort complete with disco, barbeque roundups and swimming and boating activities while deciding how many concessions to have, toilers, showers, it encompasses much more than some simple camp sites.  The campsite layouts also follow community designs you might find in most city sims so if you just try to make some winding road to place your campsites on you will soon find yourself stuck for space just as you have to leave space around properties for lamp posts, trash receptacles and water taps.

There is also free play in case you just want to test your building designs without the concerns of completing mission objectives which can be really fun sometimes, just building what you can, creating the best place you can. 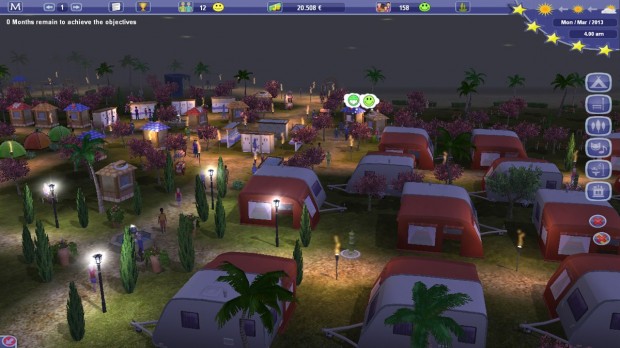 This game is surprisingly addictive and the name doesn’t do justice to the depth of play and necessity of creative strategic thinking.  You aren’t just managing a campground you are building a camping resort using all your wits to complete missions which can have extremely difficult objectives.  I recommend it for any one who considers themselves a sim or strategy fan, regardless of what subject matter they usually prefer.  This game is just a solid example of the genre. 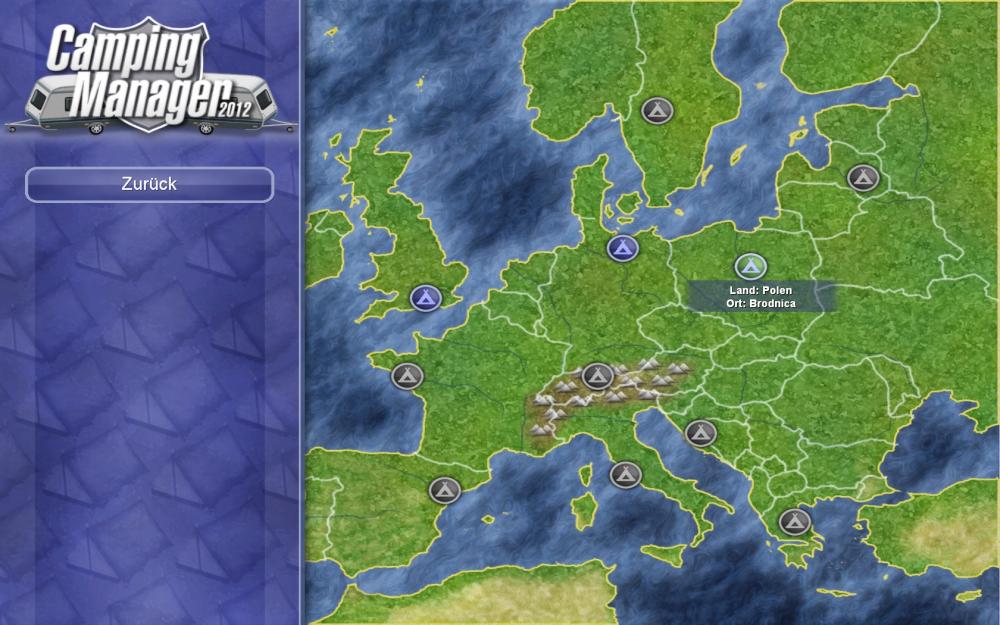 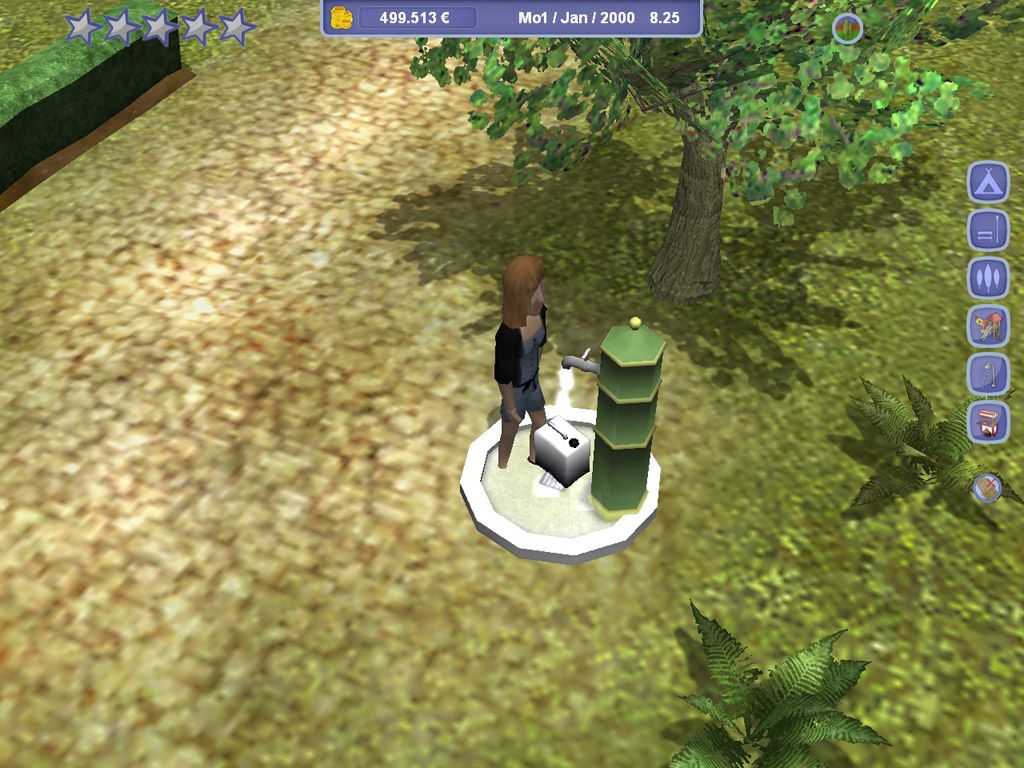 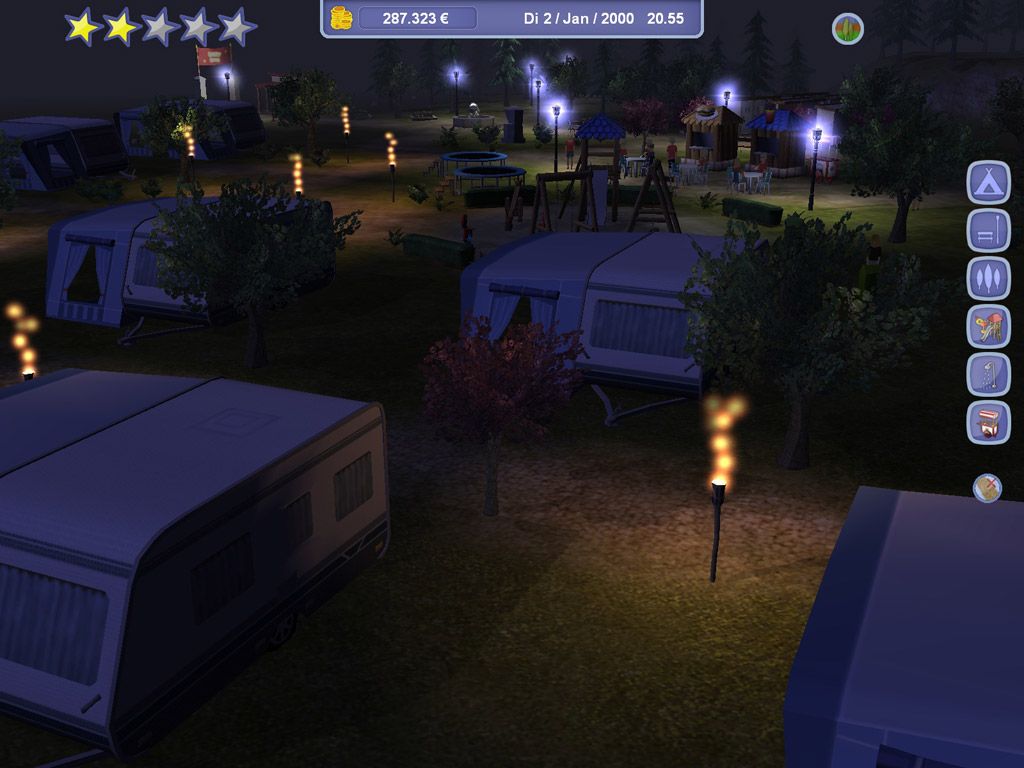 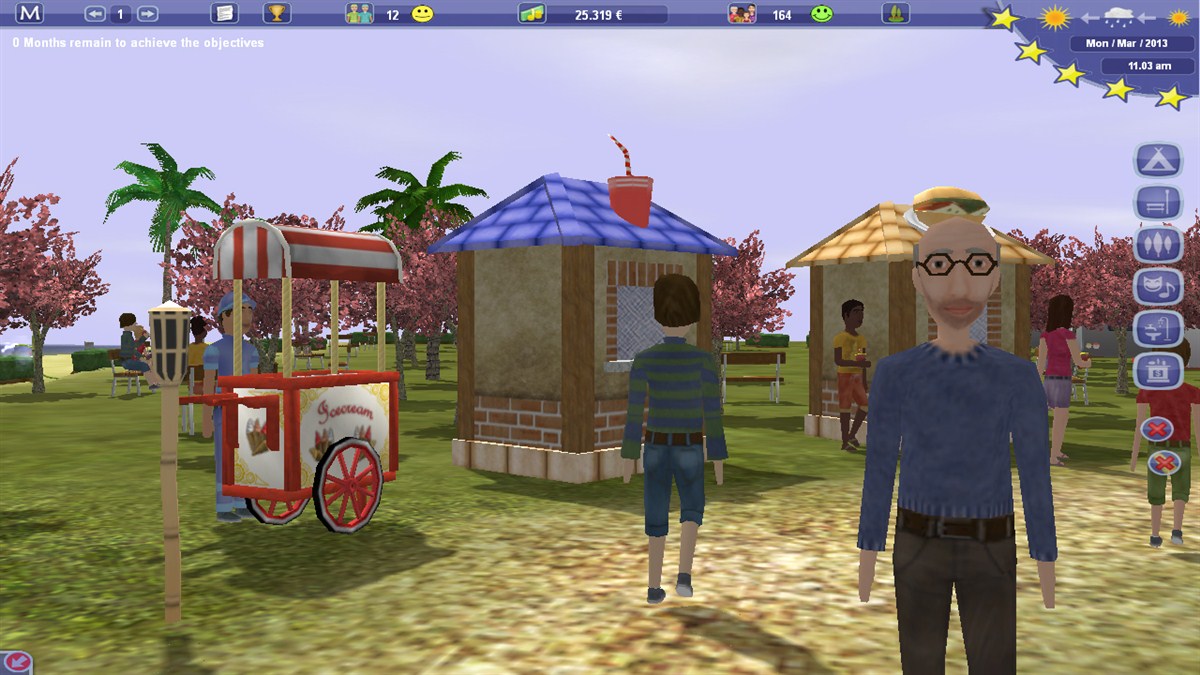 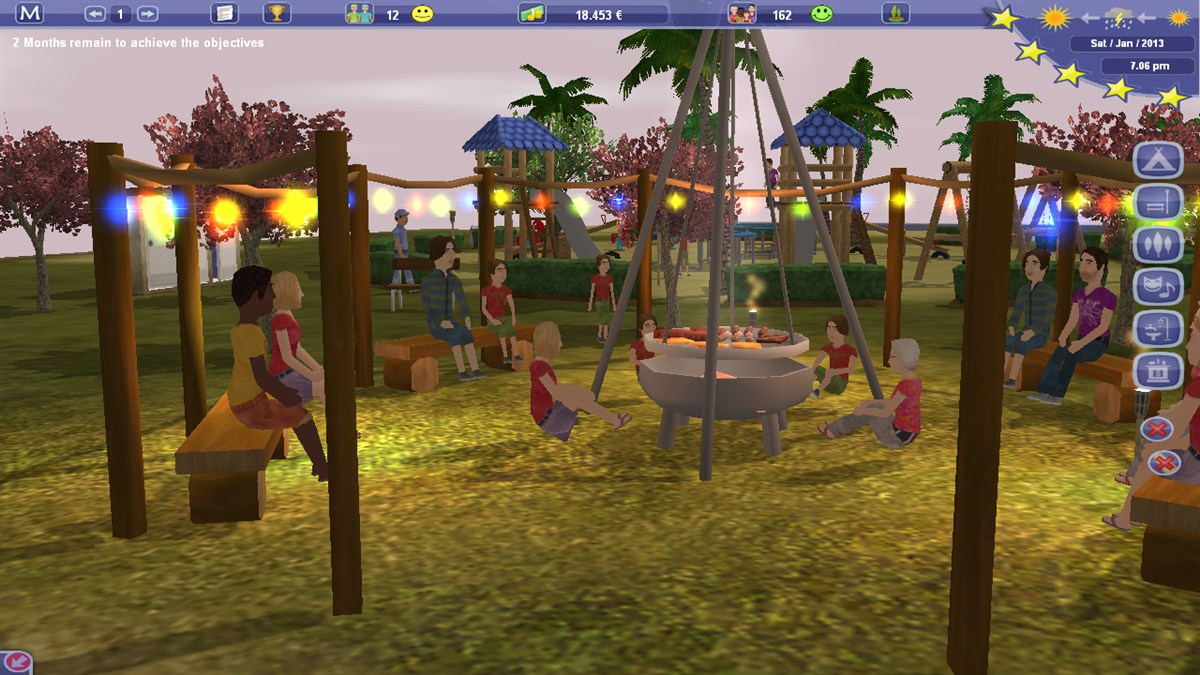 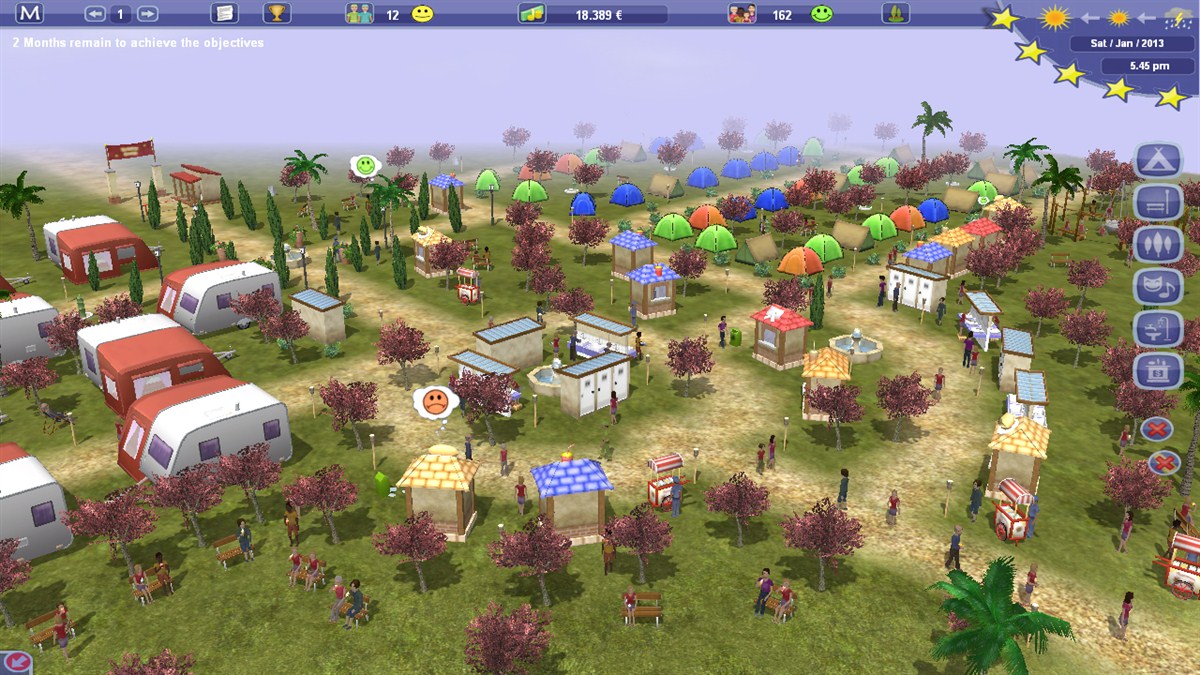 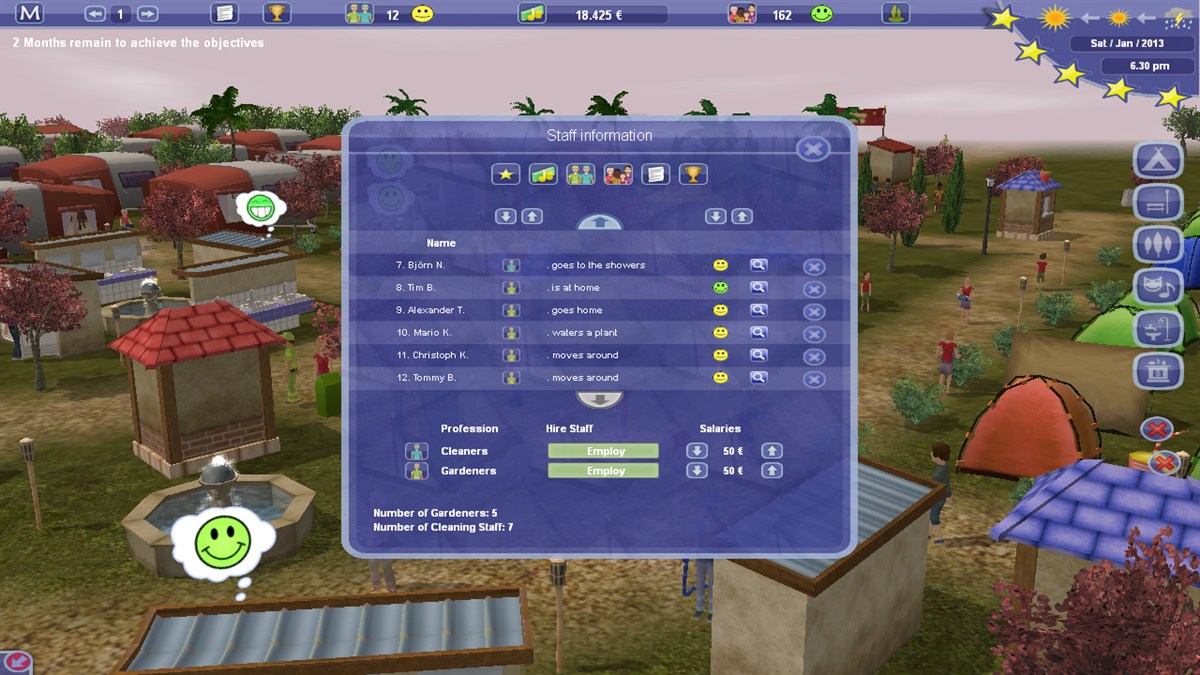 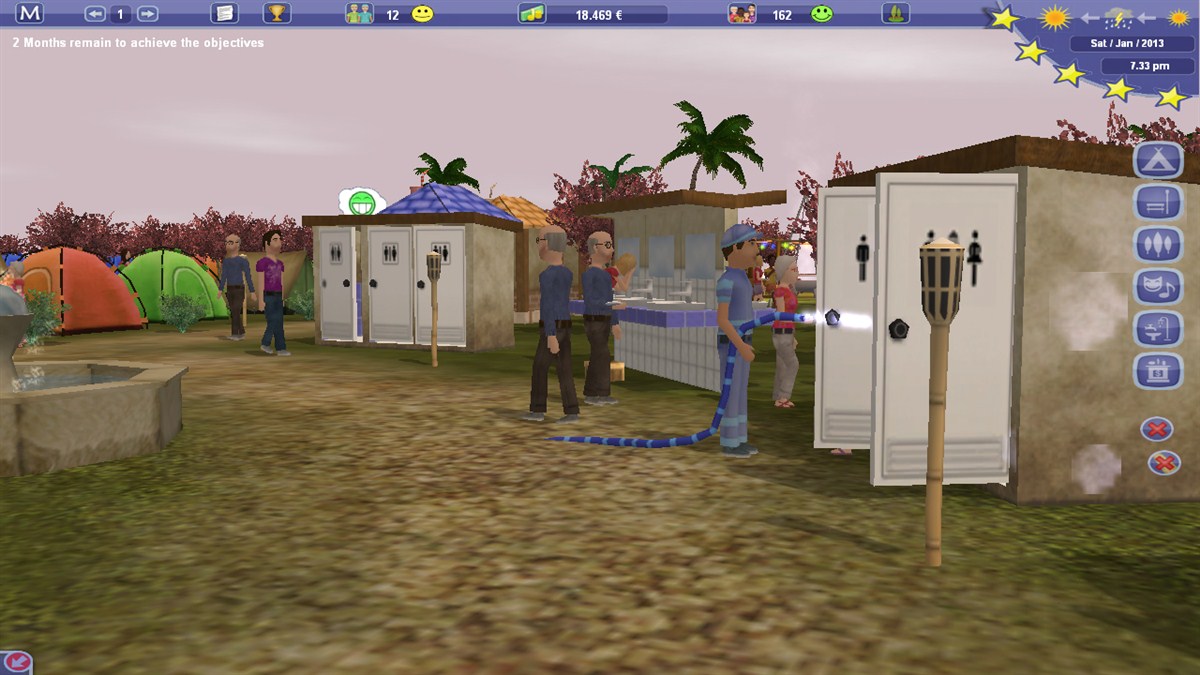 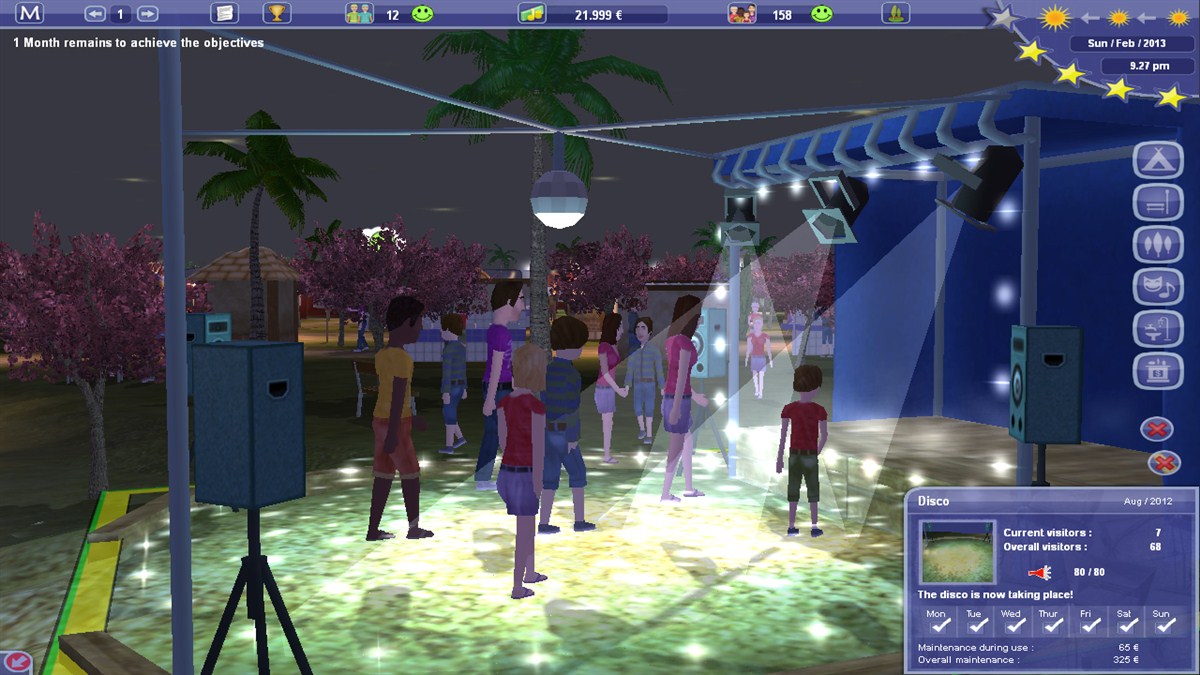 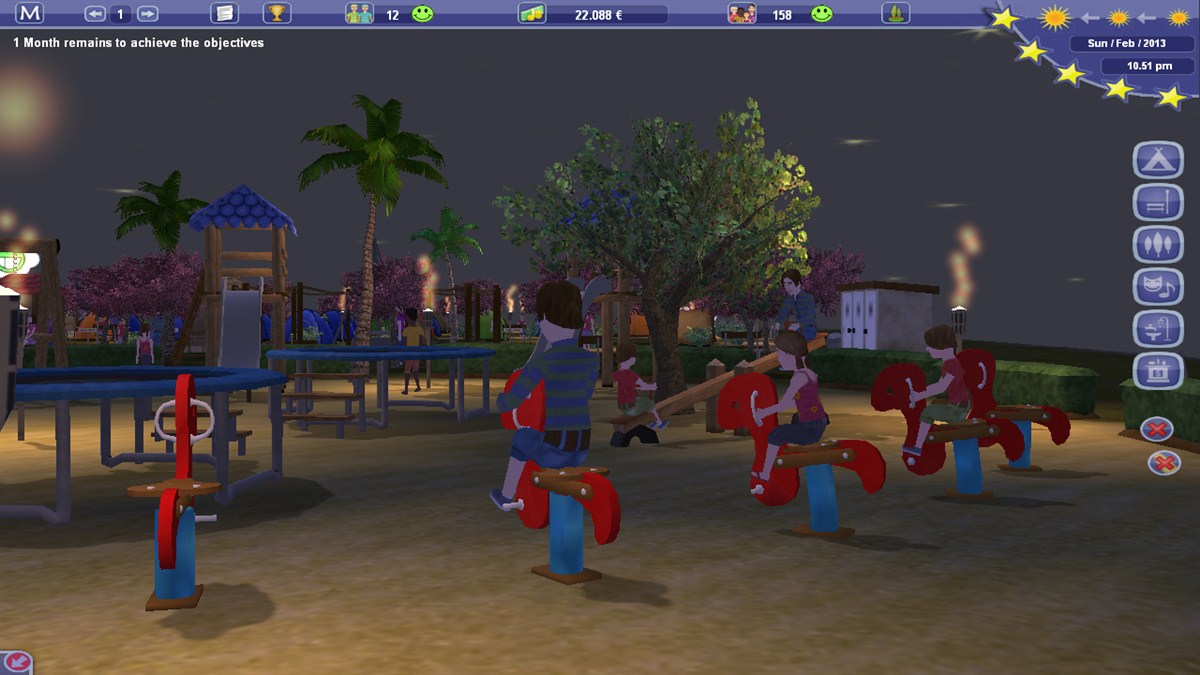 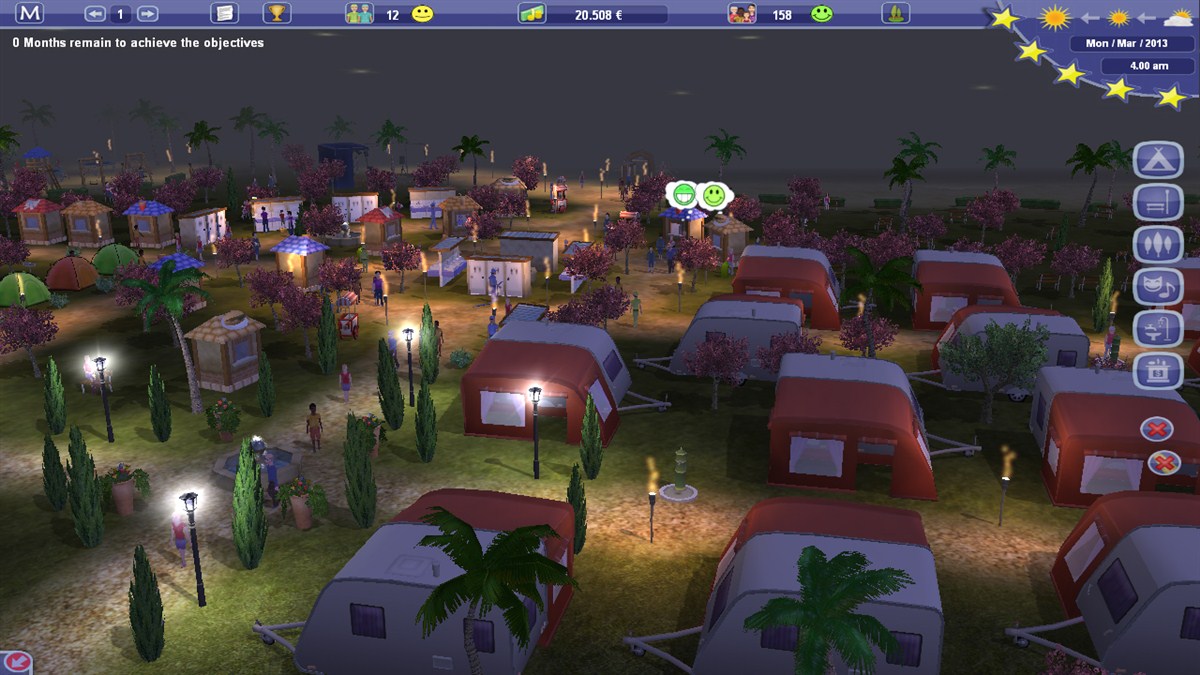 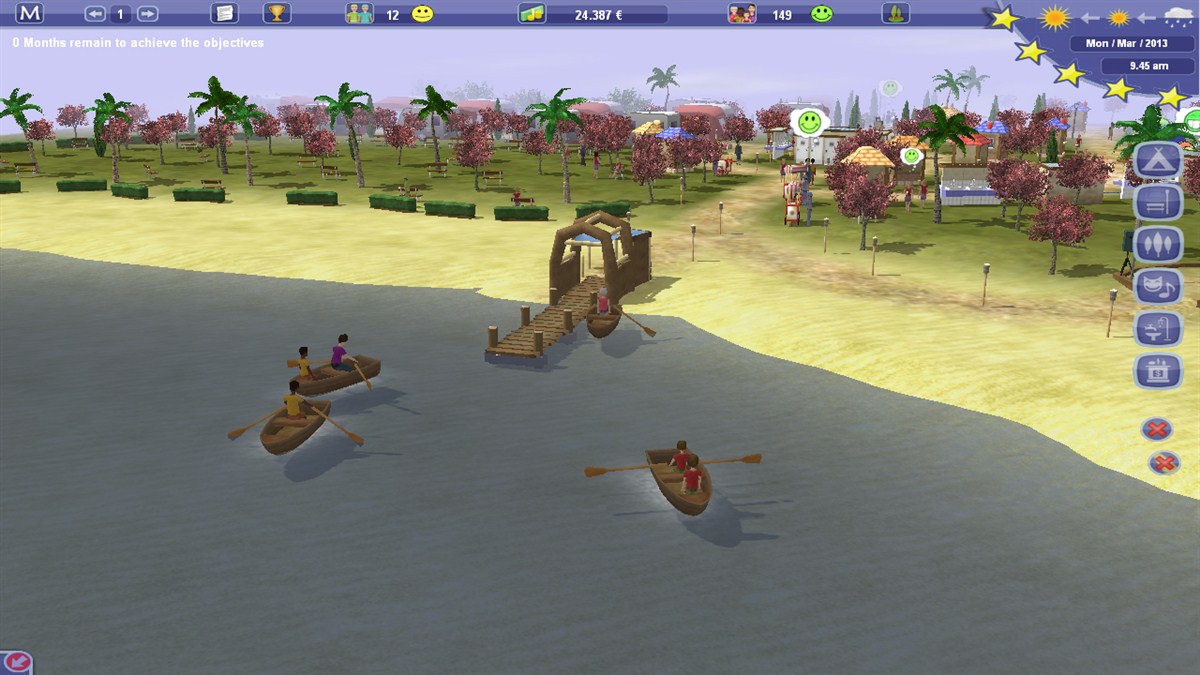 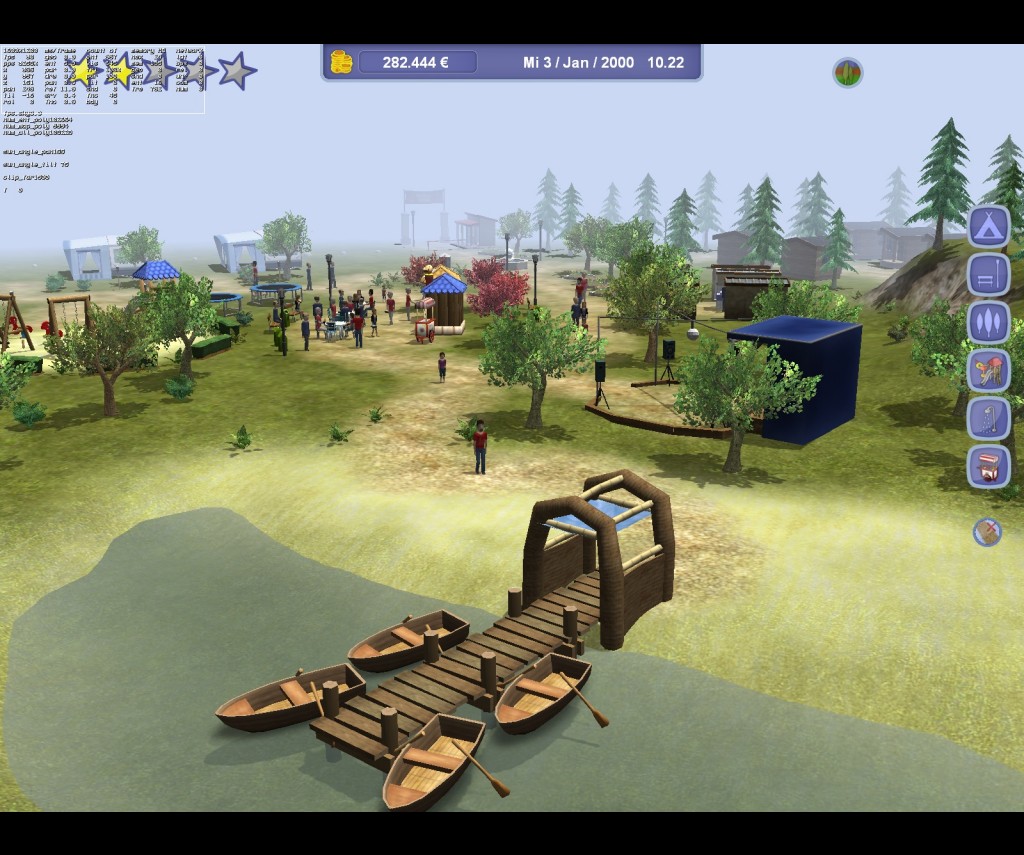 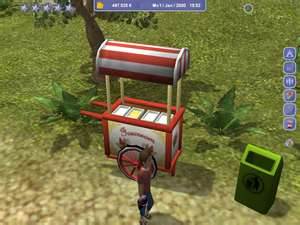