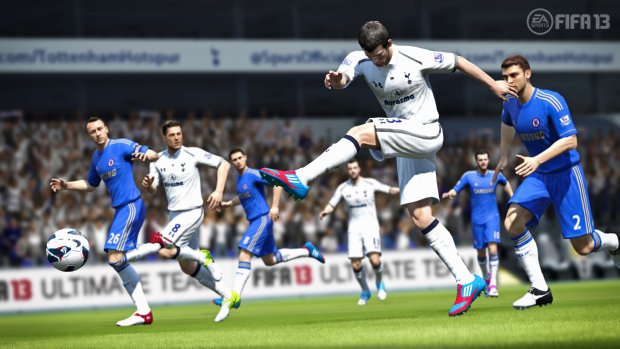 Momentum in North America was fuelled by a launch event in New York hosted by Snoop Lion that propelled the hashtag #SnoopsFIFA13 trending in the United States and worldwide on Twitter, midnight openings at over 2,000 retail stores across the country, and game quality. Critics are praising FIFA Soccer 13 with 39 review scores of 90 or above.Eurogamer Spain awarded FIFA Soccer 13 a perfect 100 score, Multiplayer in Italy called it the “best FIFA ever” and JeuxVideo Magazine said “FIFA 13 approaches a form of perfection.”

It was also a record-setting opening for FIFA Soccer 13 on iOS around the world. FIFA Soccer 13 for iPhone, iPod touch and iPad achieved the biggest launch-day performance of any EA iOS game in history, with downloads up 62 percent over last year*.  FIFA Soccer 13 also hit No. 1 in Top Paid Games in 55 countries and No. 1 in Top Grossing Games in 24 countries on the App Store^.

Similar to North America, there is unprecedented anticipation for FIFA Soccer 13 around the rest of the world. For the first time in the history of EA SPORTS, over 1.3 million games** (and still counting) have been preordered worldwide, pointing toward a historic opening when the game launches around the world on Friday.

“We’re thrilled that fans throughout North America have embraced FIFA Soccer 13 in such a big way,” said Andrew Wilson, Executive Vice President of EA SPORTS. “North Americans appreciate a great-playing game and their level of engagement with our game is helping to drive the sport’s popularity in the United States.”

During the month of September four North American cities—Los Angeles, New York, Toronto and Chicago—trailed only London, England, among the top five cities^^ with the most engaged fans among the 10 million fans in the EA SPORTS soccer community on Facebook at http://www.facebook.com/easportsfifa. Additionally, the FIFA Soccer 13 demo was played by 294,000 first-time FIFA Soccer fans in the United States. In a story published Tuesday on ESPN.com that can be read here http://es.pn/OnKiwc, leading soccer journalist Roger Bennett credited the EA SPORTS FIFA Soccerfranchise as being a key driver in the popularity of soccer in the United States.

FIFA Soccer 13 captures the unpredictability of the real-world sport with breakthrough features like First Touch Control that ensure no two matches ever play the same, and new online services like EA SPORTS Football Club Match Day that completely connect FIFA Soccer 13 to the real-world season for the world’s top leagues. The FIFA Soccer 13 demo is available through Origin™, Xbox LIVE® and PlayStation Network. FIFA Soccer 13 trailers, screenshots and fact sheet are available at http://info.ea.com.

FIFA Soccer 13 will be available for now in retail stores throughout North America, and as a digital download throughOrigin. The videogame is available for the PlayStation 3 with PlayStation Move support, Xbox 360 with Kinect™, PlayStation®Vita handheld entertainment system, Nintendo Wii™ console, PC, PlayStation®2 computer entertainment system, Nintendo 3DS™, and PSP® (PlayStation®Portable) system and November 18 on Nintendo Wii U™ system. The game is available on the App Store for iPhone, iPad, and iPod touch. FIFA Soccer 13 is rated E for everyone by the ESRB and Pegi 3+.

*According to internal data