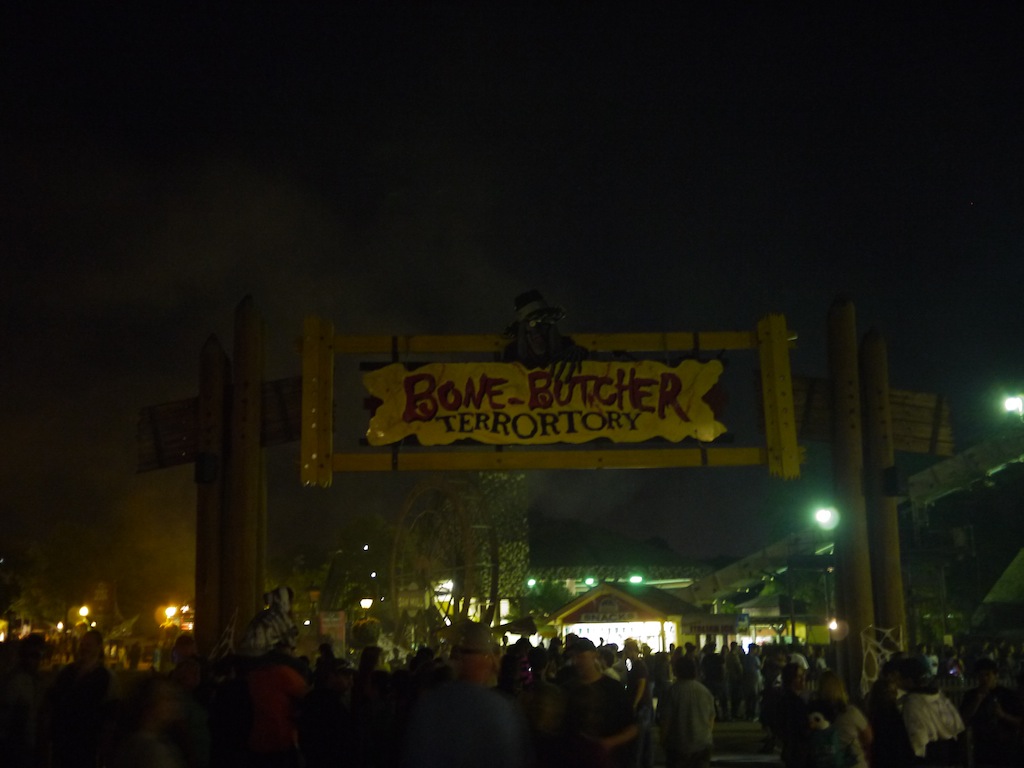 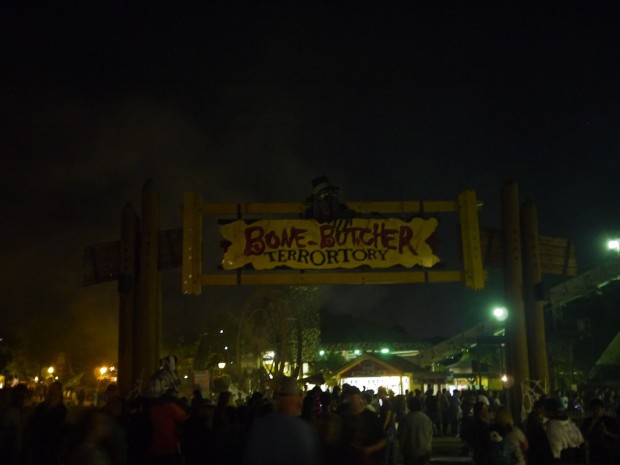 It came from nowhere. I pick up my pace. Not yet a run, but I know I need to move faster. I hear screams behind me. First a handful – then more. I turn around to try to glimpse where they came from, but I can’t see past the miniature horizon of heads pushing up behind me, intolerant of my brief pause in forward momentum. Faster now. We have to get out. If not an exit, then perhaps some sheltered corner where we can huddle in fear, a sanctuary to cower under until the danger passes.

We thought we were prepared. But not for this.

As an oppressive cloud of fog rises from the central square’s gushing Bloody Fountain, I finally notice I’ve lost my partner. I spin frantically, trying to spot her amongst the river of faces rushing in one seamless motion past me. Nothing. Soon the endeavor is futile; the fog is all around us now. I fumble in the darkness, and despite the shouts of terror all around me, I feel helplessly alone. Figures rush past me, but in this grey haze, they are but silhouettes masked in shadow. It feels heartless, but I don’t have time to worry about her. I need to keep moving. It’s not safe where I’m standing – I’m getting wet and I don’t have an umbrella.

A Layout for Fear

Fright Fest is a collection of haunted mazes, live comedy and music shows, and scare-oriented, on-the-street ‘performance art’ running at Six Flags theme parks through late-September and most of October. As Halloween approaches, there are a number of holiday-appropriate daytime attractions specifically tailored for families, though this article focuses primarily on the ‘night’ portion of Fright Fest.

The event kicks off at 6 p.m. with The Awakening, a brief stage show designed principally as an excuse for its actors to perform Michael Jackson’s Thriller, which is fine. From there, the park opens up to a generously spread array of persistent mazes and scheduled stagework, with costumed Six Flags employees spattered throughout to casually chase you down with a menacing stare and a loud shout if you risk turning your back to them.

The lines for the Terror Trails – tightly contained walks through scare-lined avenues – are long. Arguably not-worth-it long, given the additional fee required. It certainly didn’t help that the crew of Great Adventure were woefully unprepared to organize the throngs of guests trying to get in on opening night, resulting in a lot of confusion and waiting. Personally, a lifetime of video games left me somewhat unresponsive to the pop-out scares of the maze.

Sea Lion Scary Tales, a reimagining of a classic fairy tales with, yes, sea lions is…well, awful. Truly. So much so it eventually circles around to become oddly humorous. There were so many missed queues, flat punchlines, and embarrassed fourth wall breaks, with a grown man in fairy wings and his underwear impersonating (ugh) John Travolta – look, I can’t in good conscience continue piling on people who have to act opposite sea lions, which perform impressively on the few occasions they decide to obey stage commands. Just don’t go.

Sea lions. No respect for the craft.

The single, most impressive spectacles are actually the ones that have nothing to do with frights. The Circus of Thrills is an assortment of acrobats and stunt-performers recklessly putting their lives in jeopardy for your amusement. It is (too briefly) fabulous. Down the road, Doc Swan’s Sideshow of Oddities is a low-key freak-and-magic show with simple tricks and humor, but performed sincerely. It works without overly trying. “Here’s a quick joke – now I’m going to put a nail up my nose. Want me to swallow fire? Here goes.” It takes genuine pride in itself, which feels like an underlying rule for what makes for a good attraction.

In fact, for all the attention zombies get, Six Flags might do well to notice how well their cavalcade of daredevils, weirdos, and evil clowns works as a carnival of feats and horrors and expand upon it. It stands out as the best of the Fest.

The Limits of an Experience for Everyone

Even after seeing it firsthand, I don’t think I fully appreciate how difficult the concept of a ‘scary theme park’ is to execute. The concept is intriguing: take a family-friendly amusement park and twist it into a dark, frightening version of itself. But the reality – practical and legal – of doing that with a park of this scale is probably staggering. And it goes far beyond the simple things – the myriad of set pieces, fire-fueling propane, dry ice, make-up, costumes, and additional workers. Once you recognize the on-staff ghouls are allowed to spook and menace but are prohibited from physically touching you, the complicated web of guidelines Fright Fest is likely built upon starts to become apparent.

“Scare the guests. But you can’t touch them in any way or we’re liable. Try not to scare little children too much – they may cry, or run away and fall. Be careful with any beleaguered-looking parents or the elderly. Watch out for guests carrying beverages or expensive cameras or infants – basically anything that can be spilled or dropped upon a sudden surprise. Who can you scare? Ummm….teenagers? Yea, you can definitely scare teenagers. Go nuts. They probably deserve it.”

No matter how scary you’d like your experience to be, at the end of the day, Johnny Rockets still needs to be Johnny Rockets. The gift shop still needs to be a safe place to buy Looney Tunes merchandise in peace. Theme park restrooms are terrifying enough on a normal day as is, never mind attempting to give them a spooky twist. Scary sights need to be spread out across the park to avoid overcrowding. Given the variety and quantity of attendees the park must cater to, there are limits to what Six Flags can do with Fright Fest, and while it’s disappointing in my opinion, I understand it.

Fright Fest’s challenge is to craft an experience that routinely warns its guests is not appropriate for children under the age of 12, one “geared to teens and adults,” knowing full well parents will bring their small children anyway.

Doing a Lot with a Little

None of which is to say the experience is necessarily bad. Just tame. And while I have some fundamental problems with the core design of Fright Fest, there were moments peppered throughout that, if not a scream, at least elicited a happy laugh from me.

I want to single out the actors and staff who make Fright Fest possible. My gripes aside, by and large, the rank-and-file employees making it happen are tireless, engaging, immersed in their roles, and, gracefully, pros. They work their butts off for what I’m sure is often a thankless job. There seems to be no discernable way to tell if a teenager will respond to a scare with a scream or a profanity-laced eye-roll. They just have to deal with it. If you come across some of the really great performers, try just following them for awhile as they target other guests.

If there’s a single problem with the crew dedicated to frightening park-goers, it’s that there are too few of them given the swarm of guests they’re performing for. The roughly 150 ghouls of Fright Fest are hopelessly outnumbered compared to the thousands of park attendees they wade between. My nightmares are now populated by an endless sea of people from the greater NY/NJ area standing between me and my destination.

In fact, the saving grace of the Terror Trails is that access to them is gated – which results in longer lines, but evens the proportion of guests to ghouls so that you can actually appreciate their full attention.

And to Great Adventure’s credit, several people who were not me seemed to enjoy themselves a great deal. I wholly recognize that I am not the target demographic for this kind of event. Fright Fest is mainly for children and teenagers – yes, even those ‘too young’ for it, according to Six Flags’ own recommendations – and many patrons I observed seemed genuinely pleased and scared in equal measure. As for me – well, I watched Battleship earlier this year and can never feel terror or joy again.

Moreover, your ticket isn’t exclusively for Fright Fest – your price of admission covers all-day, full park access, most of which remains running at night. Bonus: the special attractions of Fright Fest do a nice job of drawing crowds away from the park’s normal rides, so it’s not a bad deal even for those who just want to stick to the everyday scares of freefalls and roller coasters.

As an outdoor amusement center, Six Flags is highly vulnerable to the whims of weather. My own time at the park was cut short by a powerful thunderstorm, which closed down nearly every attraction and sent the vast majority of park attendees fleeing for the exit. Although I tried to witness as much as possible, please note that my experience was a curtailed version of Fright Fest’s opening (still-working-out-some-kinks) night.

Fright Fest is…okay. Thankfully, the whole of the Six Flags experience is better, assuming you can avoid the lines. But for real terror, never doubt the scaring power of good, old-fashioned Mother Nature. Learn from our tragedy – bring a jacket. 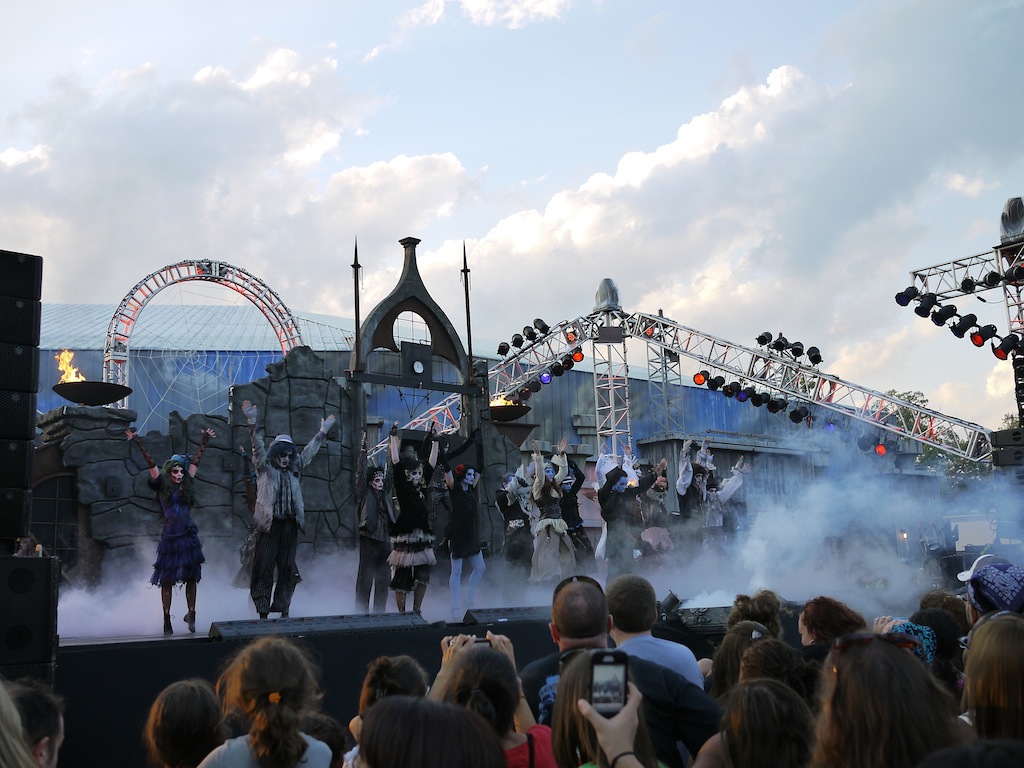 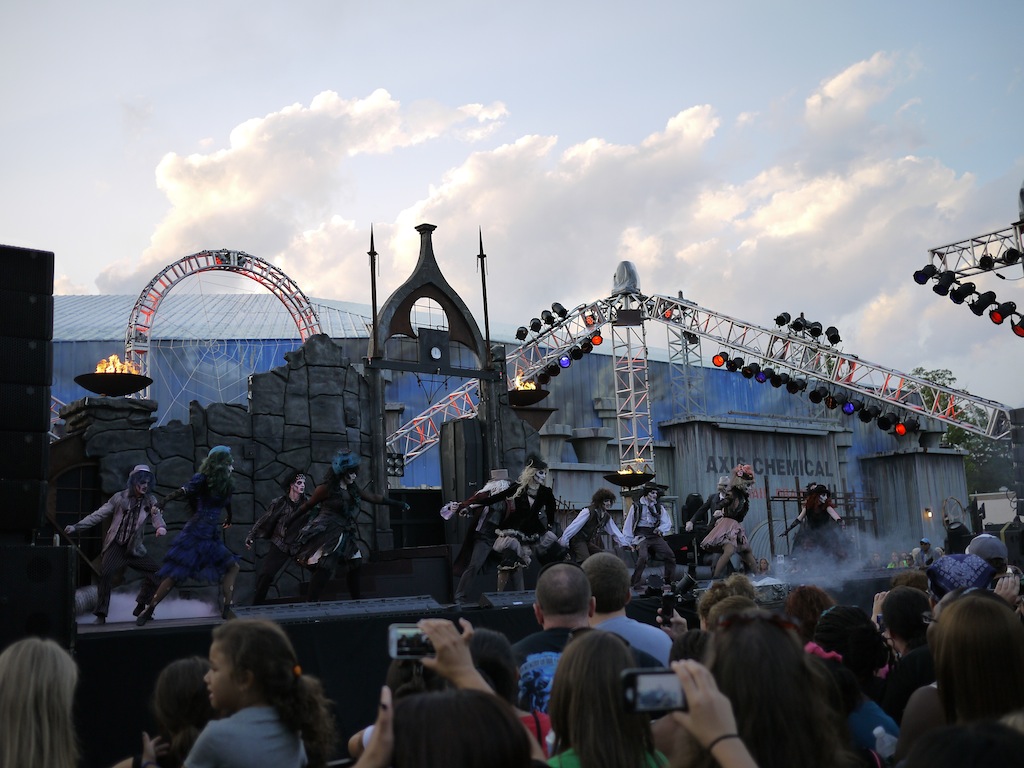 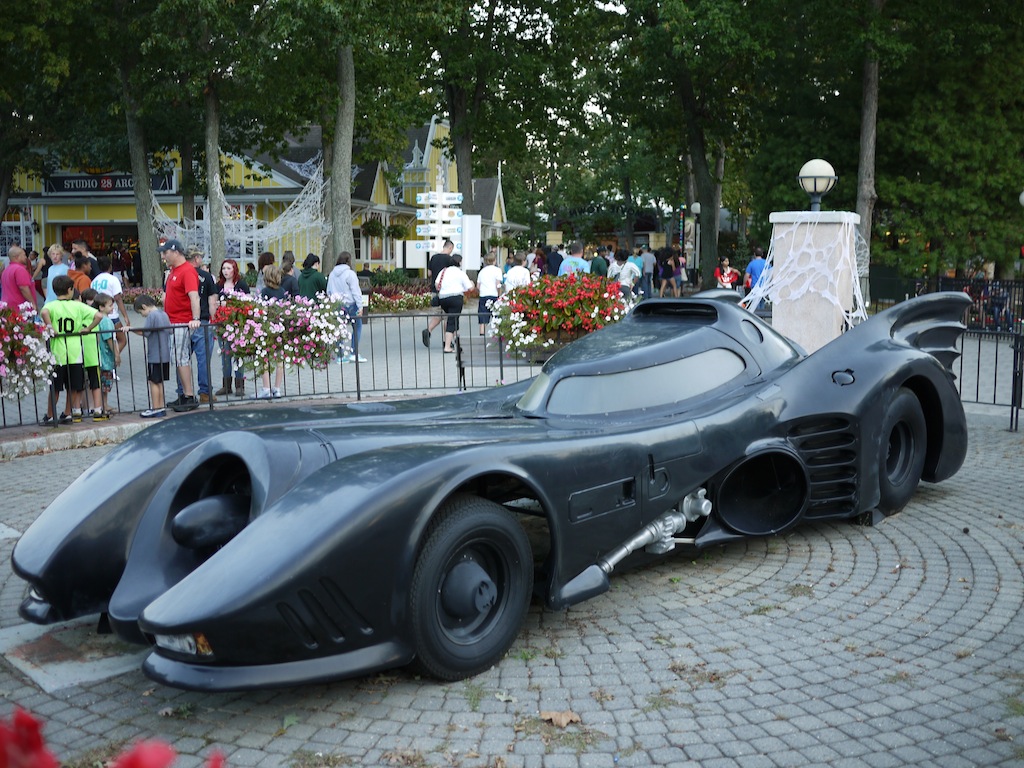 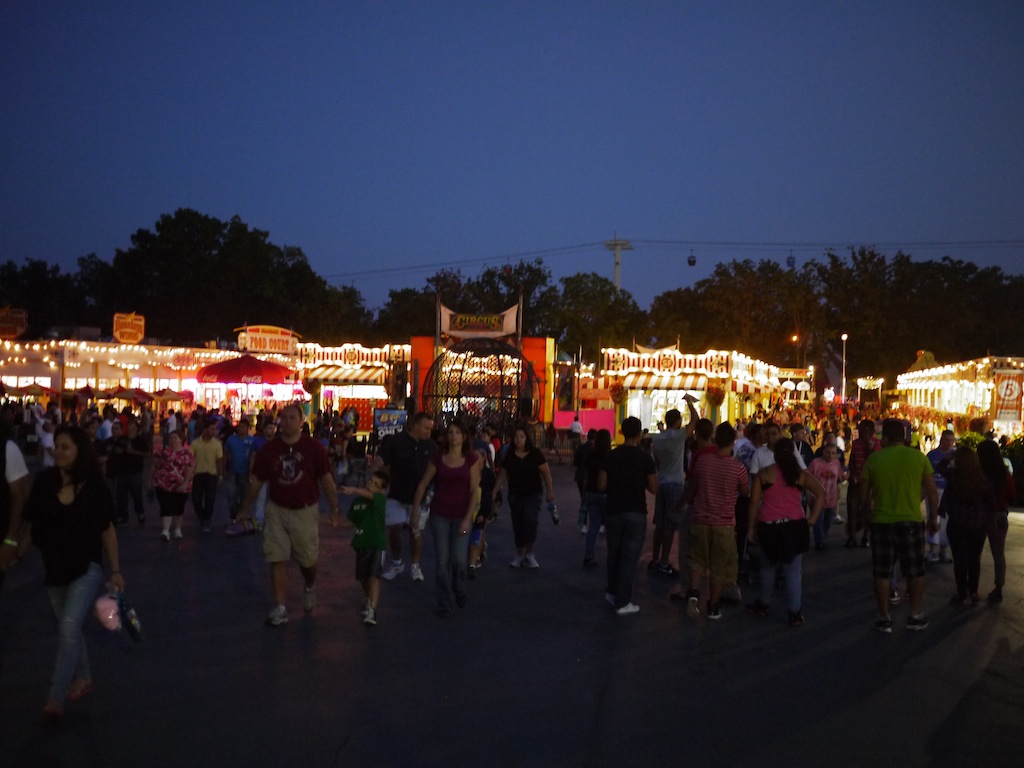 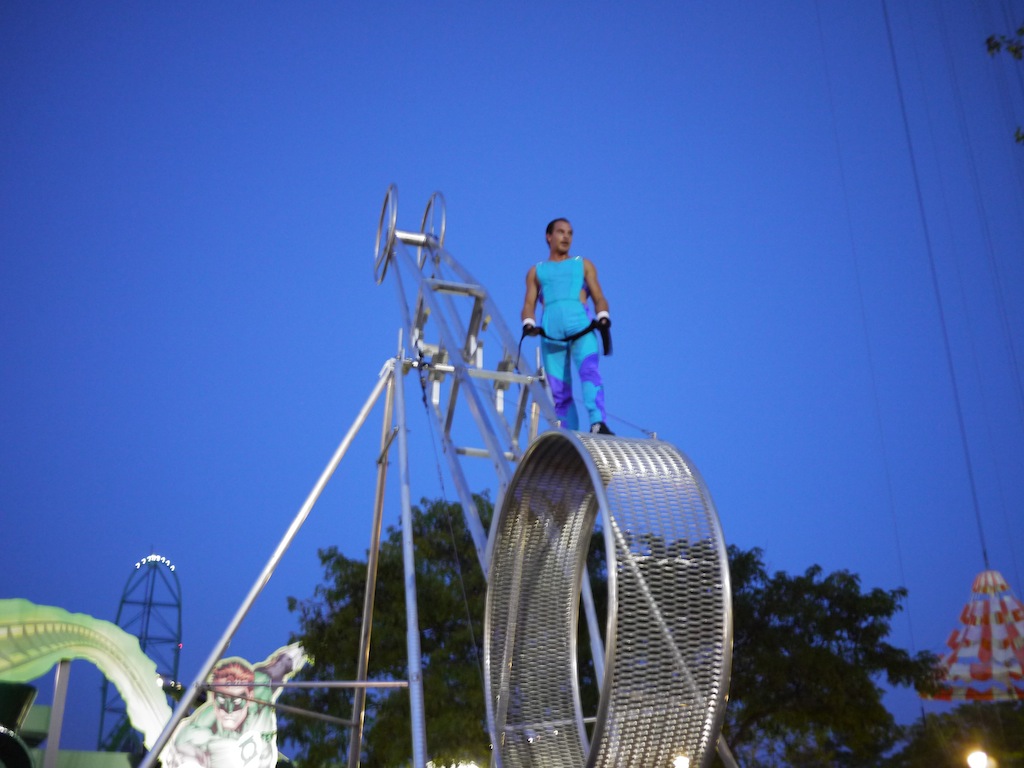 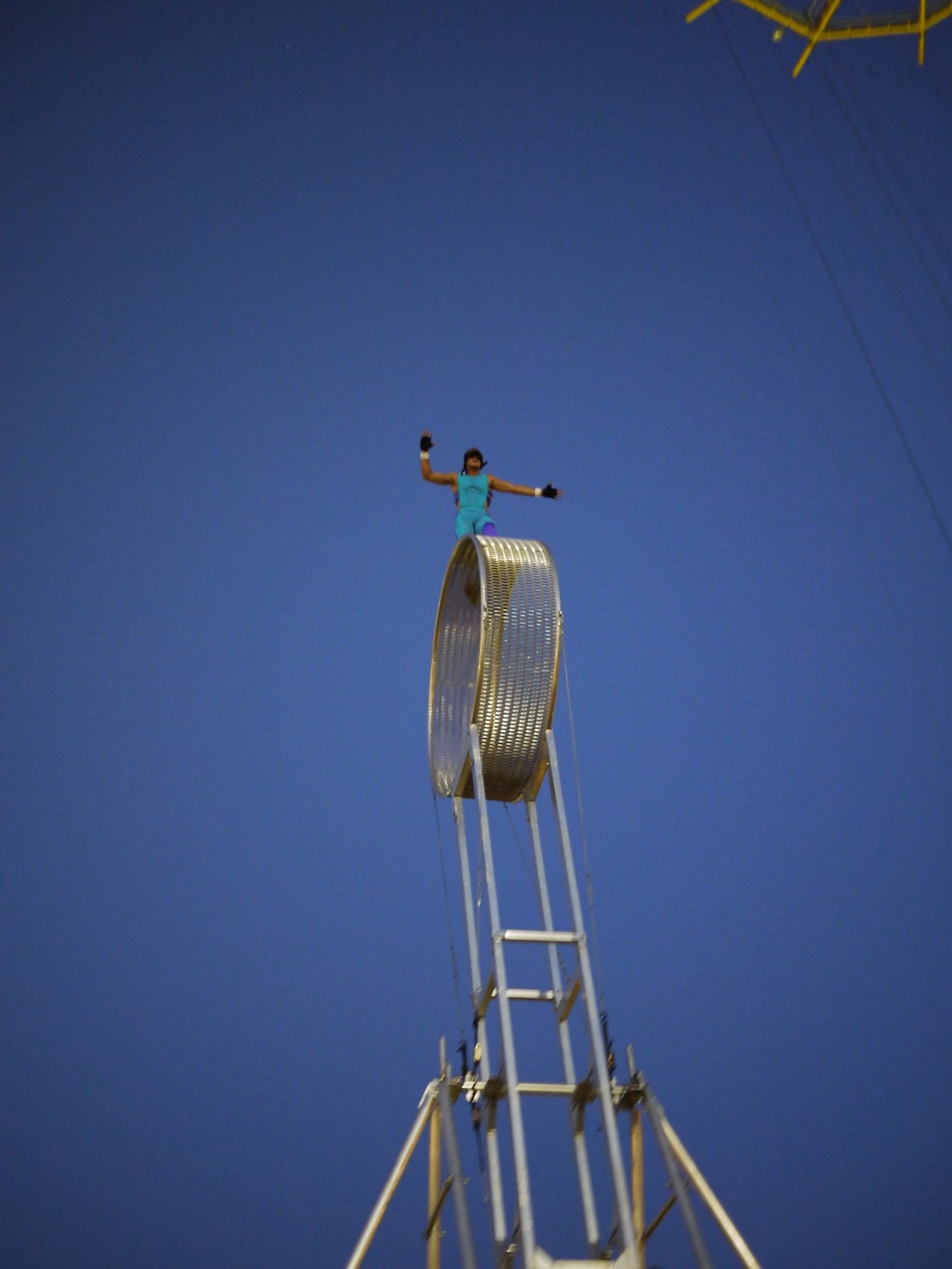 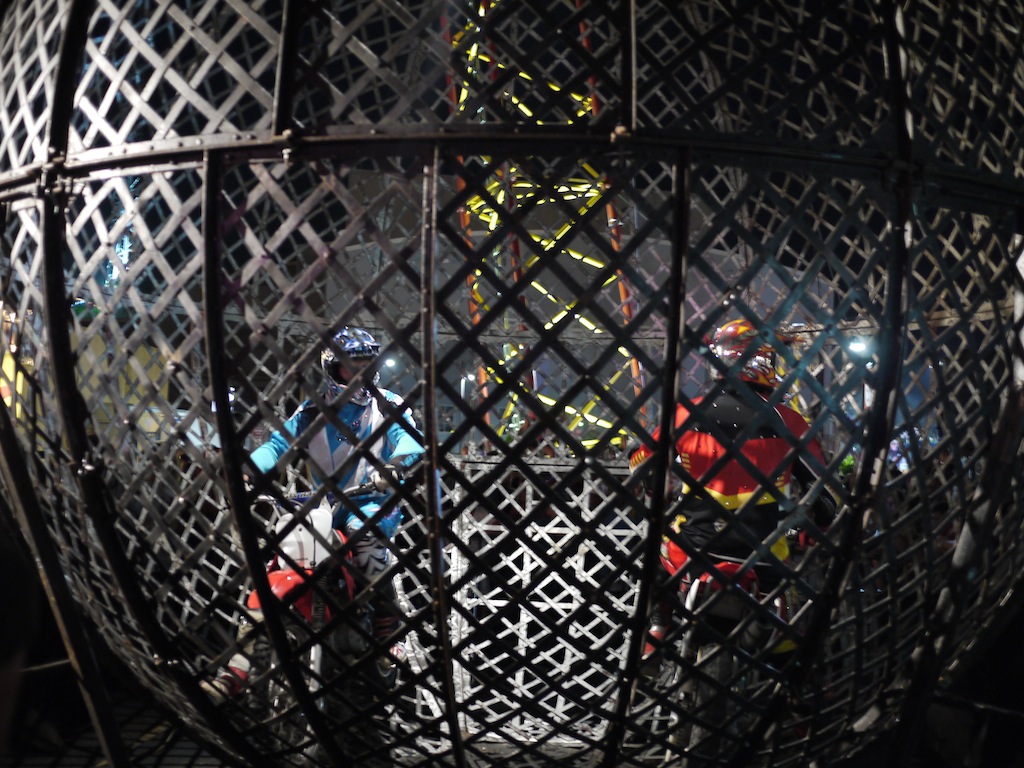 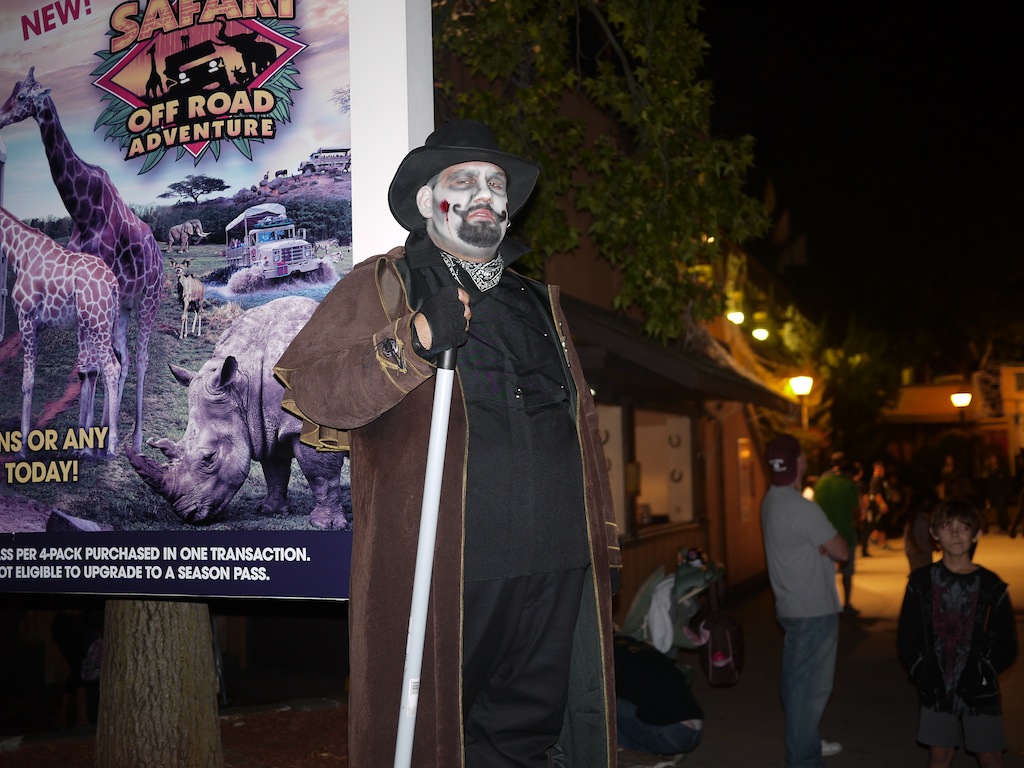 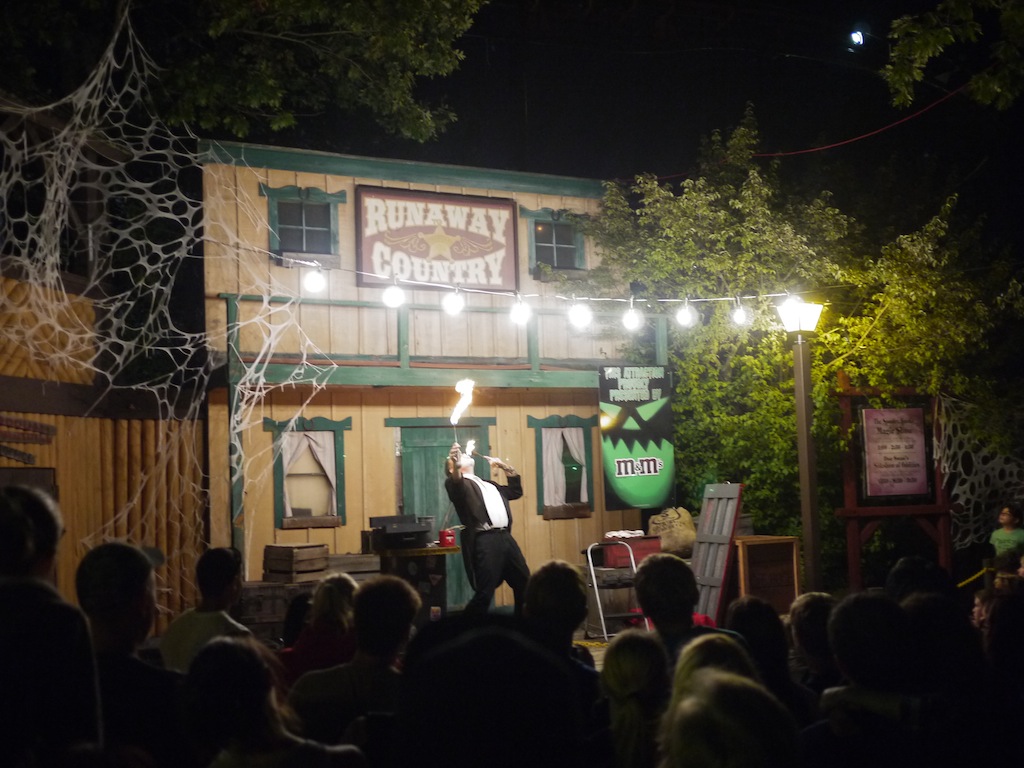 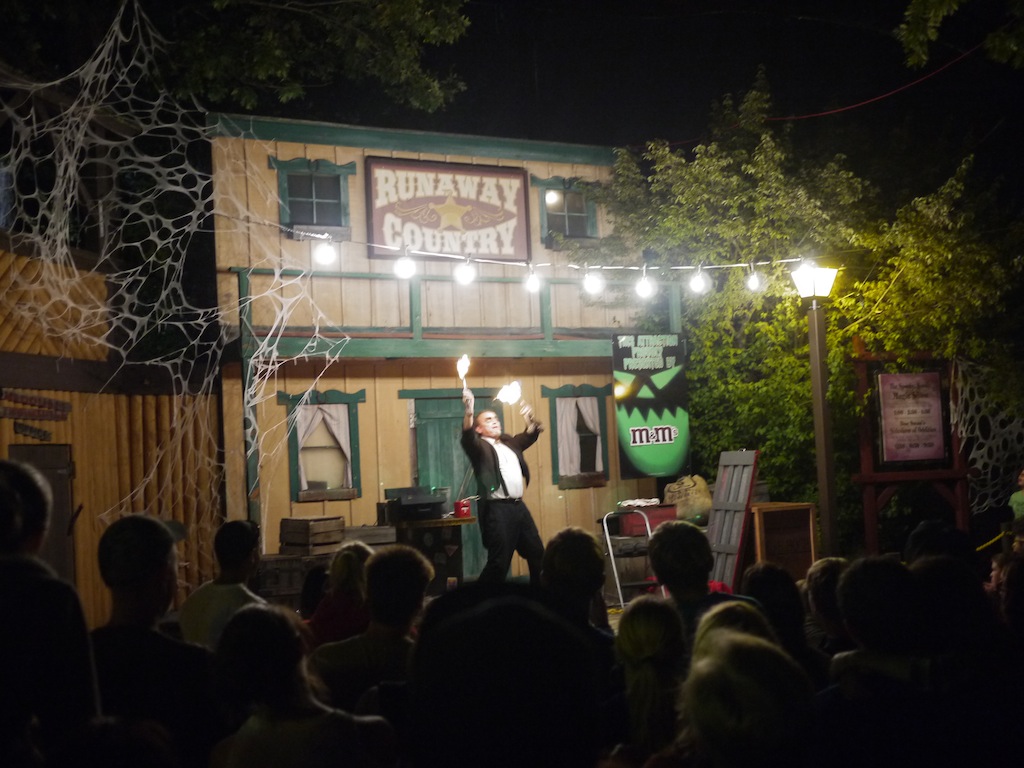 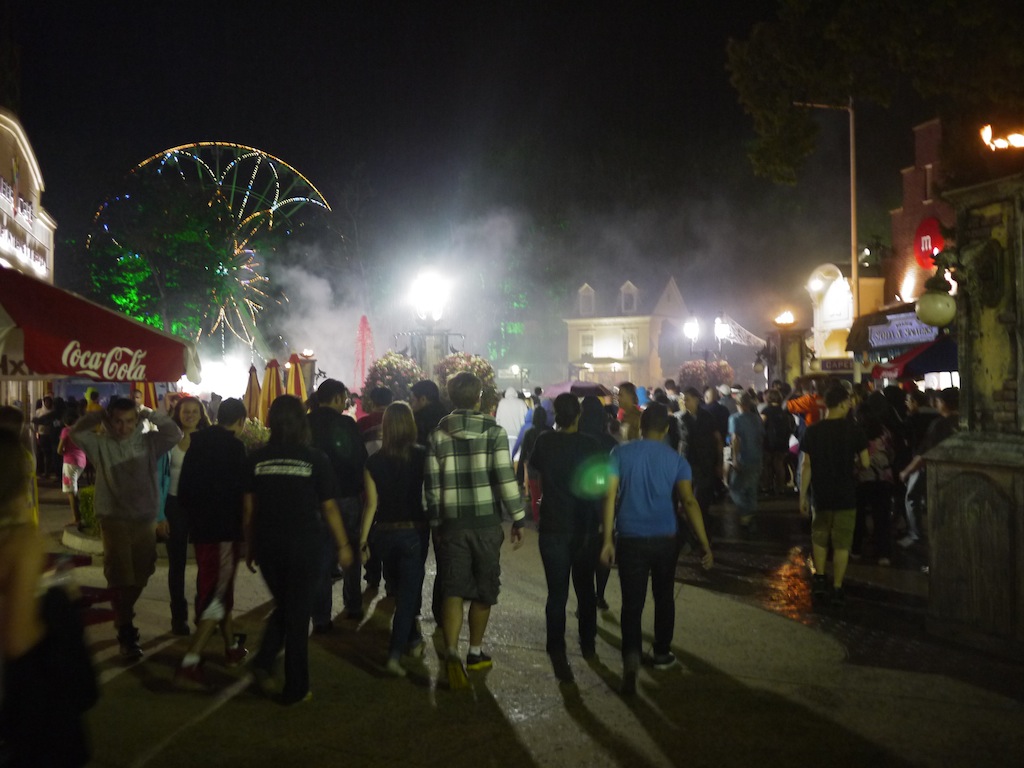 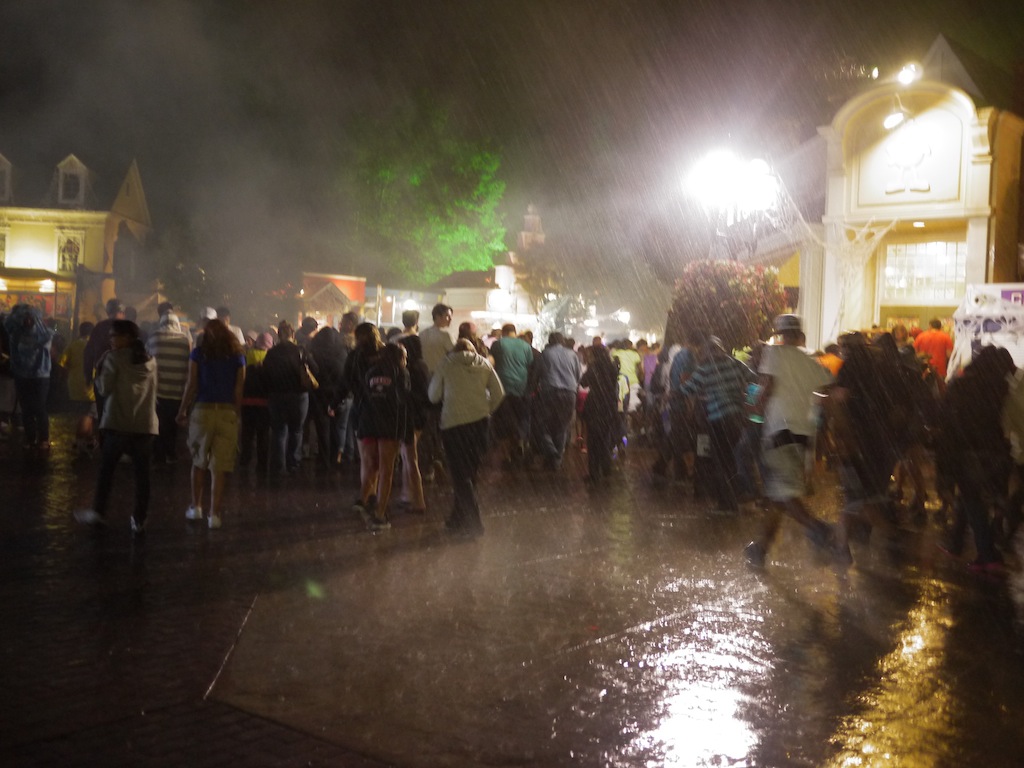 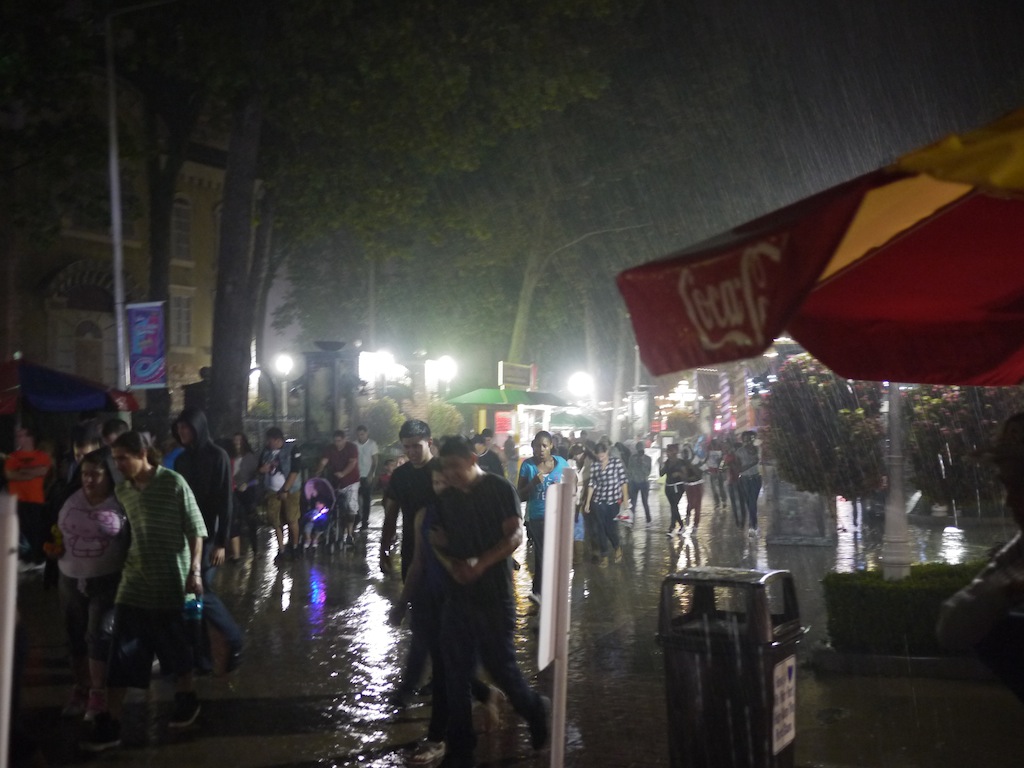