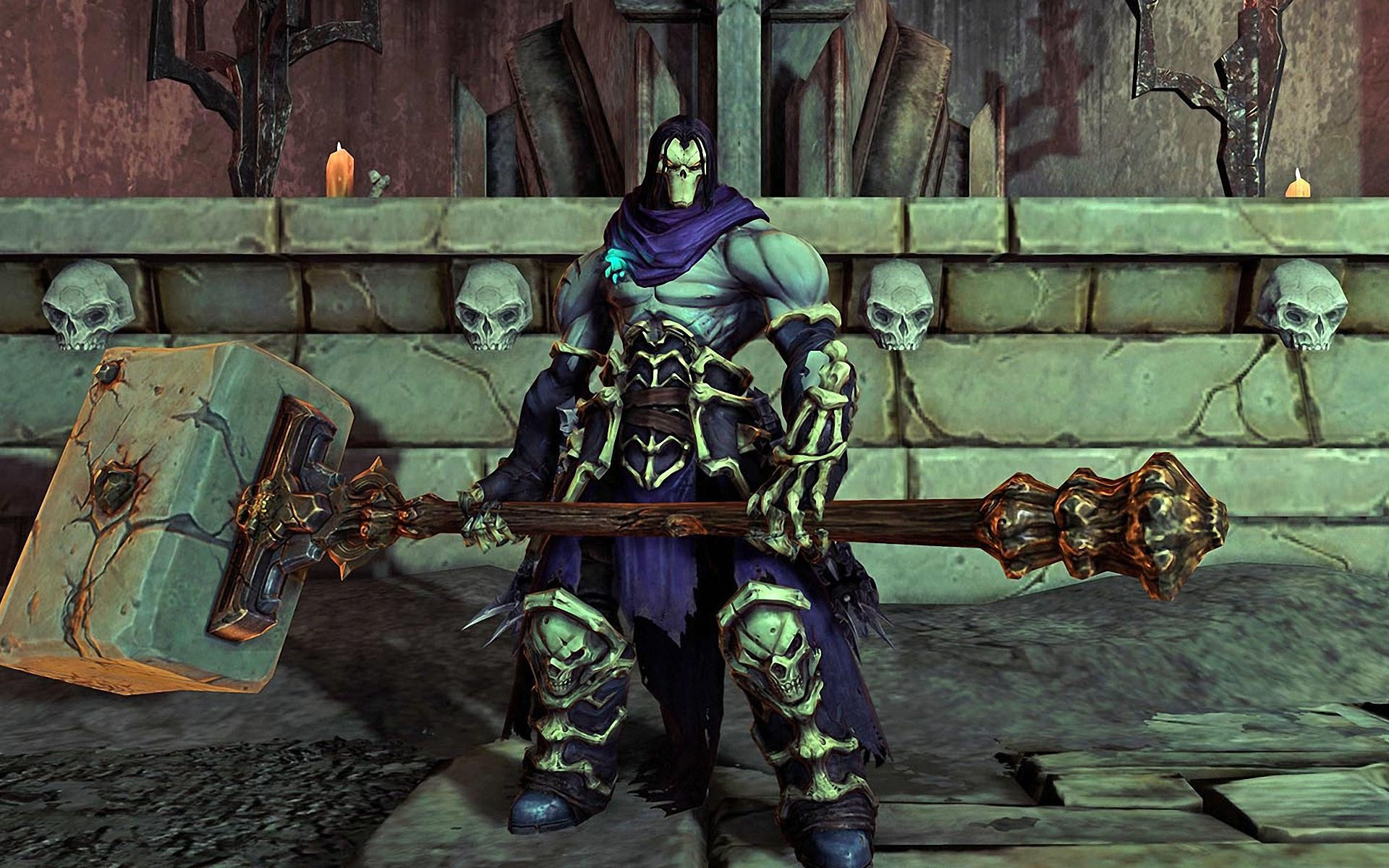 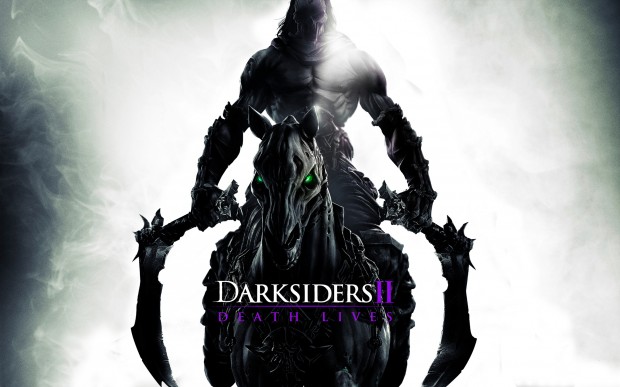 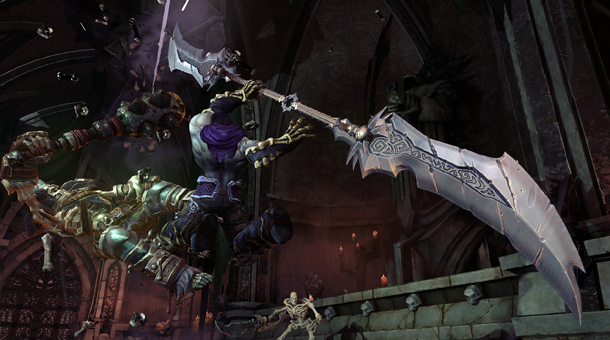 Darksiders II picks up during the 100 year imprisonment, by the Charred Council, that War is serving for his part during the End War that occurred in Darksiders.  This time around, you will play as War’s brother, Death.  Death is convinced that War was tricked into his role and is innocent of the charges brought against him.  Death then seeks out Crowfather to persuade him to give up his secrets on the End War.  The Crowfather refuses, leading to a battle with Death, that ends with Death being sent to hunt for the Tree of Life.  Death believes that the Tree of Life can restore humanity to existence, thus helping to clear War’s name and have him released from his imprisonment.  He appears in the Nether Realm to find the Tree of Life, only to discover that the world that the Tree inhabits is being killed by Corruption.  Death now has to defeat Corruption, in order to save both the Tree of Life and any chance that he has to restore humanity and War. 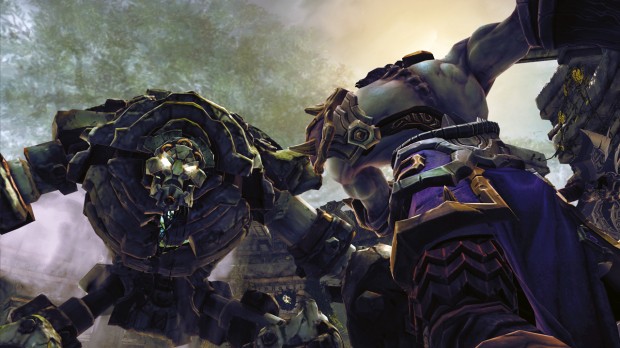 I felt that the story for Darksiders II worked well for the game and did a great job in giving the player a sense of purpose and intrigue overall.  I loved how Vigil Games tapped Death to become the protagonist in the sequel, seeing as how War is serving a jail sentence, though Death seems like the least likely horseman to care about the eradication of humanity.  My only complaint with the story of Darksiders II would be the pacing of it.  You get a lot of story in the beginning, giving you a nice background to what is going on in case you did not play through Darksiders, but the actual plot doesn’t pick up again until you have almost freed the Tree of Life from Corruption.

Everything in between those two events, is you helping out the denizens of the Nether Realm in their quests just to reach the Tree of Life.  The main story just feels like it gets put on hold for a few hours while you do these other quests for the Makers.  Giving the player smaller hints to the plot and circumstance behind War’s imprisonment during these quests would have made the player feel like they were making more progress to their overall goal, then just completing quests for others just to reach a waypoint.  Even with this minor complaint, I felt that the story for Darksiders II works and is quite interesting and really worked for me as a whole. 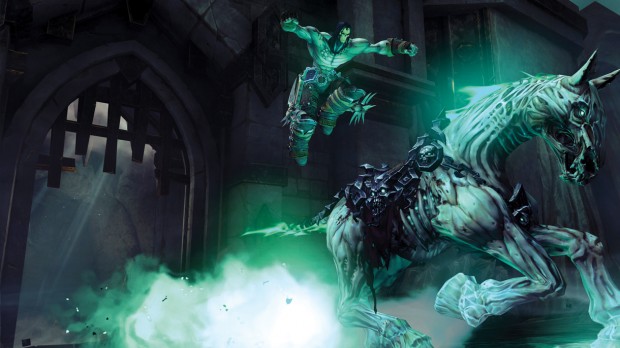 If there is a negative to Darksiders II, it is in the area of game play.  Even then, the only negative that I can mention is that the game play for Darksiders II feels like it was taken from other games of the genre and does not bring anything new or unique to the game.  The combat system feels just like the system from God of War, you are given two weapons that you can use during combat with a set of moves that you can perform depending on the different button sequences you press.  Foes come at you in groups, or in singles if you are fighting more powerful enemies.  The boss battles in Darksiders II are suitably epic and large in scale.  During combat you can dodge attacks and use other abilities that you have gained through the leveling system in Darksiders II.

Darksiders II does play like an action RPG, in which you gain levels and abilities while finding new weapons and armor along the way that change your base stats.  As you level up, you get to pick one tree that you can put points into in order to received those abilities.  The two trees are split into a direct combat tree and a minion summoning tree.  Abilities that you gain will appear on your ability wheel, which felt difficult at times to access.  When I was fighting a huge mob, hitting the ability wheel felt hard to do.  I was playing the game with the default keyboard and mouse controls, so if you have a game pad on your PC, you will not face this at all.  The items that you find along the way will fit into certain item slots and can be of varying degrees of power.  When you run over the item in question, all the stats are flashed up on your screen, with arrows showing you whether or not the item is an upgrade for you.  You can also find possessed items, that can be upgraded by sacrificing other items in your inventory.  While, again, this isn’t a unique game play mechanic by any means, Darksiders II makes it work well and the mechanic fits in with everything else. 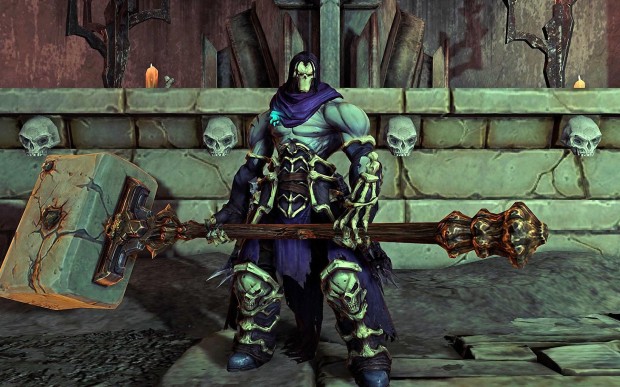 The world of Darksiders II is very large and just screams out to be explored.  The world also feels epic in stature, with large monuments dotting the landscape and huge fortresses that just look fantastic as you ride up to them.  However, while the world feels large and epic, it is barren.  There isn’t a lot of creatures filling up this vast world, so you never get the feeling that the world is quite lived in.  This could have been a design decision, because the Nether Realm is dying, but for me I was hoping for more life to interact with during my trips around the landscape.  I just felt that there was way too much open space. 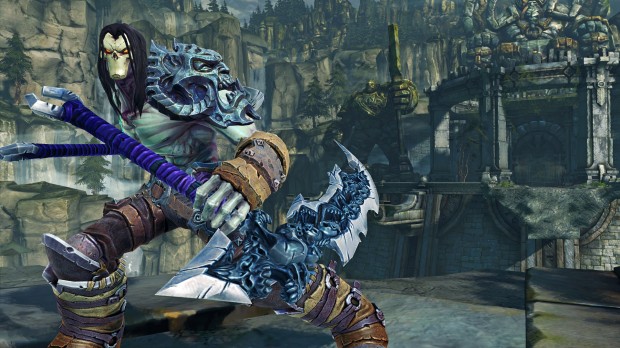 The dungeons in Darksiders II have that large feel to them and scream out to be explored also, but these dungeons are suitable inhabited by enemies.  The game play mechanics for the dungeons have been taken right out of any of the Legend of Zelda games, right down to finding the dungeon map in a chest as you progress towards your goal.  While this isn’t necessarily a negative, because of how well it is done in Darksiders II, it just does not give you a feeling of something new to play with.

Overall, the game play mechanics of Darksiders II are solid and fun, even if we have played them time and time again.  I ran into no bugs or graphical errors through my play through, which is fantastic for a PC release these days.  Combat worked very well, even on a keyboard/mouse set up and will work even better if you have a game pad.  I liked the leveling up system and the choices that you get to make along the way, because the abilities are so vastly different you could play this game a couple of times with completely new talents.  Darksiders II is proof positive that, if a mechanic isn’t broke, don’t fix it. 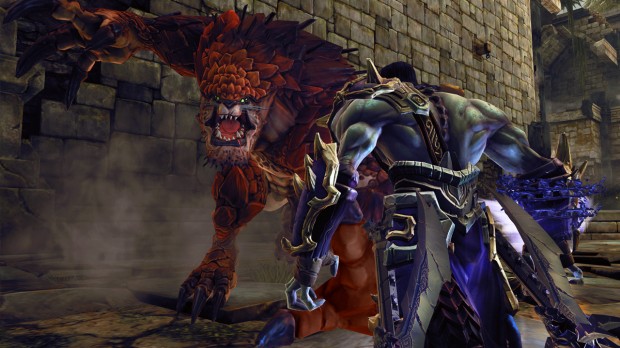 The world of Darksiders II is well designed and looks great.  I loved the design of the characters and environment that Death encounters on his journey, especially the large and epic monuments that you see as you ride through the Nether Realm.  The actual graphics of Darksiders II are good, not great.  This game will not push your machine graphically speaking and won’t make you call over anyone to check out the stunning visuals.  Dungeons are interesting to look at too, though have a very similar feel to each other.  The design of Darksiders II gives you the feeling of being transported to a different world that is large in scale and fantastic in nature, without being too taxing on most machines on the market.

The voice overs are decent for Darksiders II, but not great.  The Crowfather feels over the top, but it works for that character.  The issue I had with the voice overs was the accents given to the Makers.  So, this group of forgers that helped build the universe as we know it are Scottish?  I understand that the designers needed an accent that would work, but why is everyone utilizing the Scottish accent?  We have a world of almost 7 billion people, we can use another accent, we really can.  At least the Scottish accent in Darksiders II is actually well done, and not the horrible parody that I have heard in other games. 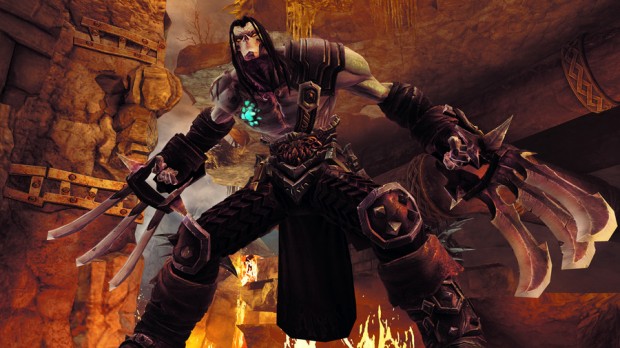 Darksiders II is a great game that utilizes tried and true game play methods, while bringing an intriguing story line with good characterization.  While Darksiders II does not do anything new or exciting, it does what it does well.  Combat occurs naturally and flows nicely, without any significant frame rate issues, even with the bigger fights.  The world is vast and interesting to look at, though it is sparsely populated.  The story is well written and decently acted out while the graphics and aesthetics brings another world to your desktop that is good to look at without being too taxing 0n your system.  Darksiders II is a great sequel to a solid game and is well worth the look to anyone looking for a solid action RPG game for the PC, even if you never played the first game.  Darksiders II is available now for the PC, Xbox 360 and Playstation 3.