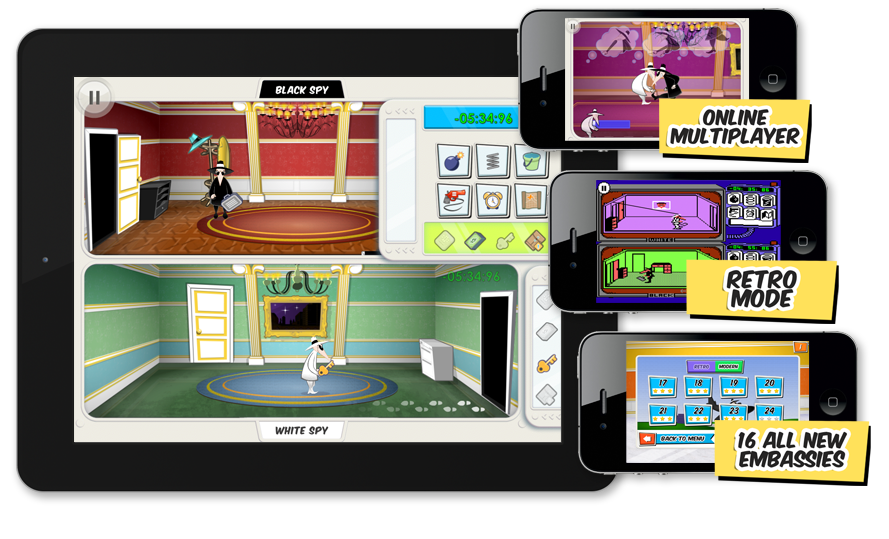 Robots and Pencils, together with First Star Software, Inc. and Warner Bros. announced today that the landmark hit “Spy vs Spy” hit #1 as the Top Paid iPhone/iPod touch App on Apple’s App Store during its inaugural weekend after its release on July 26, 2012.

“Spy vs Spy”, found here, is now available for iPhone, iPod touch and iPad as a universal app, featuring the famous Black and White Spies from DC Entertainment’s MAD Magazine with online and local multiplayer matches, 16 new embassies (plus the original 8), and a pixel-perfect retro mode, as well as a modern mode. During a special launch promotion, for a limited time, “Spy vs Spy” is just 99 cents on the iTunes App Store, before it goes back to its regular price of USD $1.99.

Based on the original “Spy vs Spy” game, the iOS title brings back all the humor, action and fisticuffs that made the original an all-time, multi-million-unit-selling hit. This modern update takes the original gameplay as designed, developed, and published by First Star Software in 1984 for the Apple II, Atari 400/800 and Commodore 64, and adds HD visuals; support of Wi-Fi, Bluetooth and Apple’s GameCenter as well as four remixes of the original music and many other new features.