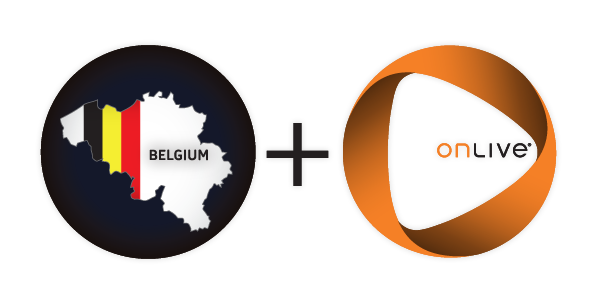 Today Belgacom and OnLive launch the revolutionary OnLive cloud gaming service in Belgium, the second country in Europe in which the OnLive Game Service is available. Belgacom is the first telecom operator in Belgium to offer cloud-based gaming to its customers through its exclusive partnership with OnLive, the world’s first on-demand instant-play video game service. The OnLive Game Service delivers hundreds of top-tier video games instantly over the Internet, letting customers play whenever and wherever they like, without the need for specialized computers, expensive game consoles or large downloads. Belgacom is offering its Internet customers a free one-month subscription to the OnLive PlayPack, which includes unlimited access to a selection of more than 200 video games (www.belgacom.be/onlive).

The OnLive Game Service is a groundbreaking on-demand video gaming platform that delivers the latest and most advanced games instantly over an Internet connection. Users can play everything from indie puzzle games to multiplayer classics to  blockbusters such as Saints Row: The Third, Pro Evolution Soccer 2012, Sid Meier’s Civilization V, Batman: Arkham City, Assassins Creed Revelations, London 2012 and soon Darksiders II on virtually any PC or Mac. Gameplay on tablets, phones and TVs is live in the UK and North America and will be coming to Belgium soon.

OnLive has created an entirely new way to play, watch, share and try premium games. Users can subscribe to the OnLive PlayPack to play an expanding selection of games as much as they like, or purchase Three-Day, Five-Day or Full PlayPasses for any game in the ever-growing OnLive library. Free 30-minute trials enable gamers to test-drive full-featured games before buying. OnLive’s cloud-based platform also enables unique social features. Users can watch and voice chat with gamers across the world in the massive OnLive spectating Arena, and soon will be able to  spectate three other game sessions while playing their own game with  OnLive MultiView in-game live spectating. Brag Clip videos enable players to record their best gameplay moments and share them instantly with friends on the service. Players can also use Facebook notifications to post their videos on their Facebook Wall, announce in-game achievements and let friends know what they are playing through simple links that instantly launch the game.

Starting today Belgacom’s Internet customers can discover OnLive’s instant-play game service. Belgacom offers an exclusive one month free PlayPack subscription (normally € 9.99/month) with unlimited access to more than 200 games from more than 60 major publishers, with more games added weekly. The special PlayPack subscription offer is available through 30 September 2012 to any Belgacom Internet customer, 18 years of age or over, who registers online at www.belgacom.be/onlive.[i]

The OnLive PlayPack features a wide range of games, including action, adventure, first person shooter, sports and puzzle games, with something for gamers of all ages, skill levels and interests. Examples include Batman: Arkham Asylum, Homefront (Large-Scale Warfare Multiplayer), F.E.A.R. 3 (multiplayer), Borderlands, Just Cause 2, Red Faction: Armageddon, Sid Meier’s Civilization V, LEGO Batman, World of Goo, Flatout 2, Puzzle Quest: Challenge of the Warlords, Prince of Persia and many more. The games are in English but will soon be available in Dutch and French.