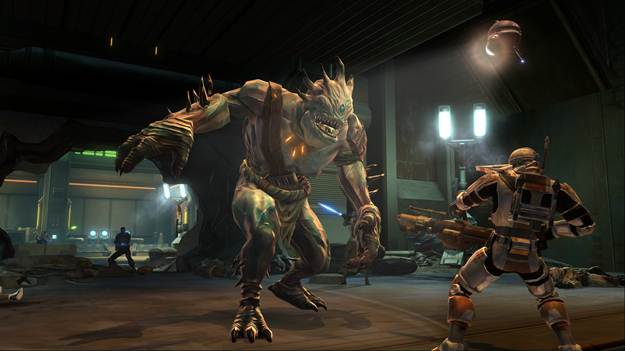 BioWare Unveils Rise of the Rakghouls for The Old Republic

BioWare, LucasArts, and Electronic Arts have revealed the contents of Game Update 1.1 for Star Wars: The Old Republic. Rise of the Rakghouls will feature a new flashpoint as well as a continuation of one of the game’s “operation” missions. Check out the press release below for the full scoop:

Just one month after launching the fastest growing subscription MMO in history, EA, BioWare and LucasArts are prepared to release the first game update for the critically-acclaimed Star Wars™: The Old Republic™. . Launching next week on Tuesday, January 17, Rise of the Rakghouls will introduce new, higher level group content, game feature additions and continued balancing and bug fixes. As part of the commitment to the community, BioWare will continue to release game updates to subscribers throughout the year on a regular cadence. The next update is planned for March 2012 and will include new Flashpoints, Operations, WarZones and new game systems.

“A month ago when we launched the Early Game Access program for Star Wars: The Old Republic, we promised our fans that this would just be the beginning of our journey together,” said Dr. Greg Zeschuk, General Manager of the BioWare Label’s MMO Business Unit and Co-Founder of BioWare. “Rise of the Rakghouls adds a lot of the things our community has been asking for – additional higher level group content, features like anti-aliasing, PvP bracketing and more. In the future, game updates will be even more substantial, as we promise to continue to not only add to The Old Republic, but to also improve and refine the experience with the full Legacy System and new Guild features.”

Rise of the Rakghouls features a new Flashpoint and a new Operation as well as a number of changes made throughout the entire game, including level 50 bracketing for PvP WarZones, the addition of anti-aliasing and changes to Open World PvP on Ilum.

For more information on Game Update 1.1: Rise of the Rakghouls, please visit www.StarWarsTheOldRepublic.com for the full details.