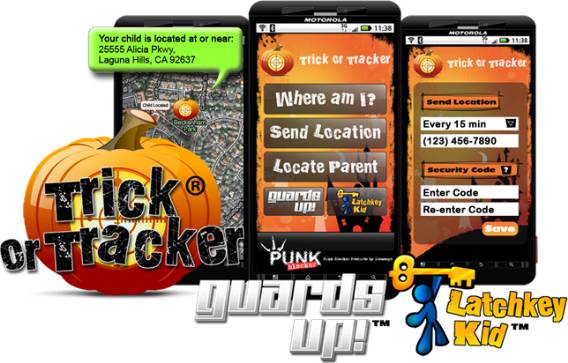 Trick or Tracker 2.0 has officially been released to the Android Market. The app allows parents to track their children’s Trick or Treating progress as well as send location updates automatically at predetermined time intervals. The app retails for $4.99 but on Halloween Day, it will be available from www.trickortracker.com for free from 8am EST until 11:59pm EST.

•    With the app, parents can locate their trick-or-treater with the touch of a single button on their  Smartphone for ultimate convenience.

•    The App installs easily on both the parent’s phone and the child’s own phone (note — if the child is too young to use a Smartphone, Iconosys believes that they are probably too young to trick-or-treat without being accompanied by a parent or guardian in any event).

•    The child’s phone has special “Where Am I?”, “Send Location”, and “Where’s My Parent?” buttons, and the parent’s phone has a corresponding “Where’s My Child?” button.

•    Trick or Tracker® can also be programmed to automatically send out updates of physical locations, in pre-set intervals, from the child’s phone to the parent’s phone. Additionally, the parent can set up their own “Geo-Fence” and “Location Triggers” to notify the parent if their child is traveling outside an allowable area, or has reached a pre-set destination, such as “home from school.”

•    Only the child’s phone must be an Android OS phone.  For the parent, any Google maps-loaded phone (including iPhone, Blackberry, or Windows Phone 7) will work using a simple manual process. However, for best results we recommend that both the parent and the child user should be on Android OS phones.

•    The app also has a very handy flashlight feature that illuminates the phone screen, casting a ray of light on a child’s path and allowing them to travel more safely in the dark or into their treat bag as they sneak a quick treat along their journey. This flashlight feature is available in white, as well as in several glow-stick colors and patterns (orange, pink, blue, red, and green).