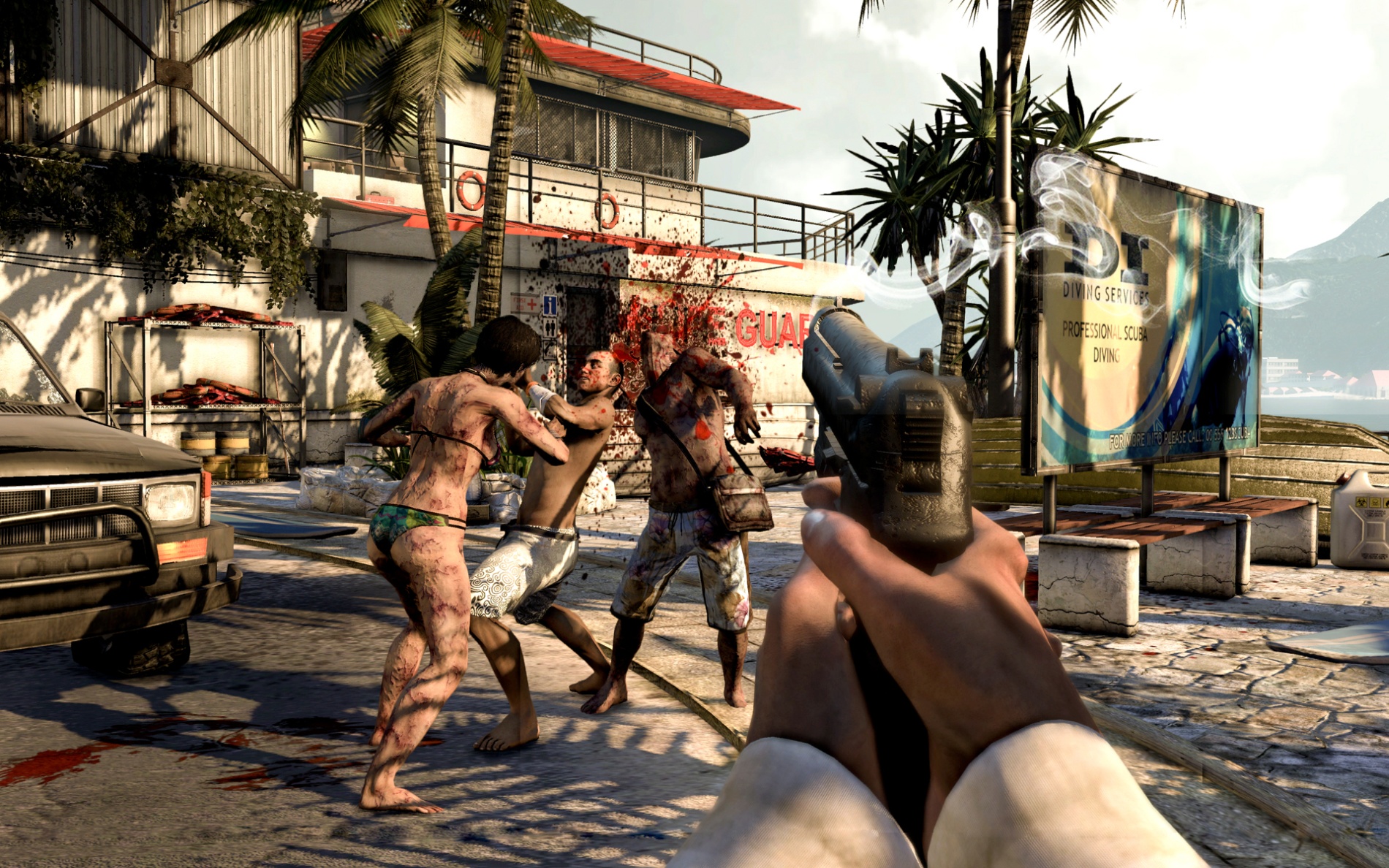 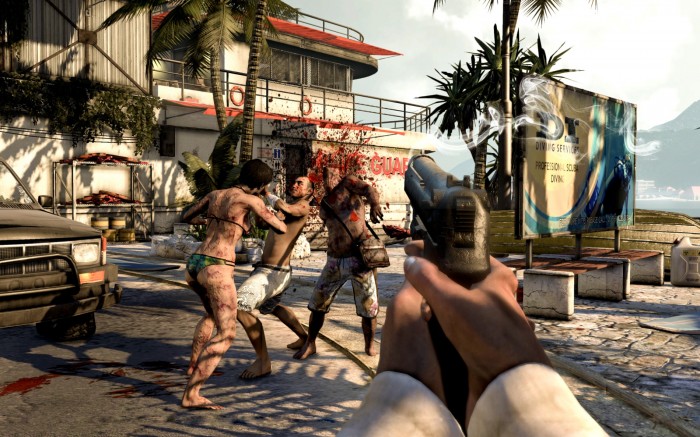 We just survived our early press copy of Deep Silver and Techland’s new zombie action-RPG, Dead Island, and are still recovering. This is truly the zombie game genre-fans have been waiting for. On this, the launch date of the game, we have assembled our official review for those of you still on the fence about buying this excellent and breath-taking title. After selecting your character (more on them later), you find yourself in a hotel room after a long night of drinking. Upon exiting your domicile, it is quite clear things have gone to hell and you soon find yourself in the midst of a full-on zombie outbreak.

…after seeing these situations played out on video, actually playing them out is a whole different bunch of undead celery stalks

The overall plot and story of Dead Island are all things that fans of zombie films have seen before. In fact, several quest-lines feel like they have been lifted straight from the unofficial zombie film guidebook. However, this is no detraction from the experience as, after seeing these situations played out on video, actually playing them out is a whole different bunch of undead celery stalks (Howe fans, anyone?). The quest lines range from slightly comical to deadly serious and dramatic. One early quest line deals with a wounded and immobile husband asking you to take his wife to safety. Upon getting her to safety, she asks you to go back and check on him. Of course, by time you return, he has succumbed to his injuries and attempts to eat your face off. The human drama is in full force on the tropical “paradise” of Banoi, with people searching for loved ones, looting abandoned homes, and more.

…if you have not guessed by the talk of levels and abilities, Dead Island is an RPG.

The game is divided up into several areas, each with a huge number of side quests and explorable areas. In fact, it is very similar to Deus Ex: Human Revolution in this respect, but Dead Island is a far more open-world than Eidos Montreal’s latest offering. The areas are fully-explorable no matter what level you are (although some quests are not present until others have been completed), and you are free to go back to previous areas and explore at any time. Each of the four characters of Dead Island have their own set of skill trees and qualifications. Although all characters can wield every type of weapon (bladed, blunt, projectile, etc), certain characters are far more versed in these types than others and their skills represent this. Speaking of experience and character development, if you have not guessed by the talk of levels and abilities, Dead Island is an RPG. You, as a character, increase in level as you gain experience by completing quests and killing undead monsters. With each level increase, you can unlock a new skill or upgrade an already-selected one.

If Techland had gone with a photo-realistic approach in mind, this game would be a bit too much in the gore department.

Visually, the zombies of and characters of Dead Island are beautifully-detailed and rendered. Both living and dead alike have a slightly stylized nature about them so that they don’t hit the “uncanny valley” and also to not make the gore too overpowering and realistic. The zombies are grotesque masterpieces in their own right, each with their own array of wounds and giblets. If Techland had gone with a photo-realistic approach in mind, this game would be a bit too much in the gore department – seriously. There is so much blood and giblet-flying in this game it is crazy. Of course, this is also tempered with the game’s damage modeling system, which lends damage to character models based on weapon type, condition, and location. Hit a walking corpse in the arm with a scythe and you might take it clean off. However, you hit the same are with a baseball bat and you may break it. Each of these actions causes the zombie to perform accordingly. Vehicular locomotion is also a blast as you fly down the motorways, plowing into the undead. There are several vehicles available for piloting and all make for a very interesting experience – both in terms of your tactics as well as survivability.

…if I wanted to join them, all I had to do was press a button

The cooperative component of Dead Island is pure brilliance. As I was walking stealthily through the impoverished city of the game’s second act, a notification popped up stating that another player was in the same area as I was in his or her game and, if I wanted to join them, all I had to do was press a button. I did and, before I knew it, we were sharing a game world and taking on the undead. This nearly-seamless system is tribute to Techland’s developmental prowess. I was never able to get all four characters together as the number of people playing the press copy was limited compared to the number sure to be playing it now – but, if you can get all four characters in one game at the same time, I think you will have one of the best coop experiences ever designed in a video game. You owe it to yourself and your friends to check this out.

Overall, Dead Island, is the action-RPG zombie fans have been waiting for as well as one of the best games of 2011. Deep Silver and Techland have outdone themselves in every way with this AAA title.

Dead Island is simply incredible… I can’t wait to see what Deep Silver and Techland do next – Dead Nation? Dead County? Dead World? The possibilities are limitless. 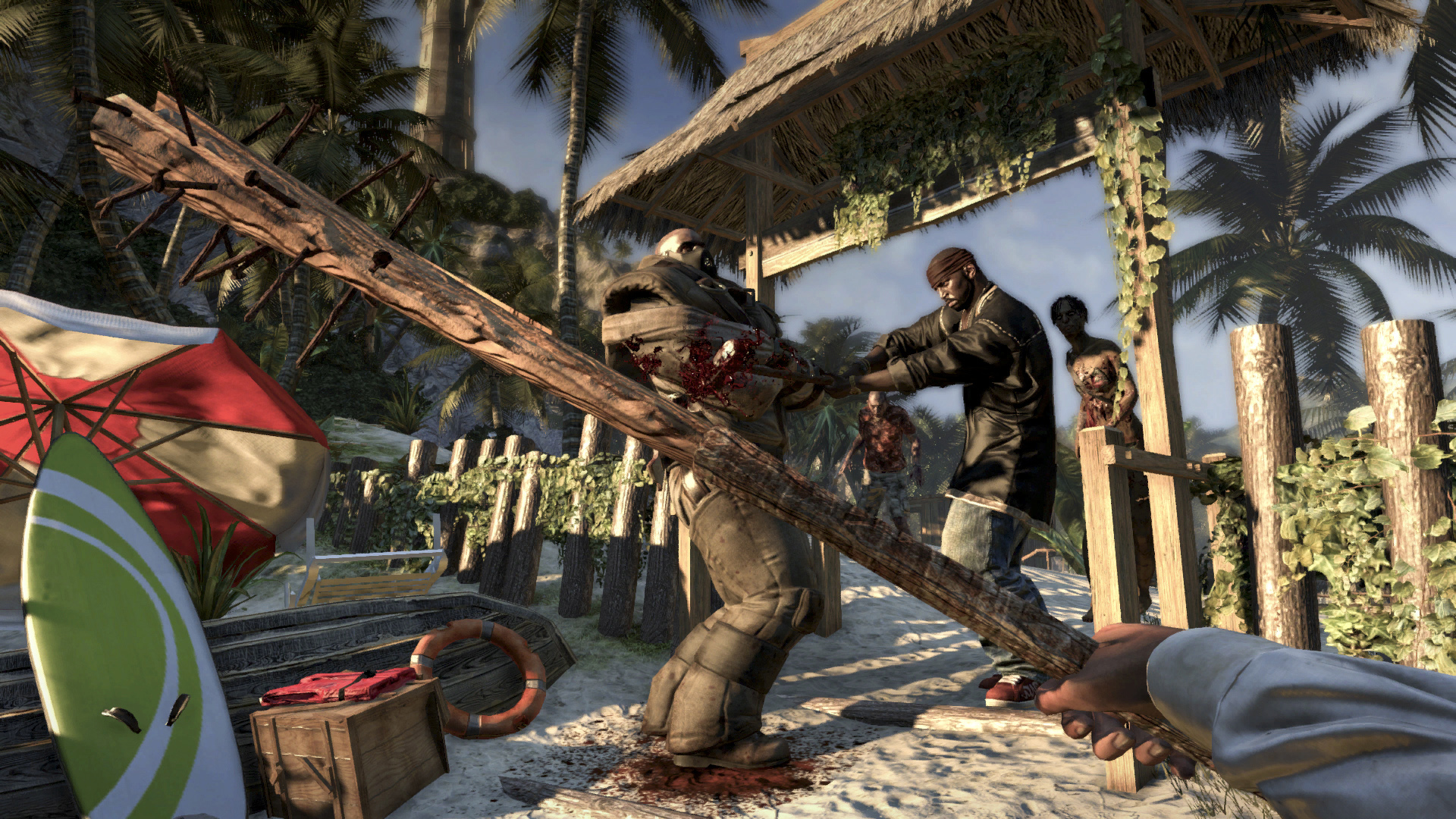 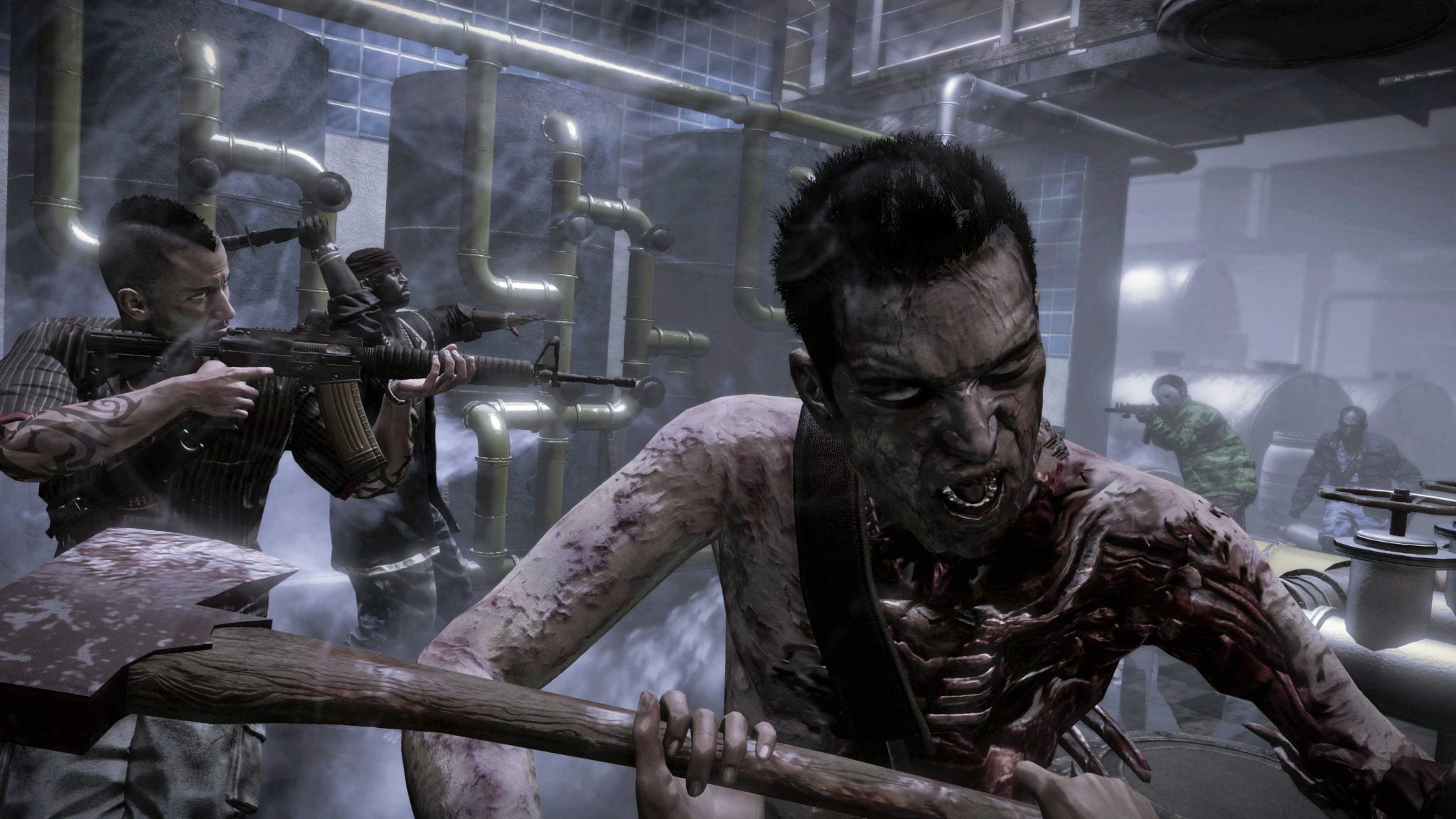 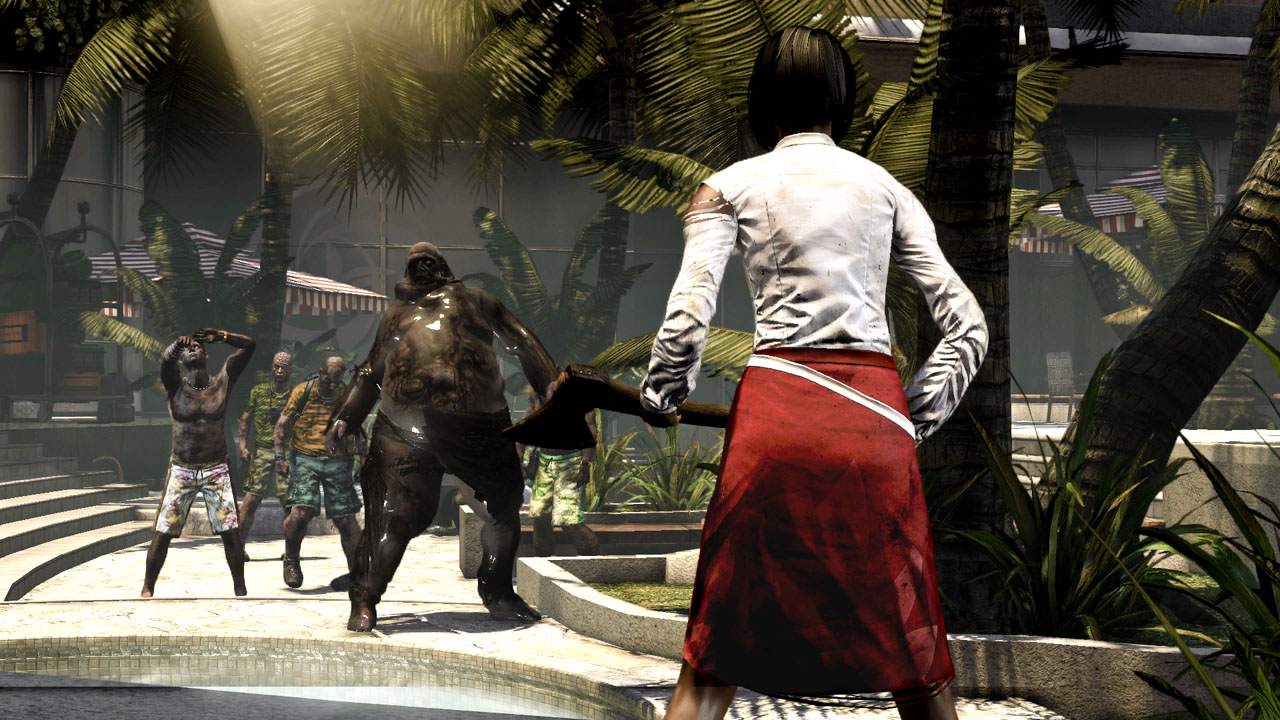 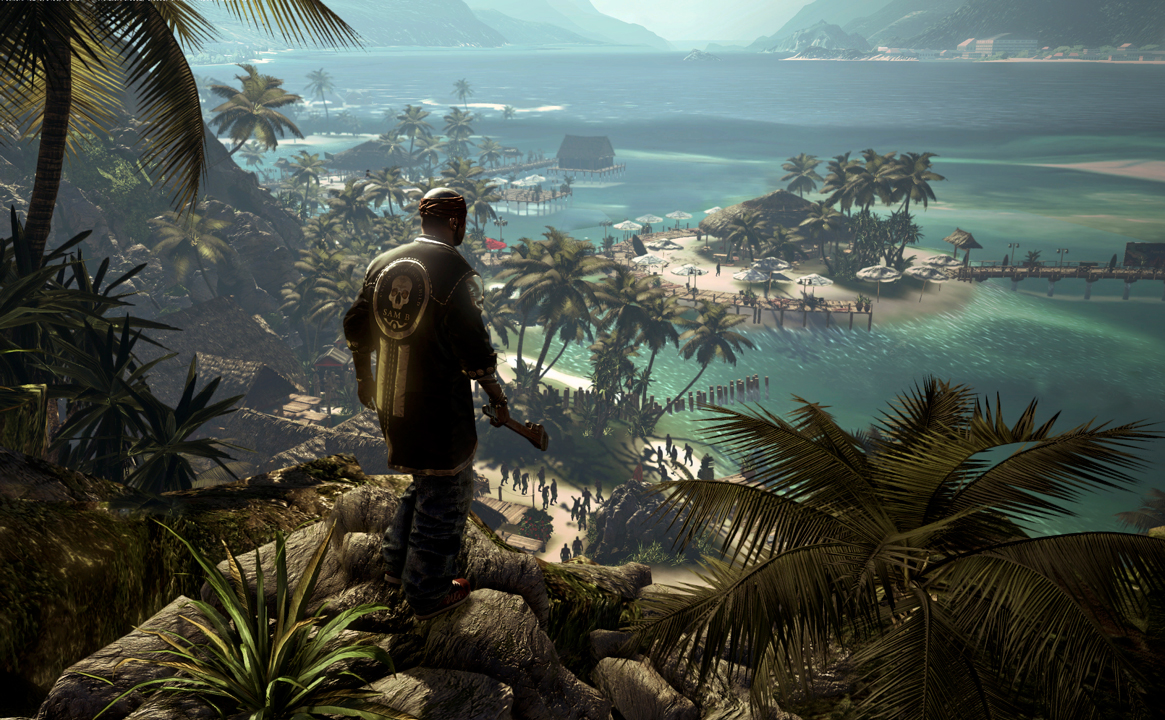