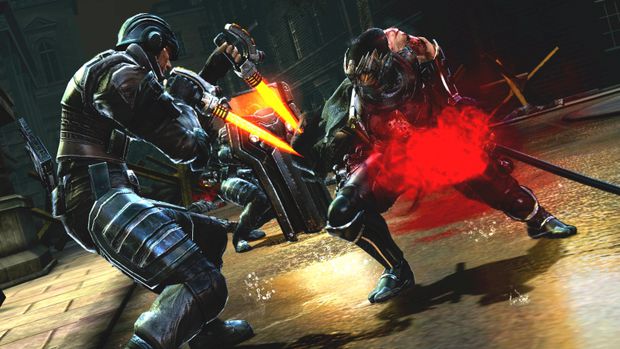 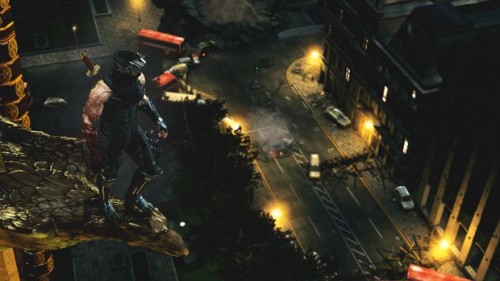 I was greeted quickly at the check in and Team Ninja had me back in a discreetly tucked away booth by myself in seconds, seated before a PS 3 and Xbox 360 both ready to let me start running Hayabusa through his ninja paces. So I settled in with a grin on my face and started doing just that. Near the end a member of Tecmo Koei America made his way in and after I was done he showed how you did it after a whole lot of playthroughs. Even from the demo I could tell this game has chops.

The game has a distinctly darker look than games in the past, with Ryu doing a very Ghost In The Shell dive from great heights into the fray. Everything looks gritty, dirty and war torn. This mood isn’t changed as you tear through enemy after enemy, listening to their incredulous cries and curses and death throes. While keeping Ryu’s signature moves it is obvious that the game designers were going for a more realistic damage system, less gore more war horror. Sure there are sprays of blood and you can spin up in the air slashing your enemy up then dumping them on their heads (I still get a great thrill out of this) but when you stab an enemy once they start staggering around cursing, dying slowly or giving one last attempt at stopping your grisly progress. The demo is set as a tutorial though so they never seem to quite succeed and you are free to move onto the next enemy and learn a new combo or new move for the game. It is nice to have the lessons available since there is no manual in front of you and to truly understand the scope of Ryu’s abilities you really need to be able to put him through his different skills and get the hang of them. To hardcore gamers who were trying this demo this might have actually seemed like a down point or even a complete weakness in the game but the developers were trying to allow access and understanding of the game to a wide variety of reviewers and so to me at least it made sense to show the damage system, show the skill system and show the graphics. 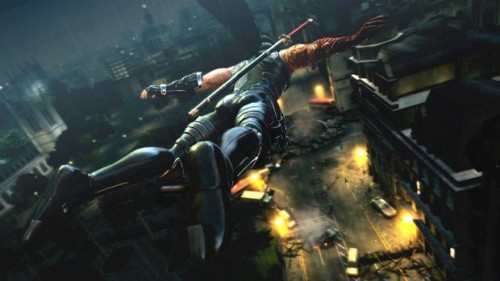 The graphics were excellent, already to the point beyond tearing or pixel issues and the loading screens were cleverly disguised by game features so it never seemed like a pause in the action. Also his new soul sucking arm is well rendered and as the soul meter rises Ryu is able to unleash a wicked combo attack, which for the time it lasts is actually out of your control, turning into a cinematic slaughtering. I would have liked to be able to control this part more than grouping up enemies to watch what combination of unearthly destruction he will wreck upon their bodies and sometimes I found myself passing on the special attack in favor of a speedier, self-controlled tear through the enemies. I enjoyed watching the disturbingly beautiful ways that Ryu could mince his foes with his new arm but I am expecting the new arm to play more of a story role somewhere down the line so I felt fairly comfortable leaving the killing to my own play. Besides as I said before, I love dumping them on their heads, even with the increased realism.

Another nice way the graphics worked with the play was in the special non-combat moves Ryu makes. He scales walls using daggers dug into the bricks, the sails down from great heights to bring death from above, he glides across puddles on the ground to slide under obstacles. It is all great and gritty eye candy that I look forward to so much more of. 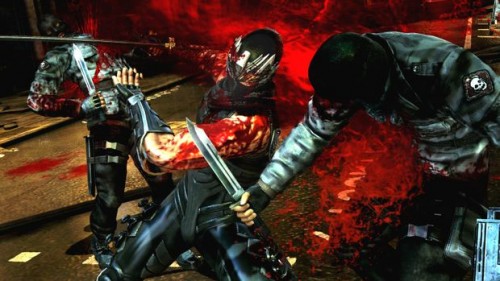 When I was working on the final boss, Sean Corcoran from Tecmo Koei America came in and gave me a couple of pointers before, with a smile, I handed him the controls and asked him to show me how it was done. He showed me how to streamline combat and tear through the demo like it was tissue paper rather than the long worked on and developed demo it is (he had run through it over 80 times). He probably could have gone even faster but my laughter at Ryu’s special attack was contagious and soon we were laughing together and having a blast ignoring the “E3 is now closed for the day” announcement in favor of what video games are really all about when it comes right down to it: having fun. I can talk about graphics or Ryu’s growing angst throughout the series or the consequences of his new arm but what it all really comes down to is whether or not the game is going to be fun. I can honestly say that it was a blast to play but even more fun to watch as Sean had fun with it, even after so many plays, he was enjoying it as much as I was. I think that is a testament to what is in store as much as anything.