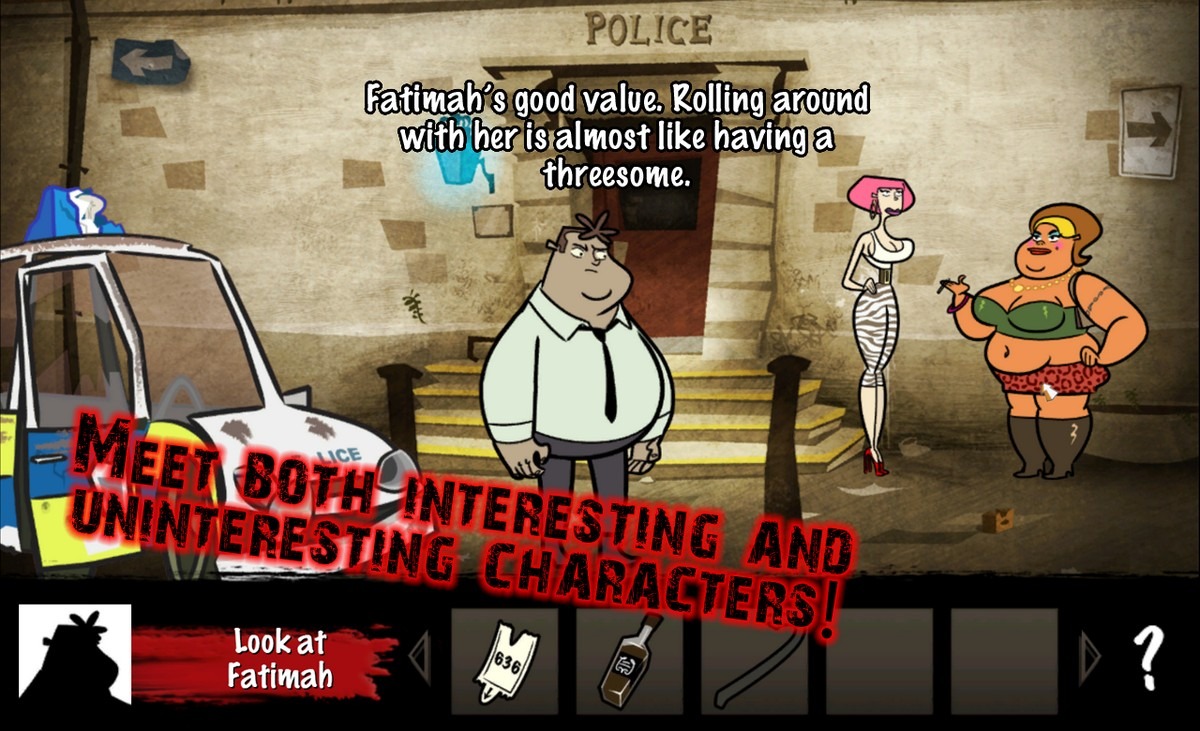 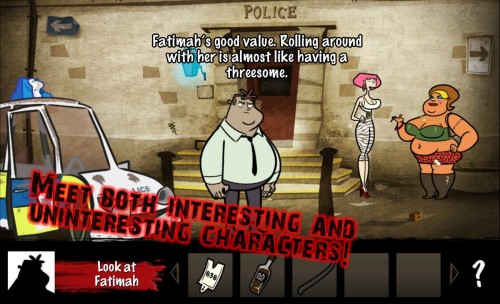 Telltale Games has finally released their newest point and click adventure game for the PC, entitled Hector: Badge of Carnage.  In a similar fashion to the last set of Sam and Max games, Hector: Badge of Carnage will be released episodically, starting with We Negotiate With Terrorists. This episode had previously seen release strictly on the iPhone so, technically, this is a port.  Regardless, I was very excited to get my hands on this game, since I am a big fan of what Telltale Games released with The Devil’s Playhouse.

In Hector: Badge of Carnage Episode 1, you play as Detective Inspector Hector of the Clappers Wreake Police Force in Britain.  Hector is a fat, foul-mouth, drunk of a police officer who does things his way – including using one of the department’s cells as a place to crash after a night of debauchery.

The story of We Negotiate with Terrorists begins with a hostage situation in Clappers Wreake.  A crazed gunman has taken hostages and has barred himself inside a building.  The Clappers Wreake Tactical Weapons and Tactics group, or TWAT for short, is on the scene to help calm the gunman.  However, the police department starts to loose negotiators fast, as the gunman kills each and every one that TWAT sends out.  Hector is then called in, not because he is the best, but mostly because it seems like a good time to be rid of him off of the police force.

The writing in Hector: Badge of Carnage is on par with other Telltale Game that I have played lately.  The dialogue is snappy and funny, but in a different way then the Sam and Max writing was.  Hector is British, thus he uses many British terms and slang words that some Americans may not know.  This also leads to the humor being a little subtler then the Sam and Max series.  Hector does not have a wacky sidekick to play off of, so he uses the interesting inhabitants of Clappers Wreake for the punch lines to many of the game’s gags.

My only complaint with Hector: Badge of Carnage is that episode 1 is very, very short.  Barring any issues with puzzles, you are only looking at about a couple hours of game play.  Episode 1 also ends with a dramatic cliffhanger, and episode 2 is set to be released sometime this fall, so you have a good wait to find out how the ending is resolved.  Other then those two issues, Hector: Badge of Carnage is a top-notch point and click adventure game that will make you chuckle.

Hector: Badge of Carnage is a point and click adventure game, along the same lines as Sam and Max.  You use either the keyboard or the mouse to move Hector through each locale, looking for clues on how to solve puzzles and problems that Hector faces.  For example, Hector starts the game off with no trousers, and refuses to go outside without a pair.  The player must find a way to get Hector dressed before continuing with the story.

Items can be combined with other items to make them useful for solving puzzles.  One of the early puzzles has you combined an empty whiskey bottle and coffee in order to carry the coffee to the local drunk next to the police department. Not all items that you can find in Hector: Badge of Courage has a use, so this has the potential to through off newcomers to point and click adventure games.

The graphics of Hector: Badge of Carnage are done in a very stylized manner.  Completely two dimensional, Hector looks more like a better-drawn episode of South Park then, say, characters in the recent Sam and Max series.  While this can be seen as a step backward in today’s graphics-intensive video game market, Hector’s visual style works beautifully with the overall tone of the game.

The sound and voice acting, once again, are top notch from Telltale Games – each character has a distinct personality that can be immediately heard through their performances.  From the stoic police chief to the obnoxious street thug, each character has a voice that directly matches their personality.  In a similar tone to the graphics, the sound for Hector: Badge of Carnage isn’t anything technically superior, but works perfectly with the style of the game that Hector is.  Hector is a great example that good writing and voice acting can supercede three dimensional graphics and surround sound any day.

While not as entertaining as the last season of Sam and Max, Hector: Badge of Carnage will keep you entertained for the couple of hours that it lasts.  Speaking of time, the game did not last as long as I would have liked, but the good news is that there are more episodes in the pipeline set for later this fall.  If point and click adventure games are your thing, then I strongly recommend Hector: Badge of Carnage Episode 1.  You will have to judge for yourself if the price tag is worth the couple of hours of game time you will get.