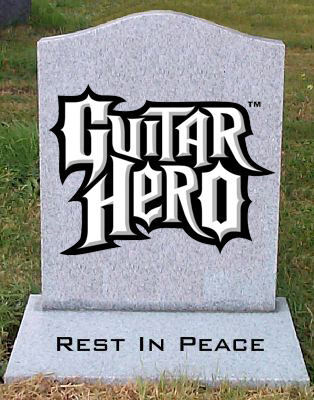 This just in, it appears as though Activision has effectively killed the Guitar Hero franchise due to ‘declines in the music genre’ as well as the True Crime franchise. This includes the two currently in-development titles for each series. No word yet on exactly when the Guitar Hero team will be ‘disbanded’. The company announced that it would be refocusing its efforts into the Call of Duty franchise as well as the titles of Blizzard Entertainment. The company is also looking-forward to an unannounced title from Bungie as well as some brand-new IP, which will be debuted at Toy Fair later this week.

From today’s 4th Quarter Earnings call:
‘At the same time, due to continued declines in the music genre, the company will disband Activision Publishing’s Guitar Hero business unit and discontinue development on its Guitar Hero game for 2011. The company also will stop development on True Crime: Hong Kong. These decisions are based on the desire to focus on the greatest opportunities that the company currently has to create the world’s best interactive entertainment experiences.’

Our best wishes go out to the Guitar Hero and True Crime teams.