When I think of how Michael Bay and Co. butchered one of my beloved childhood franchises with the two modern-day Transformers films, I just shake my head in frustration. I don’t recall ANY Transformer once urinating fluid on anyone for any reason – not even to put out a fire. But, I digress…

Thankfully, Activision’s new Transformers: War for Cybertron, feel much more like a story inline with the original animated adventures from the 1980’s than the new films, even though it it supposed to be a prequel to those monsters. The story chronicles the epic battle between the Autobots and Decepticons to control their home world of Cybertron. Megatron, leader of the Decepticons, is on a mission to reach gain ‘dark energon’, a corrupt and evil variant of the energon power used by all Cybertronian technology. When interfaced into normal machinery, dark energon will bend the machine to the will of the Decepticons. 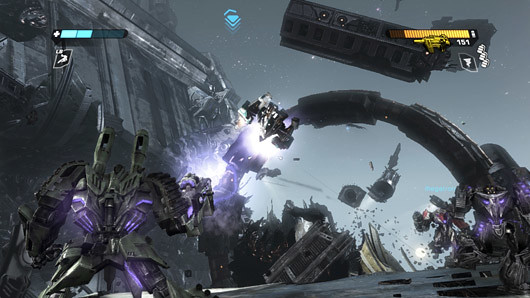 The game is laid out into ten levels, each taking roughly an hour to complete – the first five being the Decepticon campaign set and the last being the Autobot campaign. Each level is made up of several checkpoints and at the start of each level, you can pick between three Transformers which will be featured throughout. Usually, you can choose between a ‘leader’ class, a ‘scout’ class, and a ‘scientist’ or ‘soldier’. Each of these ‘bots has their own strengths and weaknesses, with many having extra abilities on top of built-in weapon systems and Transformer forms. Throughout each level, players can pick up power-ups to heal themselves as well as swap out hand-held weaponry as they come across different ones.

One area of the game’s combat system which felt nowhere near fleshed-out enough was its melee weapons. Each Transformer has a melee attack, but these were apparently not meant by Activision to be primary combat attacks – even though they are some of the most fun in the game to pull off. For instance, when using Optimus Prime’s ‘slide’ ability when charging enemies, it would be great to go off into a flurry of spinning attacks with his twin-bladed energy axe, which crashes through Decepticons with a pleasing ‘schwak!’, often sending Transformer-giblets flying. Unfortunately, you get one attack and then have to recover for a few seconds, which leaves you open to enemy fire. Ranged weapons are definitely more numerous, with sniper rifles, energon pistols, plasma cannons, machine funs, etc. Each has its own pro and con in terms of range, damage, and usage which you will have to pick up along the way. Despite this array of ranged weaponry, much like the melee system the game’s combat is fairly simple and anyone familiar with third-person shooters should be able to pick it up quickly. 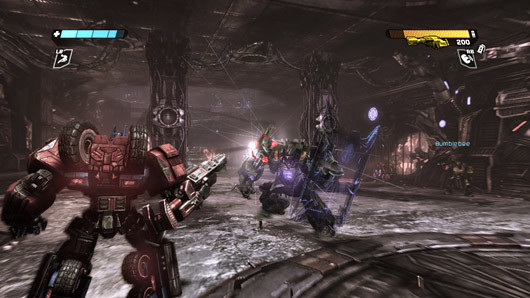 Changing back and forth between humanoid and vehicle forms is accomplished by simple pressing the left analog stick in. Vehicles mainly provide a quicker way to traverse levels and are not always necessary unless the game is requiring you to make a long jump across a broken highway segment or chasm. Players will find they really don’t need to rely on ground-based vehicle modes. However, the jet-forms in Transformers like Starscream, for example, are usually very handy as they provide two different types of weapons to switch between – each with unlimited ammo. There is also something very satisfying about diving towards an enemy at full afterburner and, just before crashing into him, transforming into humanoid mode for an up-close kill.

Visually, the game features a very detailed levels with plenty of greebles to help make the whole world feel mechanical. Transformers look great and are completely recognizable in their Cybertronian forms – although changing some of the ‘bots appearances a bit more could have been fun, it helps players keep that connection with the Transformers. Throughout the game, players encounter boss sequences and larger-than-life set pieces such as Omega Supreme and Zeta Prime’s armature. Aside from these, however, levels are fairly straight-forward. Thankfully, these linear levels are often set within a larger area full of action. During the Battle of Iacon, while the level is very linear, players can see all sorts of battle raging around them in the background. This helps give these levels a bit more life.

Transformers: War for Cybertron has an excellent cast, and well-acted throughout the entire experience. Background Transformers on both sides throw banter back and forth where appropriate and help you feel immersed into this world under siege. Megatron is voiced by long-time video game voice-over veteran, Fred Tatasciore, who puts up a strong performance with his over-the-top evil always seeming slightly under control in a calculated manner. And then there is Peter Cullen, reprising his role of Optimus/Optimus Prime… 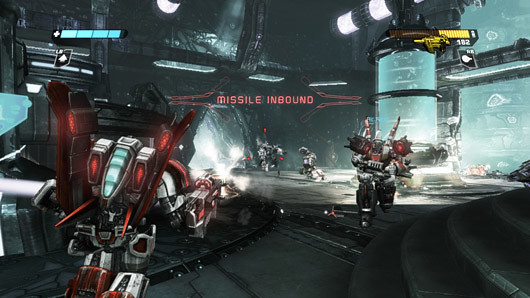 Unlike the films, where Peter Cullen was given over-the-top pompous and self-righteous lines of dialog to spew forth, here, Optimus actually has some character development in his rising up through the Autobot ranks and every so often it would send a chill through this geek’s spine to hear him yell ‘Autobots, roll out!’ right before I hit the ‘transform’ button to those memorable synth-metal noises and stepping on the throttle.

The game features some really solid multiplayer modes as well, with gamers being able to not only play the campaign co-op with a friend via Xbox LIVE, but also to create their own custom Transformer for play in the larger-scale multiplayer battles. Multiplayer battles are fun and offer a quick pick-up-and-play style which most gamers should not have issues with getting a handle on.

Overall, Transformers: War for Cybertron is a fun third-person actioner which will appeal more to fans of the original animated series than those who’s first experience with the franchise was the Bay films – and that is more than fine with this geek. Shogunites, roll out!