Hey there Shogunites! We were lucky to get a sneak preview (with hands on time) of Warner Brothers/Eidos’ Batman: Arkham Asylum at E3 2009. Thankfully, the game lives up to all the hype, and it’s not just another button masher. It’s free-form combat system, combined with mandatory stealth movement, make the game suspenseful, challenging, and dammit… exciting! (cont)
Story-wise, the Joker has taken control of Arkham Asylum in an attempt to lure Batman into a fatal trap.  The Joker’s goons control the whole building and you, as Batman, have to work your way through the Asylum to pacify the facility, and re-capture the Joker.

The freeflow combat system is very well done.  Instead of having to manuever Batman through a myriad of enemies, there are a limited number of attack buttons, and Batman chooses his enemies in a manner which kicks maximum ass.  Lightening bolt-shaped indications above an enemy’s head indicate when Batman should press his counter-attach button.  If your reaction time is good enough, Batman should mow through his enemies like Neo battling his way through a dozen incarnations of Agent Smith.

Batman doesn’t use firearms, of course, so the game is not just button mashing.  In our hands on preview, we had to employ stealth more often than hand-to-hand combat.  In Arkham Asylum, Batman has an ‘investigative’ mode where his cowl switches to a view which is part x-ray, part night vision.  The game highlights objects Batman can interact with, and using this information, the player can stalk the night, taking enemies out one by one.

In our hands on preview, for example, we had to get past a number of armed guards.  It only takes three or four shots to bring Batman down, so the goal is to be as quiet, and as stealthy as possible.  Using the grappling hook, we went from corner to corner along the roof, occasionally swooping down on an enemy only to jump quickly out of sight again.  This process requires a lot of thought and pre-planning.  You can’t just jump in and be ready to melee your way through a fight.  Your strength is in the shadows. 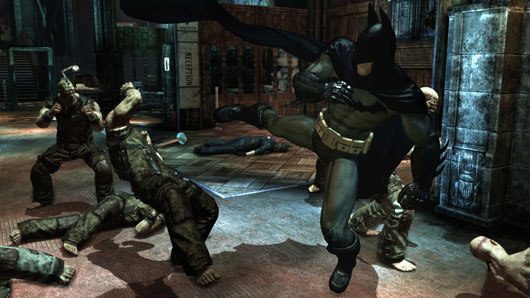 The developers we spoke with indicated that there were six major villains in the game:  Zsasz, Poison Ivy, Bane, Killer Croc, Harley Quinn, and the Joker.  We asked two different developers how much time it took to complete the game and received two strikingly different answers.  One quoted us a play time of 10-15 hours, while another assured us the average was 25 hours.

In addition to the story mode, there are a number of quick play ‘challenge’ modes, where the player could choose to play as either Batman or the Joker through a number of scenarios.

Batman: Arkham Asylum comes out on August 25 on all platforms.  Visit the official site and stay tuned for more info!