Bethsoft has been hard at work expanding Fallout 3 with three downloadable experiences. This latest edition, called ‘Broken Steel’, should actually be considered a minor expansion. At least, thats what it felt like while playing it. The previous two DLC packs seemed like very closed-off affairs. While fun, they did not seem to really be part of the Fallout 3 world. You knew when you were entering and exiting the experience.

Broken Steel, I am happy to say, seamlessly integrates into the game and constantly surprises you even after you think the storyline is over with. Now, I am going to SPOIL THE END of the original Fallout 3 game here so if you have not played it through yet, just buy Broken Steel right now before you do. It makes it all so much better. Now run along…. 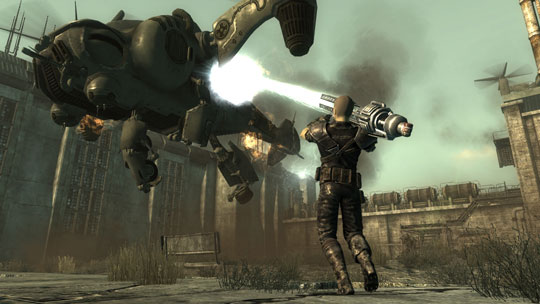 Okay, now that the disclaimer is out of the way, we can get down to business. After the tragic (and hopefully selfless) ending to Fallout 3, your character is all set to meet his or her maker after coming face to face with the statue of Thomas Jefferson and activating Project Purity. Or so it would be if you did not have Broken Steel. Fear not, as when you do have Broken Steel installed you are treated to the familiar end sequence, voiced by the venerable Ron Perlman, but then are awakened two weeks after by Elder Lyons. This alone has you engaged and beginning to ask questions. What has happened in while you were out? Who is that blond woman comatose on the cot across the way? Did Project Purity work as planned? Where is my plasma rifle?

After a chit chat with Elder Lyons, it would seem that Broken Steel is all about the destruction of remaining Enclave forces. It would seem that they are not unorganized as the Elder thought they would be and you are tasked with going to a specific location to meet up with Brotherhood of Steel forces to destroy them. This part seems familiar. In the last two downloadable experiences, the main goal was reaching a far-off location where you would quick-travel to a separate map where the DLC pack’s story would commence. But after exploring the Citadel more and talking with other NPCs, even more opportunities opened up giving me additional quest goals not connected to the Enclave. In this respect, Broken Steel is light-years ahead of the other two packs. While the main quest deals with the Enclave (and a particularly brutal sequence with Liberty Prime) these other quest goals stick around after the main story of Broken Steel is completed. This makes the experience much more immersive. 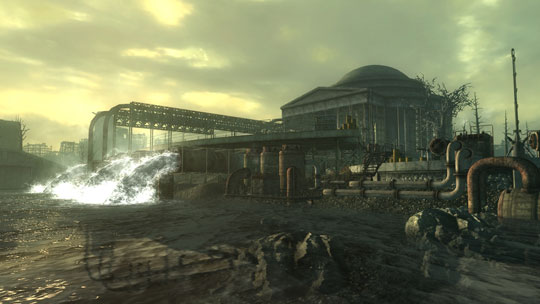 In addition to the multiple quest lines, Broken Steel gives us an eye-opening look into a Wasteland with blue water. At least, it is blue right around Project Purity. The farther away you travel, the less pure the water becomes (kudos to Bethesda for this ‘minor’ detail). Additionally, there are new items all over the place. Most prominent is the spread of newly-purified water, called ‘Aqua Pura’ by the brotherhood, to other regions of the Wasteland. To really bake your noodle, Broken Steel also adds new random encounters (not necessarily attached to the main quest) about the map in places you would not normally expect them (no spoilers – find them for yourself!).

Some new equipment will make its way into your game as well, such as the Enclave hellfire armor and heavy incinerator weapons. These are not the only equipment additions but they will be welcome surprises later. Funny though as much as I appreciated the new armor for the epic main story, I still chose to wear the winterized T-51b power armor I picked up in Operation: Anchorage, go USA!

No longer will you be limited to level 20 in your character’s development. With Broken Steel you can now advance to 30 and they have added additionally cool traits in the mix to boot. One, called ‘Puppies’, makes it so that if your sidekick Dogmeat should die a new pup will eventually be at your home base waiting for you. Another allows you to see every map location! You still can’t fast-travel there but at least you can locate them. 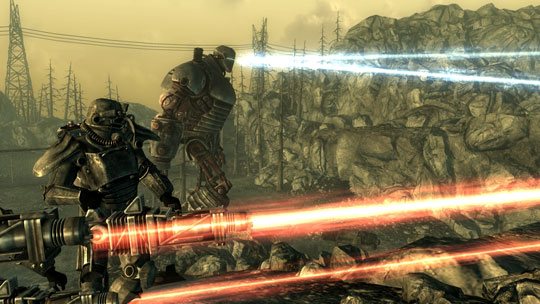 Even with all this goodness, many players did not get to experience it on the announced release date. Broken Steel, like The Pitt before it, released buggy and unplayable. Thankfully, Bethsoft got the issues taken care of and a stable build was released. Or was it? There were quite a few times where I would walk outside of a building and a random NPC would just launch into the air and out of sight right in front of me with no explanation. Other times corpses would continuously flail about in erratic patterns well-after the time of death. Even with these faults, Broken Steel is more than worth the purchase.

Broken Steel is an exemplary DLC pack that adds a ton of new content and experiences into a game already chock-full of them. It allows the epic experience that is Fallout 3 to continue on and players to take their characters to the next level. I know Bethesda claimed they were only making three DLC packs, but now that they have the formula spot-on it would be a shame to stop. Perhaps E3 will bring us some news, so stay-tuned and thanks for listening (or reading) children!