Ideazon is most known for it’s gaming peripherals. Specifically, it’s much lauded ‘ZBoard’ gaming keyboard. Most recently, however, they have gone in a new direction with their ‘Merc Stealth’ gaming keyboard. No longer a fold-up design, the Stealth is a full size keyboard featuring a rugged, black plastic covering and three different colors of back-lighting (with three brightness levels too). As stated previously, it is a rugged and sturdy design which adds a sense of stability to the unit.

The Stealth’s keyboard functions as well as you would expect a keyboard to. Ideazon has had to make some keys dual-purpose, however, to keep the size of the unit down. An example of this is that the numpad 8 key also doubles as the ‘Home’ key. Laptop owners should have no problem switching to this as many of those keyboards do the same thing. The keyboard also features 4 USB 2.0 ports on the back as well as gold-plated microphone and headphone ports. These add-on ports increase the Stealth’s portability and LAN party usage as it is much easier to connect your peripherals to the keyboard than have a bunch of cables streaming around to the back of the pc. The action of the keys are the only thing I was not fully pleased with. This is definitely a personal preference, however I prefer my keys ‘crisp’ and a bit rougher on my fingers. The Stealth’s keys have a softer strike which is probably going to end up saving me from arthritis of the hands but I digress.

The lighting of the unit is great as not only are each of the thee colors (purple, blue, and red) very intense but the cut-outs which allow light to pass through the keys are much larger than many backlit keyboards. Gaming in dark places with this keyboard will never be an issue for you.

Now to the meat and potatoes of the unit: the 34 button gaming area. Set at an ergonomic 15 degree angle from the normal keyboard layout, this gaming area features the important controls you need for playing…well anything really. At the center of the gaming area are larger ‘WASD’-styled control buttons. These are rubberized which help increase your traction on them. This area has definitely been designed with how the human hand is laid out in-mind as the ‘Jump’ key is placed almost perfectly where my thumb sits naturally. My pinky finger can also easily get to and use the ‘Walk’ and ‘Crouch’ keys and there are a multitude of multi-purpose controls around the ‘WASD’ center keys, making it easy to change weapons, select preset battalions, or whatever you like.

This is all enhanced by the ‘Z-Engine’ control software, which allows users to assign their keys different functions. You can create a profile for a game, then create whateverever control you like for the game. After this all you do is drag those controls to the key you want to use it! This is probably the most useful (and user-friendly) gaming keyboard software on the market.

Gaming:
I put this keyboard through its paces in Call of Duty IV, Universe at War, and a few levels of Crysis. The gaming area really decreases your response time by putting everything you need right there in front of you. It did take a bit of getting use to at first, my thumb and pinky have apaprently been trained to strain themselves finding their ‘crouch’ and ‘jump’ keys. It is funny how our bodies adapt to situations. Anyway, they keyboard was a blast to use and it eventually felt more like an extension of my hand than just another input device.

Conclusion: Ideazon’s Merc Stealth gaming keyboard is a gamer’s dream. After using it for a while you will find it hard to go back to a standard keyboard. If you like a keyboard that is gentler on your hands this will do nicely as well, as the gaming area’s offset and the key’s softer strike are better for your joints and nerves. Do yourself a favor and get one of these babies soon! 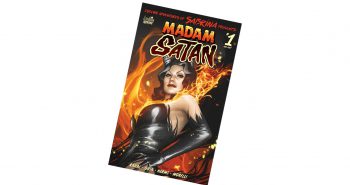 The Chilling Adventures Of Sabrina Presents...