Razer has recently been known for their line of BlackWidow mechanical gaming keyboards. However, the membrane keyboards are not down for the count just yet, as is evident by the new Razer DeathStalker Chroma gaming keyboard. Featuring slim, chiclet style keys and 16.8 million customizable color options, it brings style and performance at a reasonable price point.

Fully-compatible with Razer’s Synapse 2.0 cloud based control panel, the DeathStalker Chroma has three different zones to separately set the backlighting for. The first zone is the QWERTY key layout, the second zone is made up of the arrow and paging keys, and the final section is made up of the numeric keypad. With Synapse 2.0, you can set these zones individually or assign some keyboard-wide presets which show off pretty patterns across all color zones – my favorite of these being the “Wave” pattern which is eye catching to say the least. 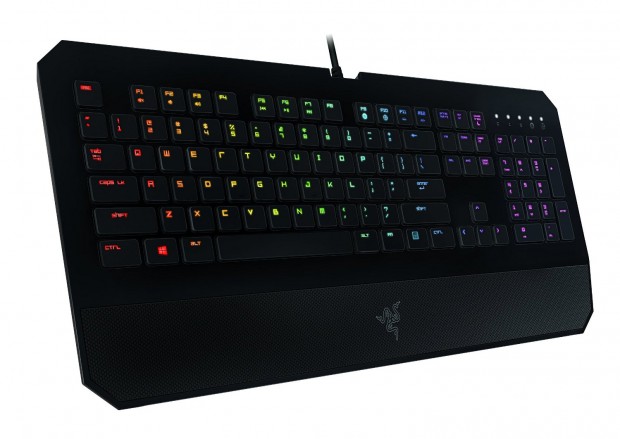 In-game performance is great, and the membrane-based keys didn’t present any kind of detriment to my gameplay sessions. I played quite a bit of Metal Gear Solid V: The Phantom Pain with this keyboard and had a great time doing so. The 10-key rollover capabilities of the keyboard mean that you can press 10 keys down at the same time and it wont get confused. Also, the fixed wrist rest has a great texture that stayed comfortable throughout the night and I had no issues with any of the keys not responding to presses not directly in the center of the key – an issue which more primitive membrane keyboards sometimes have.

Also in the mix is Razer’s 1000Hz Ultrapolling rate which means your PC and keyboard stay in touch VERY often as to reduce any latency (at this point, keyboard latency is practically a non-issue thanks to features like this), a dedicated game mode where the Windows key won’t get in the way of your gaming, and on-the-fly macro programming. One issue that I would watch for in the future is that the plastic of the keyboard area might attract oils and become stained in the future with use – I would recommend carefully wiping it down after heavy usage.

As mentioned, the Razer DeathStalker Chroma has a lot of the features that have made past and present Razer products great but, what I like most about this keyboard is its form factor. It is so flat and thin and the keys are so crisply cut that it reminds me less of a gaming keyboard and more of a futuristic keypad that could be seen in a starship.

Also worth noting is that these membrane-based keyboards are very comfortable to type letters on in your word processor. Some people do not like the click response of mechanical keys and these still have just enough crisp to give the user feedback but also plenty of squish. Also, the keys are extremely quiet to type on, making it great for situations where you may wake someone up by your typing. I was in this predicament for years before my wife and I moved into a bigger place. The mechanical keyboard I had would literally wake her from a sound sleep. If I had this keyboard at the time, maybe I’d still be married…. Just kidding – we are still married. I kid, I kid!