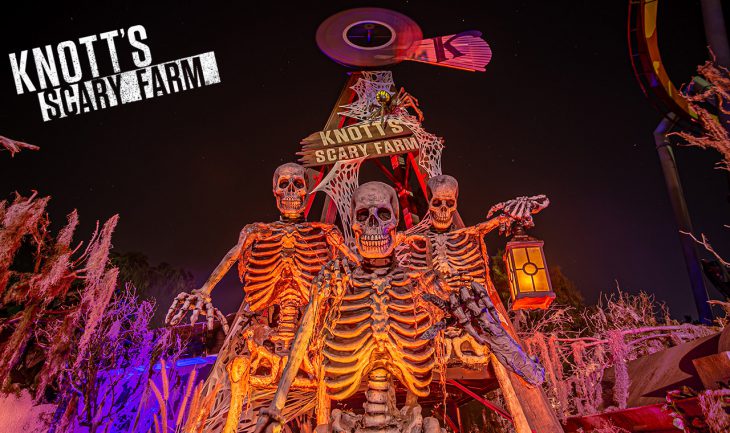 Knott’s Scary Farm is back for 2022 with two new mazes and guests finding themselves on the precipice of next year’s 50th Halloween Haunt. There are signs of change coming…. This is the last year for Pumpkin Eater as well as The Depths and Dark Ride. Further increasing the anticipation is that it is the last year for The Hollow, Camp Snoopy’s scare zone. What will take their respective places next year? A return of The Gauntlet: Festival of Freaks perhaps? Who knows, but for now we should look at what this 49th annual Knott’s Scary Farm has to offer. 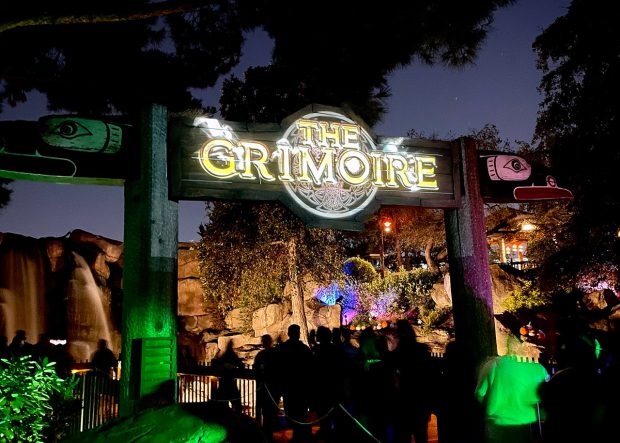 First up are the two new mazes: Bloodline 1842 and The Grimoire. Bloodline 1842 puts guests into a world of two warring vampire clans. It also marks a return of the light gun gimmick first seen in Special Ops: Infected. The various vampire monsters in the maze wear laser sensors and your guns send feedback to a server so you can compare your scores at the end of the experience. While Bloodline 1842 features some very beautiful set design and talent doing the best they can while wearing glow lights on their heads, the gun gimmick simply doesn’t work well enough to be much fun. Bloodline 1842 is claustrophobic and way too many guests are allowed in at one time. Several times was I afraid that I might hit the muzzle of my light fun into the face of a talent or fellow guest. The light guns worked best in the first year of Special Ops: Infected, where guests found themselves guided through a section of Camp Snoopy at a spirited pace. There were narrative and quest moments but the whole experience moved quickly and provided an exhilarating time. While it eats up valuable scare zone real estate, the guns should go back outside – it’s safer and more enjoyable. The second new maze of the year is The Grimoire, a tale of some kids in the woods who find a cursed book. The maze is, like Bloodline 1842, beautifully set dressed and features some very cool moments showcasing how the book has cursed and infected humanity throughout the decades. While it was not quite as enjoyable as Paranormal Inc was (the maze it replaced), it’s a fun time and worth you time in line. I just hope the opening show moment doesn’t get removed in the spirit of making the line go faster. The opening show moment provides fun narrative and framing for the scares within. 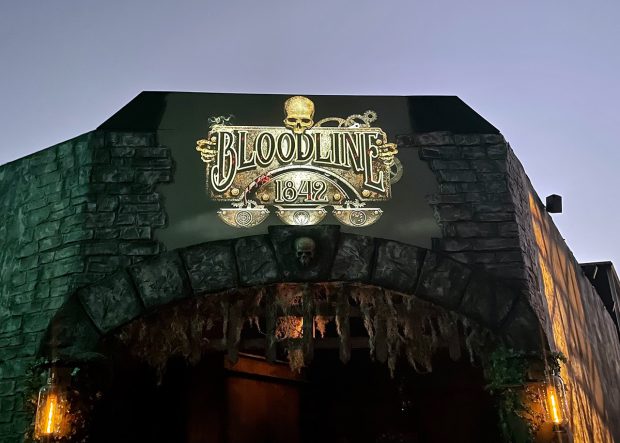 The rest of the returning mazes are the same as last year. Dark Entities continues to provide an ALIEN/Dead Space/The Thing style experience while Mesmer: Sideshow of the Mind conjures up the scares with some great creature effects (despite the removal of its opening show moment from its first year). Origins: Curse of Calico is also still a must-see maze with not only its spooks and ghouls but also its nostalgia factor – they really need to make the Cattawampus an in-park character at some point. Wax Works is still very creepy and I love the scare acting by some of the queue talent as well as the visceral , massive creature at the maze’s climax.

Of course, it is the last year for three mazes: The Depths, Dark Ride, and Pumpkin Eater. The Depths is still an extremely creative and fun maze with so many cool props and gimmicks – I only wish they’d have kept the opening show moment from its first year. Dark Ride, another super-creative maze, is still tons of fun as guests enter the bowels of an old, broken down dark ride and try to survive the carnie inhabitants within. Pumpkin Eater is the only one of the three departing mazes that is showing its age more than the others. Pumpkin Eater has always been a very dark maze but it’s just very uncomfortable and, well, smelly (and not in that pumpkin spice way).

Puppet Up! Uncensored is back at the Scary Farm and, while it is very entertaining with extremely talented puppeteers and improve comics, I just don’t see how it fits in to a Halloween-themed event. I would love to see Knott’s bring in a spooky, entertaining show next year for the 50th – even something developed in-house. They do a great job with their Christmas shows, I am sure they could come up with something incredible with enough budget and time. The best of the shows at this year’s Scary Farm is, without a doubt, the Carnaval du Grotesque. A variety show featuring a plethora of performers and hosted by two gruesome ringmasters, the Carnaval du Grotesque features thrills and chills. It plays at the Calico Mine Stage where The Hanging carried out its final years. Rounding out the show line-up is Conjurers – Dark Magic at the Bird Cage Theatre. Don’t let the spooky name fool you – it is just a magic show. It’s an entertaining magic show but doesn’t really have any dark or scary vibes running through it.

The scare zones at the 49th annual Knott’s Scary Farm are the usual suspects from last time: Ghost Town Streets, The Hollow, Gore-ing 20s, Forsaken Lake, and CarnEVIL. Overall, I can’t say anything negative about the scare zones – every monster I saw was running their gags and scares with vigor and seemed to be having a great time doing it. I especially enjoyed just how different all the zones are – there is a very clear separation between them in everything from costuming to makeup to performance. 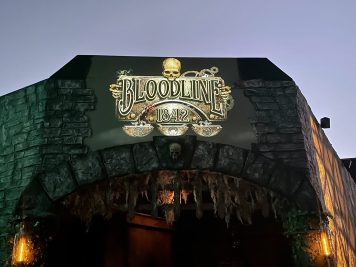 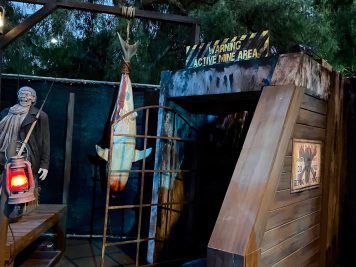 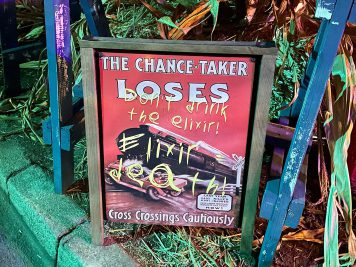 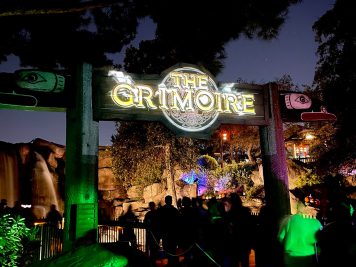 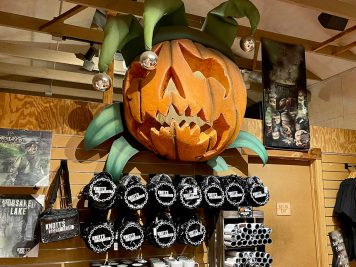 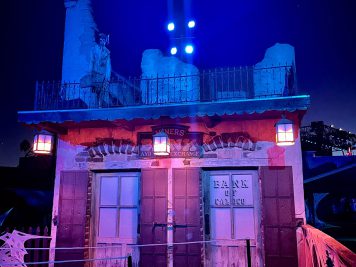 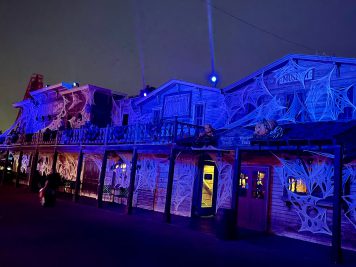 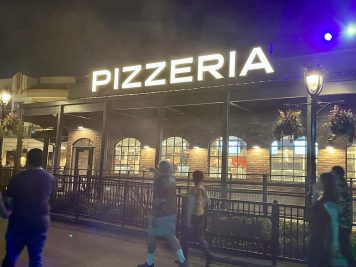 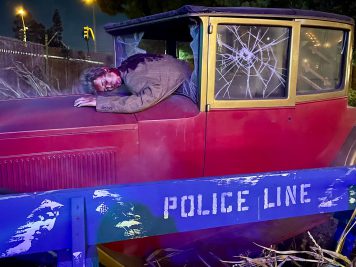 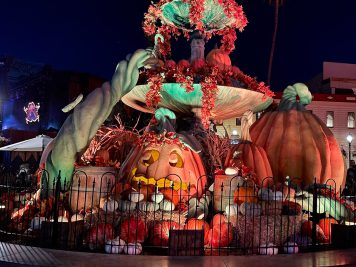 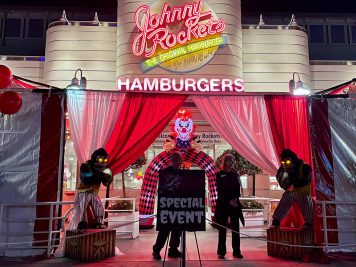 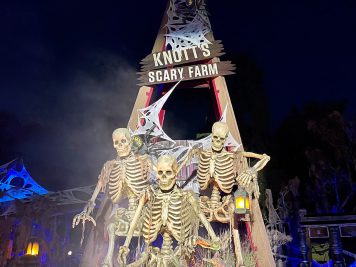 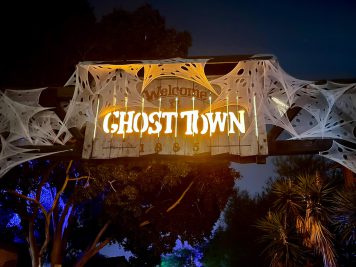 Two issues that were of intrigue this year were the new chaperone and bag policies. Despite the limitations, I found the bag restrictions to be strict but not impossible. Guests just have to only bring what they absolutely need to the park. I do think that there needs to be some explicate instructions on the official website for what guests with special needs should do. Some people might have to bring medications or specialized containers and they should still be allowed inside (also, I am sure they would be, but explicit instructions in the written policy might help alleviate fear). The chaperone policy didn’t seem to be affecting much although I did notice fewer young people than in previous years but that could have just been lower opening night crowd numbers in general. I do appreciate that they’re attempting to hold adults more accountable for the actions of the younger people in their groups. We’ll see how these policies play out next year!

I was still disappointed that there is no maze or experience deeper in Camp Snoopy to bring guests to the depths of The Hollow. In earlier Scary Farm years, they had a maze at the Bear-y Tales Playhouse (a now removed structure). In more recent times, there was a nightly show with the three witches of The Hollow. It would be great to get the three mazes back out of the backstage warehouses and into the park. Having mazes in the park creates a much more organic and integrated park going evening. The parking lot backstage where the three warehouse mazes are located has no real theming and sort of takes you out of the moment while waiting for your turn at the mazes. If they can’t do that, it would be great to see them put more decorations and theming in the warehouse maze area. But, I digress…

Despite that digression, my evening at Knott’s Scary Farm was so much fun and I had a great time in the mazes, scare zones, as well as grabbing a bite to eat at the Ghost Town Grill and catching a few shows. Knott’s Scary Farm runs through October 31st and tickets are available now at the official Knott’s website.