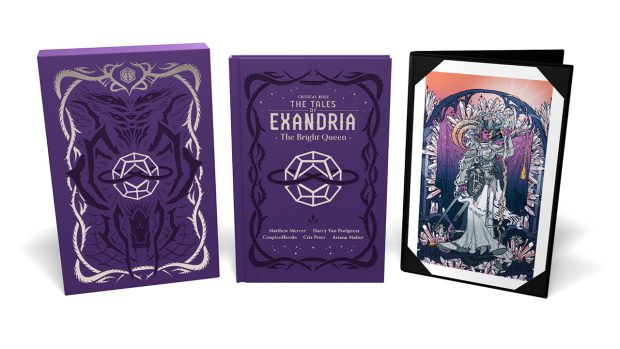 Now available from Critical Role’s online stores, Critical Role: The Tales of Exandria – The Bright Queen Limited Edition features a purple faux leather book and case, burnished and foil-stamped with a unique design, along with a cloth portfolio with a litho by Helen Mask.

An original four-part story by Critical Role’s Matthew Mercer, Eisner Award-winning writer Darcy Van Poelgeest (Little Bird) and artist CoupleofKooks, Critical Role: The Tales of Exandria – The Bright Queen follows Leylas Kryn, the Bright Queen, who has spent multiple lives in pursuit of assembling the otherworldly Luxon. When another piece appears nearby, Leylas sends her eternal lover Quana to collect it . . . with consequences that may threaten the entire Dynasty!

Hope for the future clashes with darkness from the past in this stellar collected volume, ready to take center stage in your Critical Role library! 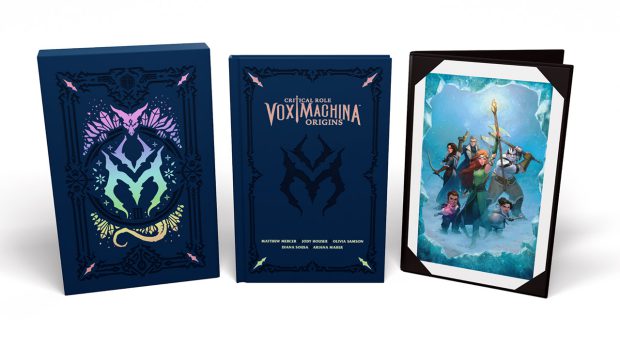 From the New York Times bestselling team of Jody Houser (Orphan Black, Stranger Things), Olivia Samson, MSASSYK (Isola, Gotham Academy), Diana Sousa (Crowded), and Ariana Maher (James Bond, Xena), Critical Role: Vox Machina Origins Volume 3 follows Vox Machina as they enjoy a week in Westruun’s lap of luxury leading up to the Winter’s Crest Festival. But that costs coin, which has a bad habit of running out, so they join an underground fighting ring and bash their way to cash. Unfortunately, their ring-fighting turns out to be just a warm-up for a cold reality when a mysterious attack on Winter’s Crest festivities leaves the whole town magically frozen—including one of their own. Vox Machina will have to save the day again, against a much bigger foe than they first realized!

These limited edition collections are only available through Critical Role’s online stores (US, UK, CA, EU, AU) as exclusives, with no current plans for retail placements. For more information, please visit critrole.com.