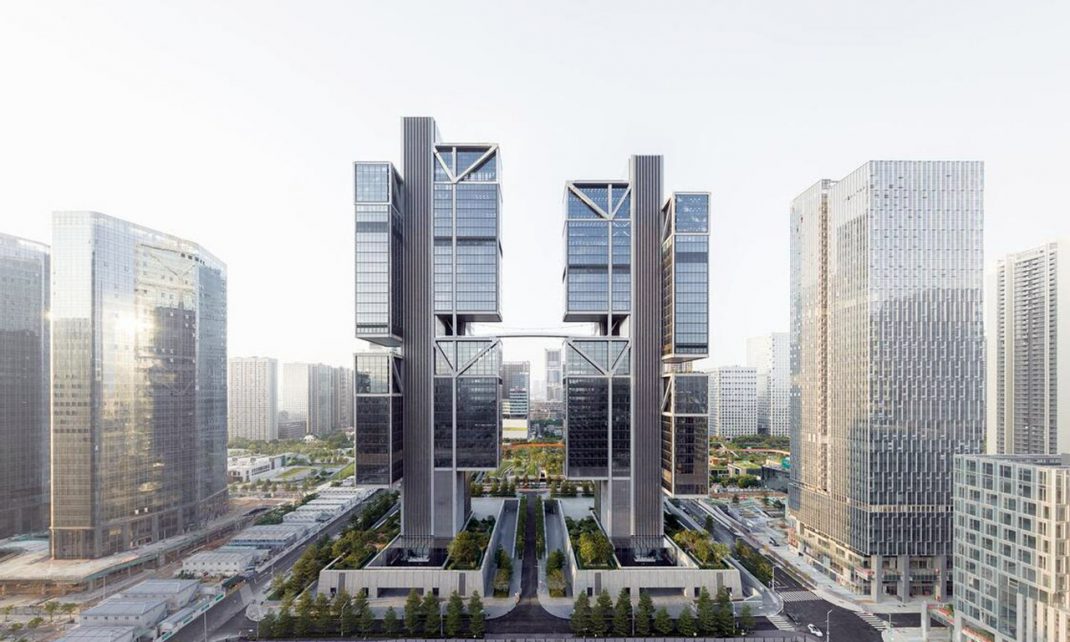 DJI, the world’s leader in civilian drones and creative camera technology, has opened its new company headquarters, DJI Sky City, a cutting-edge innovation hub, matching the company’s philosophy of being a creative community for the skies with groundbreaking architectural structures never before seen in high-rise buildings of this scale. Designed by the world-renowned and award-winning architectural team of Foster + Partners, the two towers – 44 and 40 stories respectively – are set to become a prominent, sustainable new landmark in Shenzhen, China, one of the top ten UNESCO Cities of Design.

“Drone technology has changed the way we experience the world around us, while pushing the boundaries of aerial possibilities,” said Lord Foster, Founder and Executive Chairman, Foster + Partners. “I have enjoyed using DJI products for more than a decade. We are delighted to have partnered with DJI in creating their new headquarters in Shenzhen, which will be the company’s premier center of research and innovation.”

The towers unite DJI employees who have been scattered among several Shenzhen buildings during the company’s rapid growth, bringing them into a purpose-built structure that puts physical form to the company’s name, Da-Jiang Innovations (大疆创新, or “Innovation Without Borders” in Mandarin). Across its 200-meter height, Sky City exemplifies how DJI has matured from a flight technology startup to a global innovation leader.

Across the towers, the company’s office, research, and development areas are arranged in floating volumes cantilevered from central cores by large megatrusses, giving the impression from the distance as if the buildings were suspended in the air. The first use of an asymmetrical suspension steel structure in high-rise towers of this scale, the innovative structure reduces the need for columns, thus creating uninterrupted working spaces that express “Innovation Without Borders” in architectural terms. The structure also houses drone flight testing labs over four stories – tailored for the company’s first-in-class product development practices – made possible by the unique V-shaped trusses that give the towers a distinctive identity, against the backdrop of Shenzhen’s skyline.

At 105 meters, the towers are connected by a 90-meter-long suspension skybridge, a lightweight element that creates an elegant connection between the two volumes. It serves as a symbol to show how all departments at DJI are linked to reach a common goal.

At ground level, the lifted volumes draw the surrounding greenery into the base of the buildings via a sloping podium garden that is open to the public. The ground floor also features public facilities such as a community healthcare center. In this way, the ground of the building is open and inviting – a gesture of DJI’s respect to the urban context and its contribution to the community.

The tower entrances offer the first glimpse of Sky City’s practical, aesthetic, and creative approach to the workplace. Each of the lobbies showcases a black pine surrounded by a Zen garden, set against a striated wall made by the rammed-earth design process. The result is a harmonious combination of hard-pressed geometry and undulating nature, the progress of tomorrow and the roots of the past, complementing each other in peace.

Foster + Partners developed solutions meeting the company’s wish to create a sustainable building. The design of the floorplates maximizes daylight while reducing energy consumption. The innovative TWIN lift system reduces the number of shafts required and increases usable office floor area. Its intelligent control system also allows reduction of energy consumption during off-peak periods. Rainwater is harvested and stored for reuse, and gray water is recycled for irrigation of the landscape – which also buffers rains during monsoon season.

“It took us six years to build the new DJI Headquarters, which is the result of the wisdom and determination of DJI and our valued partners,” said Frank Wang, Founder and CEO of DJI. “We see Sky City as a product unlike any we’ve ever made: our real home. At the beginning of a new era for DJI, we pay great attention to the growth and well-being of every employee. This starts with a work environment that is both practical and delightful. I hope that Sky City will inspire all of us to work together and scale new heights of progress, wisdom, and possibilities to develop solutions that benefit society.”