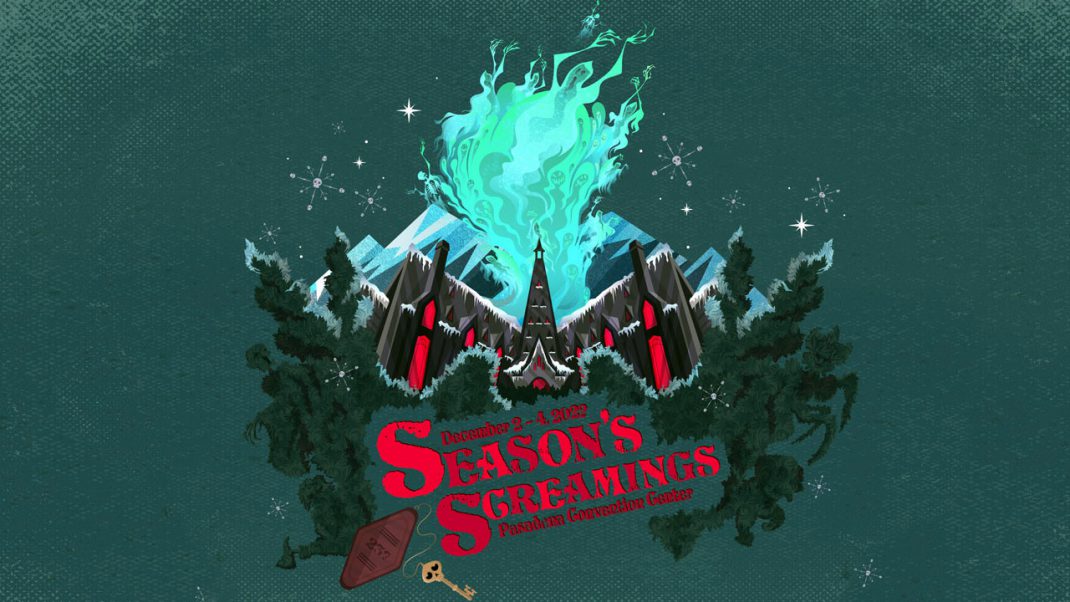 Season’s Screamings, the sinister holiday-themed counterpart to Midsummer Scream, the world’s largest Halloween and horror convention, announces its return to the Pasadena Convention Center December 2-4, 2022. Passes are now on sale at www.midsummerscream.org.

The quintessential mash-up of Christmastime cheer and Halloween horror, Season’s Screamings offers a winter wonderland of ghoulish experiences for the whole family. From a sprawling show floor featuring more than 200 artisans and vendors to a festive stage set to feature world-class panel presentations, Season’s Screamings is set to entertain thousands of fans throughout the first weekend in December.

“This is the fourth iteration of Season’s Screamings, and it’s getting bigger and better each year,” says David Markland, Executive Director of Midsummer Scream. “We love any opportunity to return to Pasadena, and any chance to collide Halloween with other seasons, especially the winter holidays.”

Among Season’s Screamings’ cornucopia of entertainment will be Peepshow Menagerie’s “Island of Misfit Tease” burlesque show on Friday night, a Krampus run on Saturday and Sunday led by Krampus LA, a daily block of holiday horror themed short films curated by HorrorBuzz, photo-ops from exhibitors including Art’s Sideshow throughout the show floor alongside vendors such as Backstitch Bruja, Lugosi Enterprises, Discount Cemetery, Skelly Paper Co., Small Town Weirdo, and Trick or Treat Studios.

Returning for 2022 is the ominous Hall of Yuletide Spirits, a perpetually darkened space filled with holiday-themed haunts and chilling displays. Beginning with a rotten Candy Land entry experience by Fear Farm, this year’s Hall of Yuletide Spirits will feature spirited attractions from some of Southern California’s hottest home and pro haunts including The Dreich Society, The Haunt With No Name… Yet, Casa Calaveras, Santa Ana Haunt, Ghostwood Manor, Prism Haunted House, the Pizza Planet Truck, and Valley Fright Nights.

“We’re really excited about the Hall of Yuletide Spirits returning for 2022,” says Rick West, Co-Founder and Creative Director of Midsummer Scream. “After what promises to be a fantastic Halloween season, these amazing haunters will bring their creativity and enthusiasm to Pasadena for one last romp before retiring to their crypts for the year! We have a solid mix of returning haunters and brand-new partners this year; it’s going to be quite the spectacle!”

The Hall of Yuletide Spirits will also feature Barlow’s Tavern, a holiday hangout where guests 21 and older can enjoy specialty drinks and even pose for a picture with Santa Barlow – Season’s Screamings’ terrifying version of a Santa meet-and-greet, featuring Mr. Barlow from Salem’s Lot.

Season’s Screamings will also host numerous panel presentations and performances throughout the weekend on two stages within the Pasadena Convention Center. This year’s programming includes a heartfelt discussion about How the Grinch Stole Christmas! featuring Sara Karloff, whose father, Boris Karloff, narrated the beloved animated classic, as well as Emmy Award-winning animator and director, Phil Roman who was part of the team that brought the Grinch to life; a panel looking at the History of Sliding – a scareactor technique that began at Knott’s Scary Farm in the early ‘70s and spread to haunts around the world; and a look at “The Shining Legacy” with director Mick Garris commemorating the 25th anniversary of his TV mini-series adaptation of Stephen King’s novel, moderated by Fangoria’s The Kingcast podcast team. Additional programming and schedule will be announced in the weeks to come!