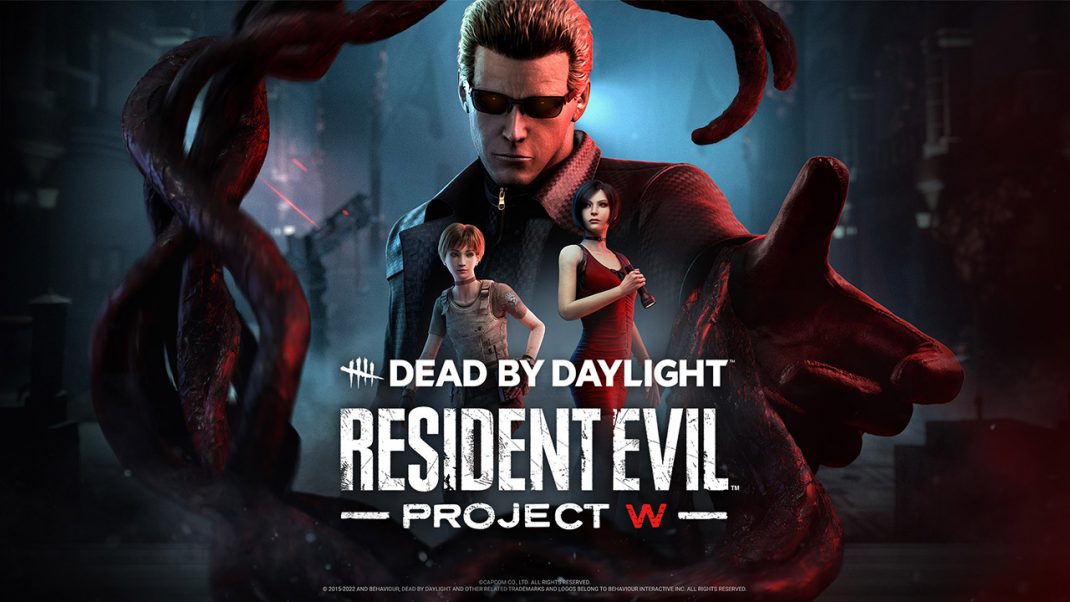 “The future hinges upon this fight”. Starting today, players can step into the Fog as Albert Wesker, Ada Wong and Rebecca Chambers as the highly anticipated second installment of the Dead by DaylightTM and Resident EvilTM partnership takes flight. To celebrate the release of the Dead by Daylight: Resident EvilTM: PROJECT W Chapter, players are also treated to a rework of the iconic Raccoon City Police Department Map. They will also be able to get their hands on the impressive new Outfits from the PROJECT W Collection, which include the Carlos Oliveira, Sheva Alomar and Hunk Legendary Sets for Leon S. Kennedy, Jill Valentine and The Legion, respectively.

Killer mains will be able to step into the shoes of the nefarious Albert Wesker, known in game as The Mastermind. A true icon of the Resident Evil franchise, Wesker is easily recognizable with his sleek blond hair, signature sunglasses, leather trench coat – and of course, his piercing orange eyes. Once a high-ranking official for Umbrella Corporation, his ambition and sense of moral superiority led him to create a powerful weaponized virus: Uroboros. Wesker’s Power, Virulent Bound, allows him to rush forward at an incredible speed, grabbing anyone that stands in his path and infecting them with Uroboros. Though he may appear cool and composed, his explosive power is unmatched.

Two Survivors are making their marks in the Entity’s Realm. Enigmatic and unpredictable, Ada Wong is a complete mystery; her true goal as elusive as she is. Her survival skills make her a valuable ally…provided interests remain aligned. Rebecca Chambers is a talented and gifted young woman who joined the S.T.A.R.S. Bravo Team as a field medic at 18 years old. An asset on any mission, Rebecca will go to great lengths to save a teammate in need – sometimes even risking her own life. ​ ​

Starting today, players will also be able to set foot in the improved Raccoon City Police Department Map. Launched in 2021, the Map has undergone a complete quality of life update in response to player feedback. From now on, the Raccoon City Police Department will be split into two separate variations built around the West and East Wings, with both including the Main Hall. Additionally, more navigational paths have been added inside and outside of the building, leading to improved level design flow and gameplay.

“The Dead by Daylight: Resident Evil: PROJECT W Chapter marks an important milestone for us – as it is the first time we are creating a second Chapter in the same licensed universe,” explains Dave Richard, Creative Director for Dead by Daylight. “It’s an opportunity for our fans to continue immersing themselves in one of the most popular horror universes and it is such a treat for us to continue this prolific collaboration with Capcom.”

“The Capcom Team is delighted to collaborate once more with Dead by Daylight to expand The Resident Evil Story,” explains the publisher in an official statement. “Merging the many iterations of the iconic Resident Evil characters such as Albert Wesker and seeing them stand on their own in a new universe is a proud moment. Melding two iconic horror universes together is not an easy feat – but the results are wonderful and we hope the fans will enjoy.”

In addition to Ada Wong, Rebecca Chambers, and Albert Wesker, players are also able to step into the shoes of Carlos Olivera, Sheva Alomar, and Hunk, thanks to the Legendary Sets available in the PROJECT W Collection.

An Umbrella mercenary with a troubled past, Carlos Oliveira is ready for battle with his messy mane of hair, his heavy camo-printed vest, and tactical cargo pants. Carlos Olivera is available as a Legendary Set for Leon S. Kennedy.

Sheva Alomar is a member of the BSAA on a mission to apprehend a black-market seller of Bio-OrganicWeapons. She is ready for action with her hair slicked back in a ponytail, her alluring and practical purple singlet, and smart knee-high boots. Sheva Alomar is available as a Legendary Set for Jill Valentine.

A mysterious Umbrella specialist whose laser-focus in combat makes him a powerful enemy, Hunk is the ultimate fighter. Donning his signature gas mask, Umbrella armor, and trusted Grim Reaper blade, Hunk is available as a Legendary Set for The Legion.

On top of the three Legendary Sets listed above, fans would be remiss not to take advantage of the slew of outfits available, including 7 Very Rare Outfits. Players can dress Albert Wesker in the Albert Wesker S.T.A.R.S. Outfit, Leon S. Kennedy in the Detective Noir Outfit, Ada Wong in the Undercover Espionage Outfit, Rebecca Chambers in the Cowgirl Outfit, Jill Valentine in the S.T.A.R.S. Outfit, Feng Min in the Jill Cosplay Outfit and Felix Richter in the S.T.A.R.S. Uniform Outfit.