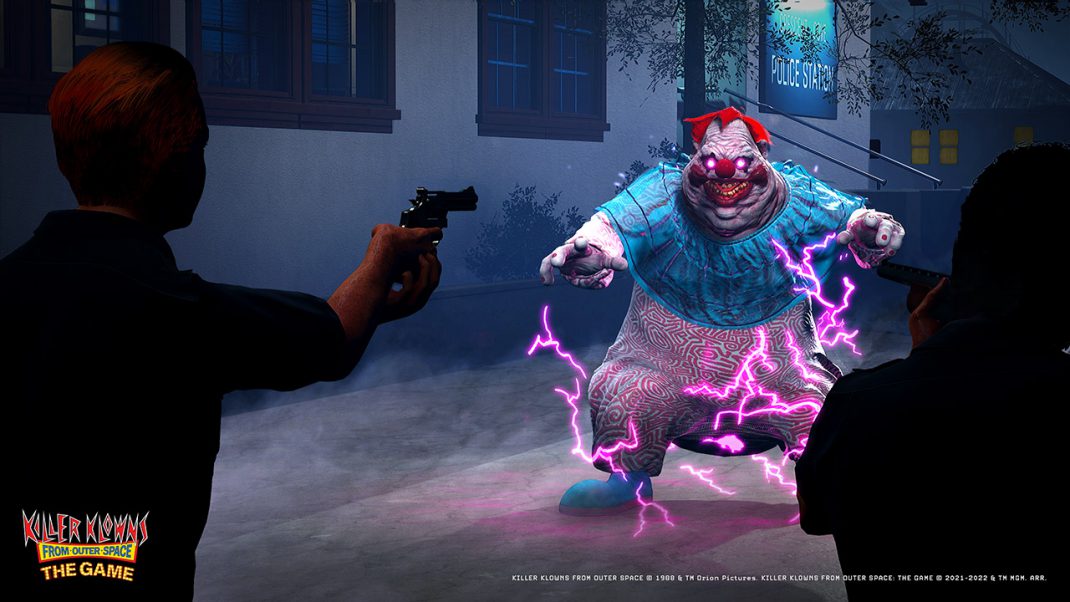 Video game publisher Good Shepherd Entertainment and leading entertainment studio Metro-Goldwyn-Mayer (MGM) have revealed an ambitious and unexpected entry into the multiplayer horror genre: Killer Klowns from Outer Space: The Game, a new 3v7 asymmetrical online multiplayer game inspired by MGM’s 1988 cult horror classic film. When murderous alien Klowns come to feed on the quiet town of Crescent Cove, the locals must work together to fight back and survive the invasion. Players can team up as either Klowns or humans, choosing from a variety of character classes, to explore an expansive, ever-changing map with creepy surprises waiting around every corner.

Developed by Teravision Games, this playfully panic-inducing action experience faithfully recreates the atmosphere of the iconic movie and aims to stir up the asymmetrical multiplayer horror genre in multiple ways. The game is being developed as a live-service title, with multiple content updates planned for post-launch, and is expected to release early 2023 on Steam, PlayStation®5, Xbox Series X|S, PlayStation®4 and Xbox One.

Led by visionary game designer and Friday the 13th: The Game Executive Director Randy Greenback, Killer Klowns from Outer Space: The Game is blood-pumping asymmetrical multiplayer horror, boasting a uniquely campy sense of humor and nightmarish unpredictability that keeps the gameplay fresh and exciting with each session. Randy shared his excitement for the upcoming project:

“It’s a total bucket list item to get to work on the next chapter of such an iconic horror IP like Killer Klowns, especially getting the chance to partner with the original creators of the film and pair them with an incredibly talented development team like Teravision. I can’t wait for everyone to see what rockstars they are and the craziness we’re bringing to the genre.”

SEND IN THE KLOWNS: Take on a role of the iconic Killer Klowns – cooperate in a team of three players, utilize outlandish abilities, hunt humans with zany weapons, and plan your own alien invasion to harvest the citizens of Crescent Cove.

PROTECT HUMANITY: Fight back as a team of seven brave citizens of Crescent Cove – pick your class, explore the city for valuable loot and weapons, avoid getting captured by Klowns, and try to survive – or sabotage – the alien invasion.

WELCOME TO THE TOWN: Crescent Cove is a sprawling arena for unique 3v7 fights between Klowns and humans – boasting various locations, randomly generated map layout and a multitude of tactical opportunities for both teams.

Good Shepherd Entertainment, in partnership with Teravision and MGM, is excited to bring equal parts authenticity and innovation to this exciting new iteration of the cult favorite world, engaging the film’s original composer John Massari to create the score, and making The Chiodo Brothers – the original creators of Killer Klowns –  executive producers on the game:

“When we first heard that someone wanted to make a Killer Klowns from Outer Space game, we all had the same initial reaction: finally! But nothing could have prepared us for the experience that the Good Shepherd Entertainment and Teravision teams were creating. We are thrilled by the sheer passion these folks share for the world of Killer Klowns and the care they have invested in bringing it to life in surprising new ways. We know our fans will be excited to be able to step into the oversized shoes of the Klowns for the first time… Because we are.”

“We couldn’t be more delighted to collaborate with Good Shepherd and Teravision to bring this horror classic to life in an innovative new video game. Not only will the dedicated fans of the original film be excited for the video game’s take on the property, but it will also introduce the cult classic to a new generation of Killer Klowns enthusiasts.”