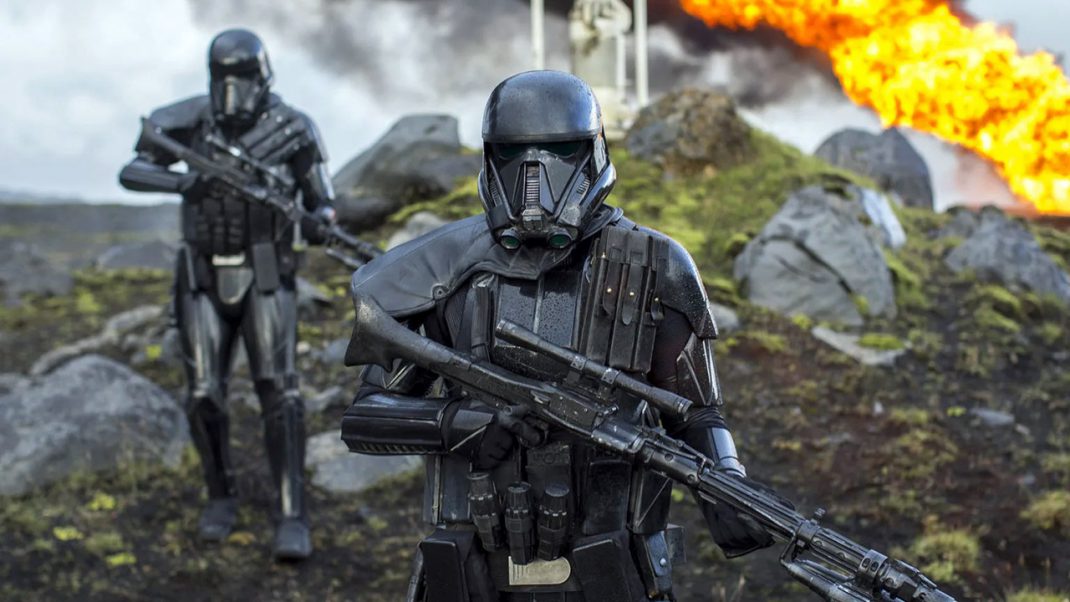 Rogue One: A Star Wars Story Returning to IMAX with Exclusive Look at Andor 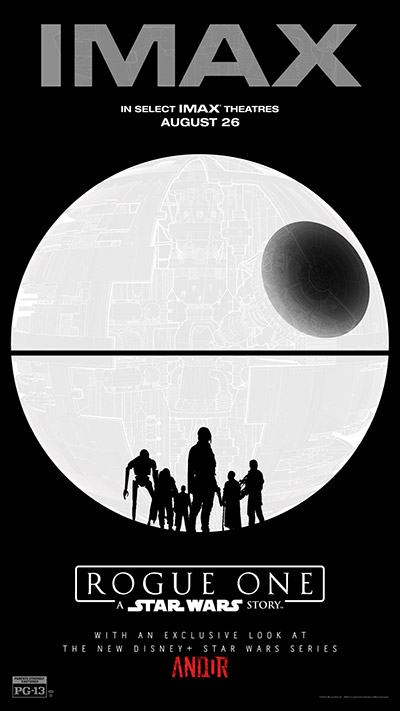 Lucasfilm announced today that IMAX will be showcasing the feature film “Rogue One: A Star Wars Story” and exclusive, special footage from “Andor,” Lucasfilm’s newest, upcoming series for Disney+, in 150 IMAX theaters across the U.S. and Canada for one week beginning on August 26. Tickets are on sale now at participating IMAX theaters: https://www.imax.com/RogueOne and at fandango.com/RogueOneIMAX.

The IMAX release of “Rogue One: A Star Wars Story” will be digitally re-mastered into the image and sound quality of The IMAX Experience® with proprietary IMAX DMR® (Digital Re-mastering) technology. The crystal-clear images, coupled with IMAX’s customized theatre geometry and powerful digital audio, create a unique environment that will make audiences feel as if they are in the movie.

Lucasfilm’s “Rogue One: A Star Wars Story” has garnered over $1 billion at the worldwide box office since its release in 2016. The story follows a group of unlikely heroes, who, in a time of conflict, band together on a mission to steal the plans to the Death Star, the Empire’s ultimate weapon of destruction. This key event in the Star Wars timeline brings together ordinary people who choose to do extraordinary things, and in doing so, become part of something greater than themselves.

“Rogue One: A Star Wars Story” was directed by Gareth Edwards and stars Felicity Jones, Diego Luna, Ben Mendelsohn, Donnie Yen, Mads Mikkelsen, Alan Tudyk, Riz Ahmed, with Jiang Wen and Forest Whitaker. Kathleen Kennedy, Allison Shearmur and Simon Emanuel are the producers, and John Knoll and Jason McGatlin serve as executive producers. The story is by John Knoll and Gary Whitta, and the screenplay is by Chris Weitz and Tony Gilroy.

“Andor” premieres on September 21, with the first three episodes of the 12-episode series. The original series from Lucasfilm will stream exclusively on Disney+.

“Andor” takes place five years before the events of “Rogue One,” when the seeds of rebellion against the Empire were germinating. The special footage from “Andor” offers audiences a look at the story, which explores a new perspective from the Star Wars galaxy, focusing on Cassian Andor’s journey to discover the difference he can make. The series brings forward the tale of the burgeoning rebellion against the Empire and how people and planets became involved. It is an era filled with danger, deception and intrigue where Cassian will embark on the path that is destined to turn him into the rebel hero that we see in “Rogue One.”

IMAX, an innovator in entertainment technology, combines proprietary software, architecture, and equipment to create experiences that take you beyond the edge of your seat to a world you’ve never imagined. Top filmmakers and studios are utilizing IMAX theaters to connect with audiences in extraordinary ways, and, as such, IMAX’s network is among the most important and successful theatrical distribution platforms for major event films around the globe.

IMAX is headquartered in New York, Toronto, and Los Angeles, with additional offices in London, Dublin, Tokyo, and Shanghai. As of December 31, 2021, there were 1,683 IMAX theater systems (1,599 commercial multiplexes, 12 commercial destinations, 72 institutional) operating in 87 countries and territories. Shares of IMAX China Holding, Inc., a subsidiary of IMAX Corporation, trade on the Hong Kong Stock Exchange under the stock code “1970.”

IMAX®, IMAX® Dome, IMAX® 3D, IMAX® 3D Dome, Experience It In IMAX®, The IMAX Experience®, An IMAX Experience®, An IMAX 3D Experience®, IMAX DMR®, DMR®, IMAX nXos® and Films to the Fullest®, are trademarks and trade names of the Company or its subsidiaries that are registered or otherwise protected under laws of various jurisdictions. More information about the Company can be found at www.imax.com. You may also connect with IMAX on Instagram (https://www.instagram.com/imax), Facebook (www.facebook.com/imax), Twitter (www.twitter.com/imax) and YouTube (www.youtube.com/imaxmovies).