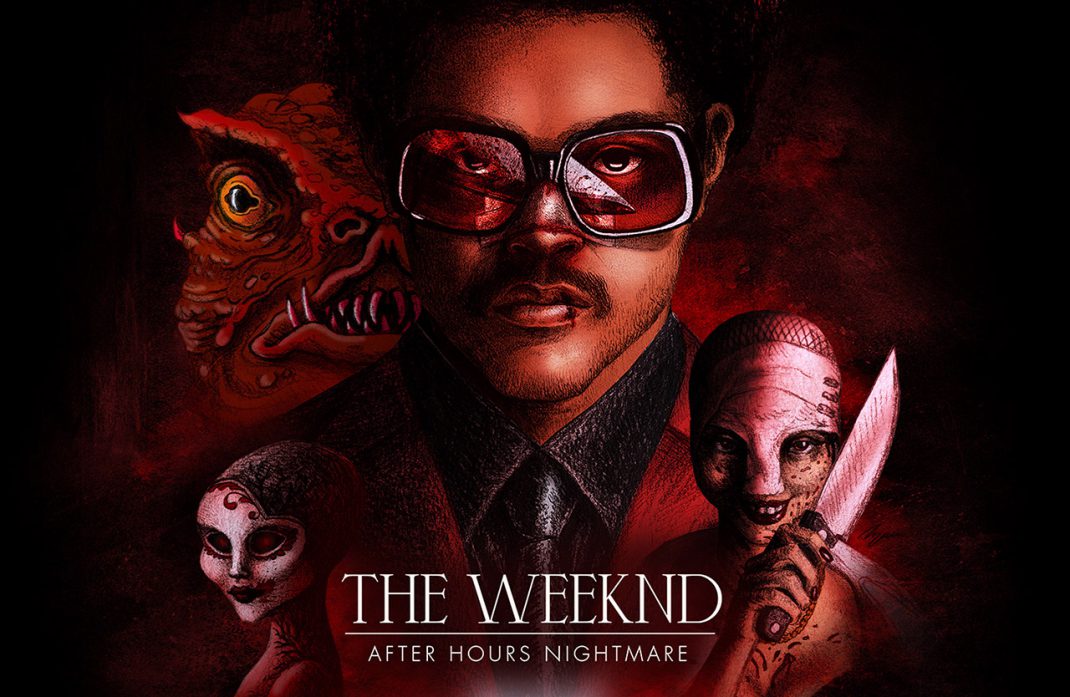 For the first time ever, multi award-winning artist The Weeknd joins forces with Universal Studios’ Halloween Horror Nights to inspire all-new, terrifying haunted houses based on his record-breaking “After Hours” album. Beginning September 2 at Universal Orlando Resort and on September 8 at Universal Studios Hollywood, guests will spiral into the twisted mind of this mysterious artist to experience “The Weeknd: After Hours Nightmare.” 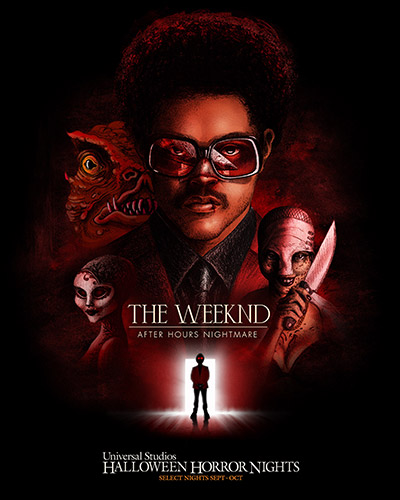 Global phenomenon, The Weeknd, is renowned for his groundbreaking music that blends daring, provocative lyrics with innovative sounds and ominous undertones. “After Hours” is The Weeknd’s fourth consecutive number one album and has spawned multiple chart-topping hits, including “Too Late,” “Heartless,” “In Your Eyes” and the wildly popular single “Blinding Lights” – which is ranked as the #1 Greatest Hot 100 Hit of All Time by Billboard. This fall, select tracks from the riveting album are being reimagined as a horror movie soundtrack for the outrageously haunting experience at Halloween Horror Nights.

The dark undercurrent behind The Weeknd’s enigmatic persona will permeate the all-new Halloween Horror Nights haunted houses on both coasts. With the eerie sounds of “After Hours” reverberating throughout the experience, guests will step into a surreal living nightmare filled with grotesque characters and themes inspired by The Weeknd’s music and short films. As they’re stalked by slashers, bandaged maniacs, gruesome toad-like creatures and other unfathomable horrors from the mind of the artist, guests will be challenged to survive the night while trapped within the terrifying, unexpected world of “The Weeknd: After Hours Nightmare” – a place that only exists in The Weeknd’s vivid imagination and from which one may never escape.

“I always wanted my own Halloween Horror Nights haunted house as Halloween has always been significant to my music, so this is a total dream come to life. I feel like my music videos have served as a launching pad for a collaboration like this, and I cannot wait for people to experience this madness!” said Abel ‘The Weeknd’ Tesfaye.

“We are thrilled to take guests inside of the mind of The Weeknd, who is a Halloween Horror Nights fan himself,” said John Murdy, Executive Producer of Halloween Horror Nights at Universal Studios Hollywood.  “This is an unprecedented haunted house that is going to shatter the expectations of our guests and immerse them in an unforgettable experience that is equally unexpected and terrifying,” added Charles Gray, Senior Show Director for Entertainment Creative Development at Universal Orlando Resort.

All tickets are on sale now for Halloween Horror Nights at Universal Orlando Resort, which begins Friday, September 2 – including online savings on single-night tickets and a variety of Frequent Fear Pass options that allow guests to experience the horror on multiple nights. Guests can also stay close to the screams with vacation packages that include hotel accommodations, one-night admission to the event, tickets to all three Universal Orlando theme parks, and benefits exclusive to Universal Orlando hotel guests, such as Early Park Admission to the theme parks during the day and access to a dedicated Halloween Horror Nights entry gate at night.  Plus, guests can take their visit to the next level with upgrades such as the guided R.I.P. Tour, Express Pass, the daytime, lights-on Behind the Screams: Unmasking the Horror Tour and Scareactor Dining – where guests can fuel up for the fear with a themed dinner buffet and special photo ops with scareactors on select nights. Annual passholder discounts on select products are also now available, and Florida residents can save on vacation packages when they stay two nights or longer. For more information on all offers and ticket products, click here.

Both events will run select nights through Monday, October 31, and more details and haunted houses will be revealed soon. For more information and to purchase tickets, visit www.HalloweenHorrorNights.com.