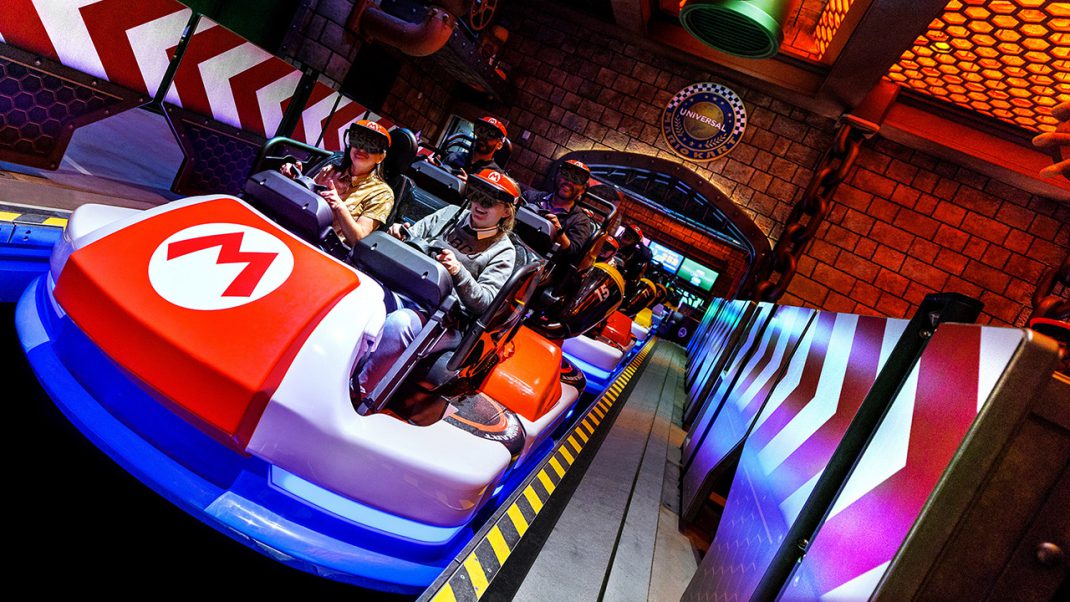 When “Mario Kart™: Bowser’s Challenge” opens in SUPER NINTENDO WORLD™ at Universal Studios Hollywood in early 2023, guests and fans will find themselves immersed in one of the world’s largest, most interactive rides they have ever experienced. It seamlessly fuses augmented reality with projection mapping technology and actual set pieces along a moving ride track to debut a ride that’s unparalleled anywhere within the theme park industry.

The highly-anticipated opening of SUPER NINTENDO WORLD at Universal Studios Hollywood represents the first SUPER NINTENDO WORLD to debut in the United States, designed to transport theme park guests and Nintendo® fans into the world of Mario, Luigi and Princess Peach to be part of the Mushroom Kingdom.

Guests will access SUPER NINTENDO WORLD via the iconic Warp Pipe to enter the land where they will find the “Mario Kart: Bowser’s Challenge” ride located within Bowser’s Castle.

This innovative achievement will propel guests into a multi-dimensional experience that recreates iconic environments from the Mario Kart games and where no two races are alike. “Mario Kart: Bowser’s Challenge” is also one of the most complex rides ever built within the entertainment industry.

The sophisticated ride is a multi-sensory cornucopia of color, sound and movement that invites guests to navigate familiar environs through the creative use and integration of head mounted augmented reality (AR) goggles—a key point of differentiation that distinguishes this ride from other theme park attractions.

From the depths of the dungeon within Bowser’s Castle, guests will climb aboard stadium-style, four-seat Mario Kart vehicles inspired by the video game, put on their AR goggles …and then with a 3-2-1 GO! signal from Lakitu, they will be off to the races.

The premise is simple but equally inspiring and challenging and will appeal to guests of all ages regardless of gaming experience. As part of Team Mario, guests will steer through courses underwater and in the clouds to compete for the Golden Cup while collecting coins to defeat Team Bowser and win.

“Mario Kart: Bowser’s Challenge” raises the stakes for guests as an intriguing and repeatable ride with a variety of outcomes.

SUPER NINTENDO WORLD is conceived in partnership with Nintendo and the visionaries at Universal Creative to deliver exhilarating entertainment with innovative technological achievements inspired by characters and video games that have appealed to Nintendo fans for generations.

The immersive land will be a visual spectacle of vibrant colors and architectural ingenuity located within a newly expanded area of Universal Studios Hollywood that will feature the groundbreaking ride, “Mario Kart: Bowser’s Challenge,” and interactive areas, to be enjoyed by the whole family, along with themed shopping and dining to enhance the entire experience.

Universal Studios Hollywood and guests continue the countdown to the land’s early 2023 opening with the Feature Presentation retail store, well stocked with SUPER NINTENDO WORLD merchandise such as Mario and Luigi themed apparel and iconic character hats and a selection of plush characters, including Mario, Luigi, Yoshi and Bowser.