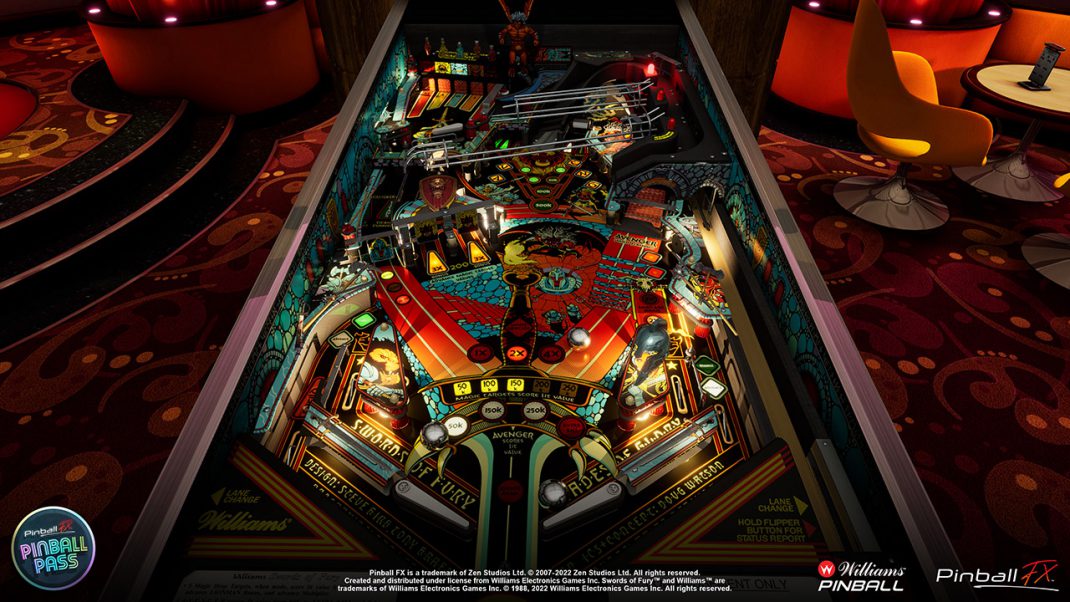 Zen Studios has announced that the 1988 solid-state Williams™ pinball classic “Swords of Fury” is now available in the early access edition of Pinball FX on the Epic Games Store. In addition, six classic Williams tables, previously released in Pinball FX3 with Williams Pinball Volumes 4 and 5, are also available today for the first time in Pinball FX, fully remastered with updated graphics and features.

Unleash the “Swords of Fury” pinball table and prove your might in a world of sword and sorcery full of heroes, villains, and mythical monsters. Enjoy one of the best soundtracks in pinball history as you adventure through Ogres Alley and battle foes on the mini-playfield for big jackpots. But watch out – once your score gets high enough, the table adapts in difficulty to really test your skills! “Swords of Fury” can be purchased with in-game tickets and is free for Pinball Pass subscribers.

If that’s not enough pinball excitement, six previously released tables from Williams Pinball Volume 4 and Volume 5 are now available for the first time in the new Pinball FX: “White Water,” “Red and Ted’s Road Show,” “Hurricane,” “Tales of the Arabian Nights,” “Cirqus Voltaire,” and “No Good Gofers.” These classics can be played in both their genuine original forms, as well as remastered with updated graphics, animated toys, and a host of new features. Each table can be purchased individually with in-game tickets, and all are free to play for Pinball Pass subscribers.

Pinball FX’s newest update, out now, adds official support for pinball cabinets, letting players enjoy any table with advanced graphical options on their own custom-built hardware. Cabinet Mode is free for everyone throughout early access, and the process is now greatly streamlined so users no longer need to submit pictures of their rigs to customer service as in previous titles. Simply enable Cabinet Mode in game and immediately access your favorite tables on your preferred setup.

When Pinball FX officially launches later this year, Cabinet Mode will be offered as a one-time purchase with a “Pay What You Want” model (available for as low as one ticket). It will also be included as part of the Pinball Pass. The mode will expand after launch with its own dedicated development roadmap, rolling out new features to give cabinet users an even greater experience.

The latest Pinball FX update also introduces the new “Build Your Bundle” system, offering automatic discounts as you add more tables to your in-game cart, as well as when you add three or more tables from the same brand family (e.g., Williams, Universal, Zen Originals, etc.). The more you buy, the more you can save! These discounts can be stacked, and they apply to both brand-new tables and classic remasters. They can also be stacked with any in-game sales and promotions throughout the year.

Pinball FX is free to download in early access for PC on the Epic Games Store. It is expected to officially launch on PC via the Epic Games Store, PlayStation®5, Xbox Series X|S, PlayStation®4, Xbox One, and Nintendo Switch later this year. Keep up with the latest updates, weekly challenges & grand tournaments by visiting www.PinballFX.com and following the team on Twitter, Instagram and YouTube.