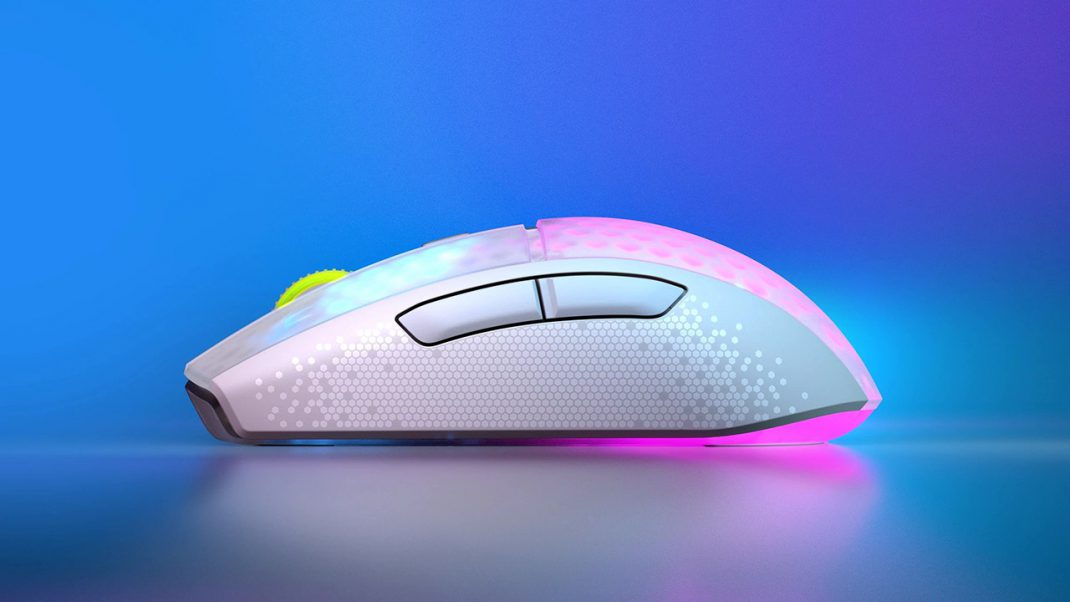 ROCCAT, Turtle Beach Corporation’s (Nasdaq: HEAR) award-winning PC peripherals brand, today revealed the new Burst Pro Air as the premium wireless addition to its Burst family of lightweight PC gaming mice. Like its wired Burst Pro counterpart, the Burst Pro Air is designed for PC gamers that prefer the comfort and feel of an ergonomic symmetrical mouse with a lightweight design, and wireless freedom. The wireless Burst Pro Air is lightweight at 81g and delivers ROCCAT’s core performance components like the Owl-Eye Optical 19K DPI sensor and ridiculously fast Titan Optical Switches, while Stellar Wireless technology optimizes and manages wireless signal strength and battery use for optimal performance. The Burst Pro Air has a rechargeable battery life of up to 100 hours, and PC gamers can enjoy up to five hours of gaming after rapid-charging the mouse for only 10-minutes. The Burst Pro Air’s revolutionary transparent Bionic Shell also returns, this time updated with additional LEDs for a more consistent and vibrant RGB lighting experience. The Burst Pro Air is now available for pre-order at www.roccat.com and participating retailers worldwide and launches globally on April 26, 2022.

“Our wired Burst Pro was well-received by FPS players in our community who prefer an ergonomic and symmetrical mouse, and we’re delighted to now offer gamers who prefer wireless all those same benefits with the Burst Pro Air,” said René Korte, ROCCAT Founder and General Manager for PC Peripherals at Turtle Beach. “The Burst Pro Air is loaded with all our latest technology, and even though it’s wireless it remains lightweight and comfortable thanks our unique Bionic Shell design. The Burst Pro Air meets all the needs of today’s competitive PC gamer.”

Additionally, ROCCAT’s ridiculously fast Titan Optical Switches give a responsive click with incredibly rapid actuation for unparalleled speed and precision. The Titan Optical Switch is twice as fast as a mechanical switch and twice as durable, clocking in at a scorching 0.2ms actuation speed for up to 70 million clicks.

Additionally, while most wireless mice are typically heavier, the Burst Pro Air is lightweight at just 81g thanks to ROCCAT’s unique water-and dust-resistant Bionic Shell design. The Burst Pro Air also houses four LED zones that light up to reveal its inner honeycomb structure. Once connected, gamers can use ROCCAT’s AIMO RGB lighting engine – which produces a vibrant lighting display in 16.8 million colors – to sync with other compatible AIMO-enabled products for RGB illumination that flows from one ROCCAT device to the next.

When the time to recharge the Burst Pro Air eventually arrives, the flexible and lightweight PhantomFlex cable feels as close to “wireless” as possible. The Burst Pro Air’s heat-treated pure PTFE glides are also a game changer. The additional heat-treatment means the Burst Pro Air comes pre-tuned to deliver incredible glide and smooth mouse movements right out of the box.

Adding to its myriad of features, the Burst Pro Air also supports the NVIDIA Reflex Analyzer. NVIDIA G-SYNC displays with Reflex have the world’s first and only system latency analyzer that detects clicks coming from gaming mice and measures the time for the resulting pixels (weapon muzzle flash) to change on screen. When using ROCCAT’s Kone XP mouse in conjunction with an NVIDIA G-SYNC display with Reflex, gamers can measure and improve full peripheral and end-to-end system latency.