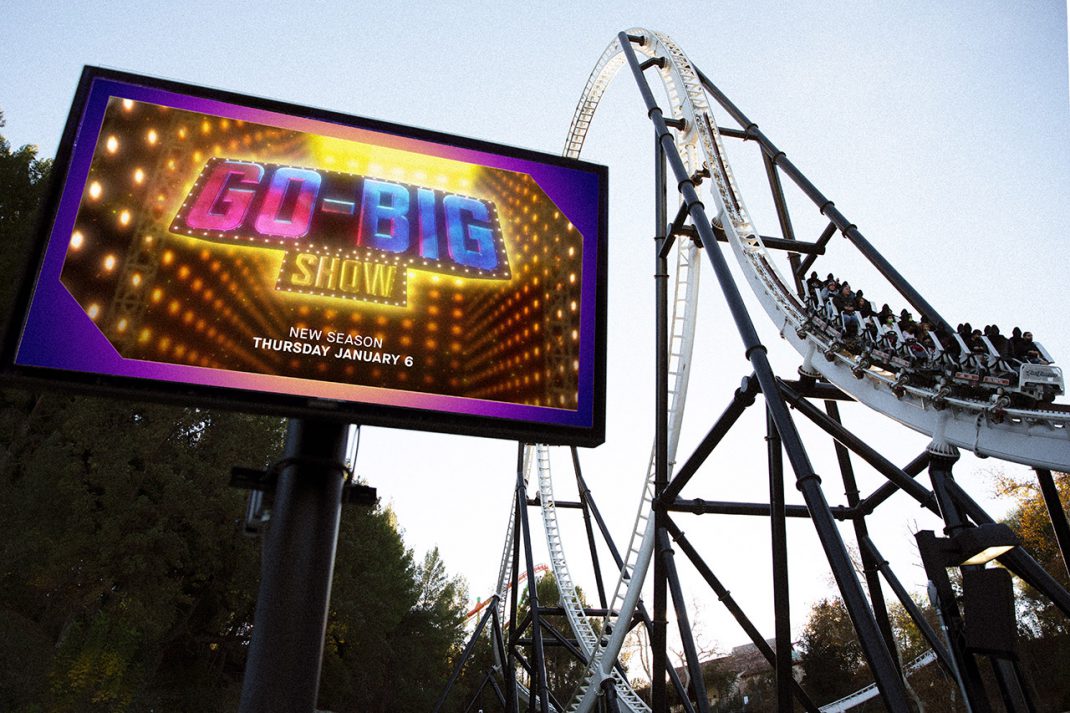 With the second season of “Go-Big Show” on deck for a January 6, 2022 premiere, TBS and Six Flags Theme Parks today announced a partnership that brings the all-in spirit of the Go-Big Show to Six Flags theme parks nationwide.

Equal parts extreme talent competition and party, “Go-Big Show” features daring performances and non-stop Oh-My-God moments as contestants vie to win over judges Rosario Dawson, Jennifer Nettles, Cody Rhodes, and T-Pain to take home a $100,000 prize. The first season of the hit TBS show starred intrepid performers and one-of-a-kind acts who brought their A-game to the Go-Big stage as they balanced on their faces, performed feats of strength, completed BMX cycle mega ramp stunts, drove monster trucks and souped-up motorcycles, and shot bows and flaming arrows with their feet. Hosted by Bert Kreischer, the second season of “Go-Big Show” promises to go even bigger than the first.

“In celebration of the season 2 premiere of TBS’ “GO-BIG SHOW,” Six Flags went BIG to give fans across the nation the most extreme park experience ever. Inspired by the death-defying stunts of GO-BIG SHOW, we launched the Go-Big Experience on the Texas SkyScreamer for the first time ever. At TBS, we believe you have to Go-Big or go home and now, in partnership with Six Flags, fans can experience first-hand the daring world of “Go-Big Show,” said Telmo Tabuas, Senior Vice President of Program Marketing at TBS, TNT, and truTV.

On December 18, Six Flags Fiesta Texas in San Antonio, Texas, unveiled the Go-Big Experience on SkyScreamer. Not for the faint of heart, the ride is modified to ramp up the chills with “Go-Big Show.” A select few of the ride’s traditional swings are being replaced by harnesses. Rather than just sit, fearless riders ready to go-for-it strap in and soar 200 feet in the air at full speed in a belly-down arms-out flight position. The Go-Big Experience on SkyScreamer runs for three weeks and marks the first time that a Six Flags attraction has been modified for a limited-time promotion.

Participating Six Flags Theme Parks throughout the US introduced the Go-Big Funnel cake on December 10. A supersized take on the theme park classic, the Go-Big Funnel cake combines a gigantic stack of fresh funnel cakes with an epic helping of soft-serve ice cream, chocolate sauce, berries and whipped cream. Indulging in the Go-Big funnel cake sundae may not require nerves of steel or advanced training, but it’s a culinary challenge that requires a Go Big or Go Home attitude.
“Our strategic partnership with TBS brings the extreme epicness of “Go-Big Show” from the screen to our guests in one of the most endemic and exciting partnership programs Six Flags has developed. We are thrilled to be partnering with TBS to take our guests’ in-park experience to the next level with this unique, limited-time ride integration and food offering.” said Vice President of North America Strategic Marketing & Partnerships Stephanie Borges.

The partnership between TBS and Six Flags officially kicked off with the release of the second season trailer of “Go-Big Show” on December 13 when, through a social media sweepstakes, TBS and “Go-Big Show” gave away holiday kits that included Six Flags tickets.