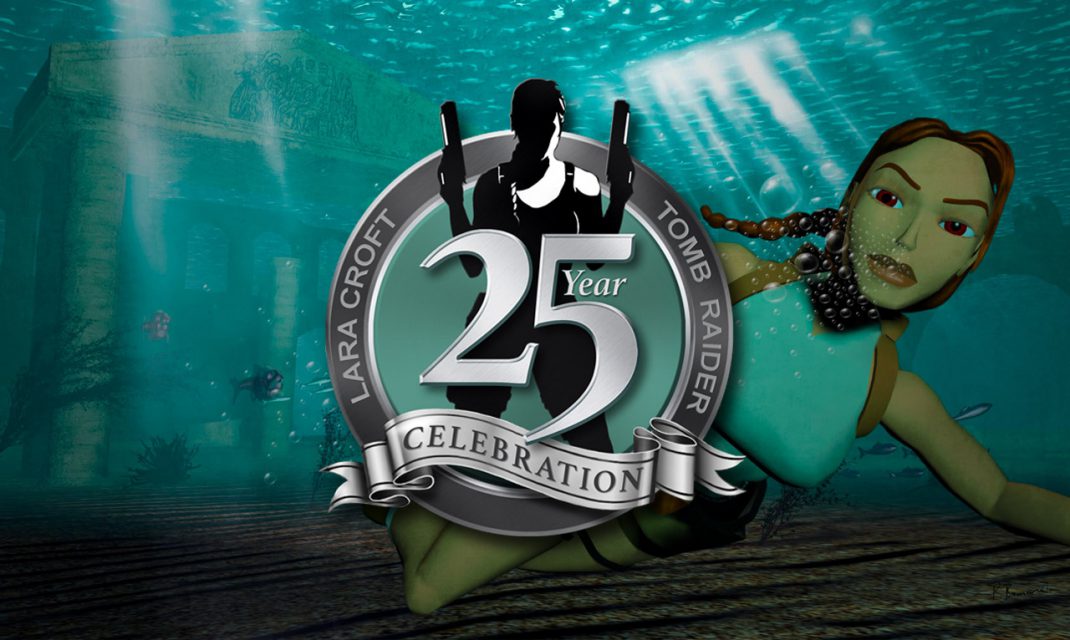 Launched in October 1996, the Tomb Raider series of videogames has sold over 85 million copies worldwide across more than 20 titles and won dozens of industry awards. Its protagonist Lara Croft® is one of the most recognizable videogame characters in the world and has become an icon beloved by tens of millions of fans around the globe. The Tomb Raider franchise is also a pop-culture mega-hit, with three movies, several comic book series, a variety of successful merchandise, and soon a new animated television series.

Below are just a few of the upcoming 25th Anniversary initiatives Tomb Raider fans can expect in the coming months.

As part of the celebration of Tomb Raider’s 25th anniversary, many Tomb Raider games and add-ons on Steam, Humble Bundle, Green Man Gaming, GOG.com, the Square Enix Store, the Xbox Games Store, and PlayStation Store are on sale, with discounts of up to 89%. Interested gamers need only visit the online store of their choice and search for “Tomb Raider” to see what deals are available on their platform.

Netflix and Legendary Television are hard at work on a new Tomb Raider anime series with Powerhouse Animation, the studio behind such hits as Castlevania, He-Man and the Masters of the Universe, and Blood of Zeus. Last month it was announced that Hayley Atwell (Captain America, Mission: Impossible 7) will be the voice of iconic adventurer Lara Croft, and today the companies also announced that Allen Maldonado (Heels, The Wonder Years) has joined the cast as the voice of tech expert and colleague Zip, and Earl Baylon will reprise his role from the video game as the voice of one of Lara’s most-trusted friends and voice of reason, Jonah Maiava.

Picking up after the events of the highly successful Tomb Raider videogame Survivor trilogy as told in 2013’s Tomb Raider, 2015’s Rise of the Tomb Raider, and 2018’s Shadow of the Tomb Raider, the animated series will chart the globetrotting heroine’s next chapter as she takes on the role of the iconic tomb raider that she is destined to become. Twenty-five years after her first game appeared, Lara continues to explore new territory.

Tomb Raider in the Real World

In 2022 Tomb Raider fans will have two new ways to experience the game in the real world.

Crystal Dynamics is working with Little Lion Entertainment to create Tomb Raider: The LIVE Experience in London. Little Lion is an award-winning attractions company with a pedigree in creating five-star immersive theatrical experiences.
Tomb Raider: The LIVE Experience will give fans the chance to dive into the world of Tomb Raider. For the first time ever, teams of visitors will work together while fully immersed in a genuine Tomb Raider adventure, forging their own destiny alongside recognizable characters from the blockbuster franchise. This groundbreaking immersive adventure drops visitors into a race against time as they help Lara Croft solve a mystery that will save the world.

Also making its debut in 2022 will be The World of Lara Croft – 25 Years of Tomb Raider, an exhibition curated by the Storyworld museum in Groningen, the Netherlands. Storyworld is a museum dedicated to the art of storytelling in comics, animation, and games, with a focus on the creativity involved in bringing stories to life.

The World of Lara Croft details the history of Tomb Raider games and media, the art and design of the iconic game franchise, and the popular appeal of both the game and its lead character. The exhibit includes content from the game’s origins in 1996 through the most recent Survivor trilogy, which began in 2013 with the rebooted Tomb Raider game. Visitors will learn about design details, developer insights, and elements of Tomb Raider in the real world, including samples of the franchise’s merchandise over the years and appearances of Lara Croft in movies and comics.

More information about the Storyworld museum can be found at https://www.storyworld.nl/en.

Crystal Dynamics believes strongly in giving back to the community and has several charity initiatives underway for the 25th anniversary celebration.

In honor of the many talented women, including writers, voice talent, actors, models, artists, and game developers, who have brought Lara Croft to life over the years, the company has donated $25,000 to the International Rescue Committee.

An additional donation of $20,000 was made in the name of Camilla Luddington to Women for Women International as a special thank-you for the passion and phenomenal performance she brought to Lara Croft in Tomb Raider (2013), Rise of the Tomb Raider, and Shadow of the Tomb Raider. Her award-winning performances laid the groundwork for the future of the franchise.

A video featuring some of these women congratulating Tomb Raider and Lara Croft for the 25th anniversary can be watched at: https://www.youtube.com/watch?v=n-1ZAQa_jjo.

In addition, on November 6 Crystal Dynamics will participate in a 24-hour charity drive for Extra Life which will raise funds for local San Francisco Bay Area UCSF Benioff Children’s Hospitals. The company has set aside a $25,000 donation to celebrate 25 years of Tomb Raider and hopes to raise another $25,000. Starting today, over a dozen rare items from Tomb Raider history have been listed on the eBay for Charity platform to get a head start. Buying one of these items is a great way for fans to own a part of video game history while also donating to a great cause.

Finally, throughout 2021 Crystal Dynamics has been commissioning talented artists from around the world to reimagine Tomb Raider box art throughout time. At the end of the year, the company will host a charity initiative through the Square Enix Store to purchase a full set of 15 physical prints of the reimagined box art with all proceeds going to Girls Make Games. The current set of prints can be seen here: https://www.flickr.com/photos/tombraiderofficialflickr/albums/72157718242566762.

25 Years of Tomb Raider and Counting!

These are just a few of the new initiatives that fans can look forward to in the coming months, and they come at the tail end of an entire year celebrating Lara Croft and Tomb Raider’s 25 years of adventures. Throughout 2021 Crystal Dynamics has been highlighting the franchise’s amazing history at https://tombraider.com/25.

More announcements about the future of Tomb Raider will be coming soon as Crystal Dynamics and Square Enix lay the groundwork for the next 25 years of this iconic franchise.