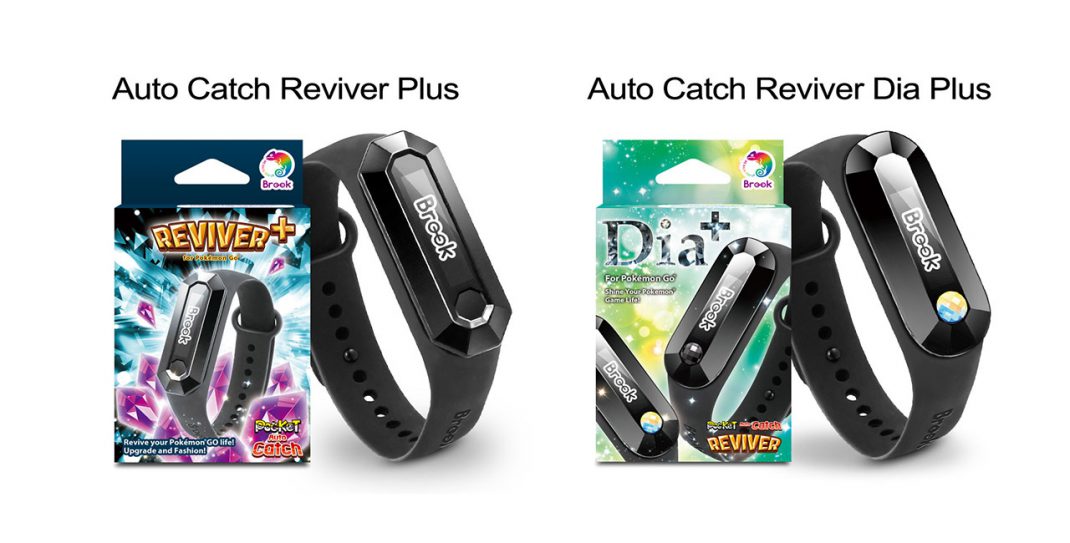 Gaming accessory brand Brook today announced the official release of the next iterations of their wildly popular Pocket Series of wearables – the Auto Catch Reviver Plus and the Auto Catch Reviver Dia Plus. Popular with Pokémon Go players around the world, both new models of the Auto Catch Reviver come packed with community-requested and game supporting features designed to make every trainer successful. Both models are now available at retailers worldwide at the MSRP of $60 and $67, respectively.

Listening directly to Pokémon trainers around the world, the new and improved Auto Catch Reviver units come packed with handy features designed to make every Pokémon collection session a breeze. One major issue trainers had with previous models was that there was no warning if their wearable was disconnecting from the game, often resulting in missing rare Pokémon or items from special events. The new Disconnection Reminder feature will now alert players with haptic vibration to alert them that the device is about to disconnect from the game and prompt them to take action. The Auto Catch Reviver Plus and Dia Plus will also feature a battery capacity display on-screen, which was absent in earlier models, so that no trainer will have to struggle with battery levels during their collecting sessions.

To manage both function and settings, each unit will come pre-installed with Brook’s exclusive Pocket Center app. Using the app, trainers can manage their auto-catch features, offline push notifications (Android only), and, most importantly, automatic firmware updates. All future products in the Pocket Series line of wearables will also ship with Pocket Center pre-installed.

For the fashion forward trainer, Brook has also released the stylish Pocket Auto Catch Reviver Case, an exclusive leather case designed specifically for the Reviver and Revier Dia line. Besides offering additional protection from the elements, the case also adds an extra degree of portability and can be clipped to a backpack or belt.

Since the launch of the first Pocket Series Auto Catch in 2017, more than 350,000 trainers have taken their game to the next level with Brook’s Pocket series. The core features of the line is to allow players to automatically catch Pokémon and collect items while playing Pokémon Go. Various models with differing functionality appeal to trainers of all levels, as well as providing both fun and practical features such as waterproofing, shock and drop resistance, different color schemes, and even a color screen on the high-end Pocket Series Auto Catch Watchic model.

Click here for more information on the Reviver Plus.

Click here for more information on the Reviver Dia Plus.

Click here for more information on the Reviver Plus Case.