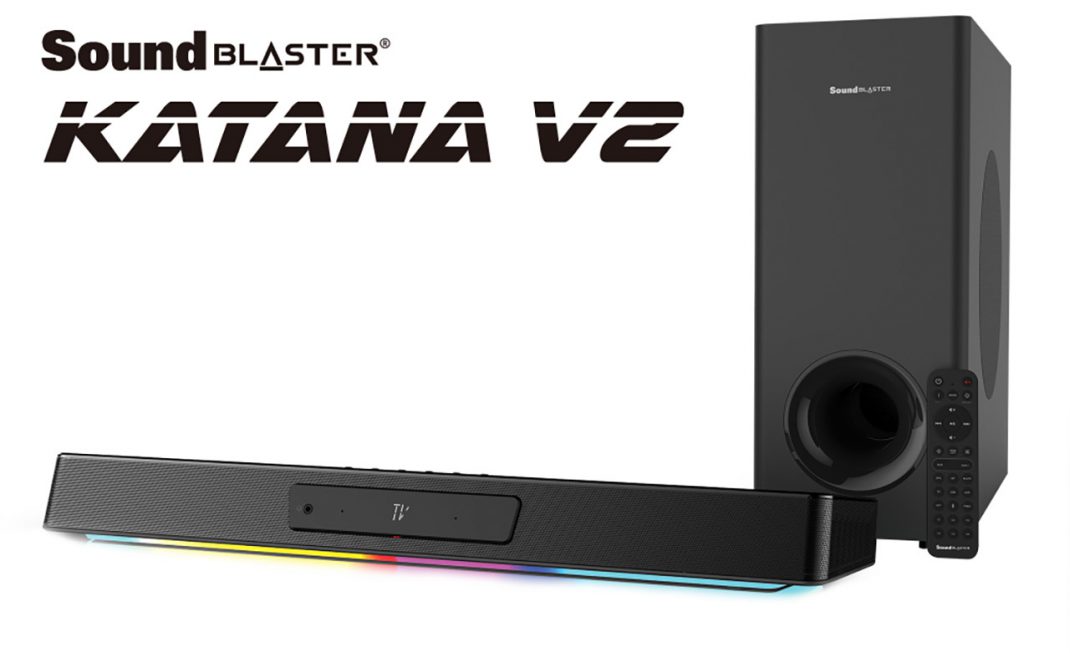 The Sound BlasterX Katana soundbar was one nice piece of kit for several years, bringing good quality, loud sound to dorm rooms, home offices, and game rooms the world over. Recently, Creative Labs released the next iteration of this low-cost, high-power soundbar, the Sound Blaster Katana V2. Notice they have dropped the gamer-focused “Sound BlasterX” moniker from its name, signaling that the Katana V2 isn’t just for gaming – its potential as a home theater soundbar as well as soundbar to play music from your computer or smartphone now fully-realized. At $329.99, a higher price point than its predecessor, will the Sound Blaster Katana V2 live up to its creator’s intentions as a multi-use soundbar? Read on to find out!

The Creative Labs Sound Blaster Katana V2 has a very similar form factor to its predecessor, with much less taper on its front edge on each side. It still has a gunmetal and black color scheme as well as its completely eye-catching RGB lighting display along the bottom perimeter of the soundbar. As someone who has used RGB-enabled peripherals for a long time, I was blown away by how bright and vibrant the Katana V2’s RGB LEDs were – it’s simply stunning. The information display which was located on the upper-side of the Sound BlasterX Katana now graces the Katana V2’s front size – a much more logical choice given its new focus and abilities. The Sound BlasterX Katana was mainly marketed for computer and console gamers in smaller room spaces. In those situations, you would probably have your head above the soundbar and could easily look down to see its display. With the move to being able to bring home theater, console, and PC gaming sound to life, moving the display to the front is wise as the soundbar will probably be farther away from the listener. The included remote control does an excellent job at controlling the soundbar, and even allows for adjusting the RGB lighting. 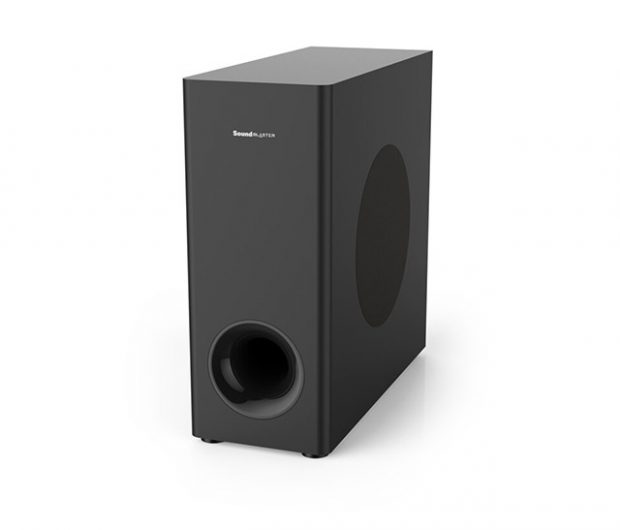 The Sound Blaster Katana V2 features a number of input options. On the back of the Katana V2 soundbar, you’ll find a USB-C port to connect a cable to your PC, an auxiliary 3.5mm jack, an optical cable input, Super X-Fi USB dongle port, and an HDMI ARC port. All that, in addition to a Bluetooth 5.0 connection makes the Katana V2 able to get sound from just about any source. In my setup, I first tried connecting the Sound Blaster Katana V2 to both my computer, my smartphone, and my Xbox One game console. Something interesting about the Katana V2 is that it acts as its own sound card and, when plugged into your computer, your machine will just use it as its sound output device. Under the hood, the Katana V2 features two 63mm mid tweeters, two 19mm tweeters, and one 165mm driver in the subwoofer unit. This is different than the Sound BlasterX Katana which had 2 63mm mid tweeters, two 34mm tweeters, and one 133mm drive in the subwoofer unit. The smaller low end tweeters on the Katana V2 is offset by its higher power output, which is rated at up to 126W RMS (252W Peak). This is a huge upgrade over the Sound BlasterX Katana’s up to 75W RMS (150W Peak) rating – and, the upgrade is highly noticeable. I am sure I brought a variety of noise complaints on myself as I blasted games from my Steam library across my neighborhood.

Sound Blaster has added some nifty features to the Katana V2, such as Super X-Fi, SXFI Battle Mode, Scout Mode, and the Sound Blaster Acoustic Engine – although, it should be noted that both SXFI Battle Mode and Scout Mode, and Super X-Fi are all designed for headset usage. Battle and Scout modes try to enhance the more informative noises that you may find in your favorite FPS game – noises like footsteps, reloading, etc. It’s meant to give the player an edge over their opponents and actually does work to varying degrees of success. 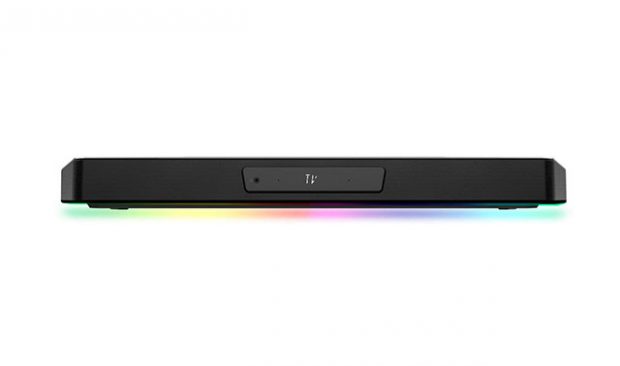 Super X-Fi is a headphone technology which is designed to give the listener the optimized audio holography experience. It is setup by downloading the Super X-Fi app on your smartphone and creating an account. The user then takes a picture of their ears and head to map a custom virtual sound profile. After connecting the app to the Katana V2, you are all set. Unfortunately, the setup usage of Super X-Fi is not all that user-friendly, and it is clunky to move around your music library through the Super X-Fi app. Additionally, the instructions tell the user to download the separate Creative Command App to have more direct control over the Katana V2. Again, there is a level of clumsy here which, while not impossible, makes for a less than user-friendly experience. Despite the clumsiness, it is functional, and you can control various aspects of the soundbar with the app. An additional wish for the Katana V3 is that it wasn’t so close to the surface it sets on. It doesn’t rely on any ground-effect sound, so it can afford to have some slightly taller rubber feet in the box. It’s so low to the desk now that, if you have a large monitor base it might touch against it and cause some rattling. I added some silicone feet from amazon on mine and it was perfect.

The second big test I had for the Katana V2 was using it as a home theater soundbar. So, I connected it to my Xbox One via the optical input. I loaded up a Blu-ray disc and began to see how this small soundbar would work in a moderately sized TV room. Fortunately, I was pleasantly surprised to find that it worked VERY well! It has built-in DOLBY audio decoding through the optical and HDMI ARC ports and the soundscape created by the Katana V2 is great. Of course, it’s not going to be as good as a much more expensive DOLBY Atmos unit or discrete surround sound system, but it’s pretty great. Coupled with the fact that both the soundbar and subwoofer units are very small and it is a veritable powerhouse of audio goodness.

Overall, the Sound Blaster Katana V2 soundbar is an excellent choice whether you need to bring your favorite computer game audio to life in your office or you want to push out some serious home theater sound from your Blu-ray player or gaming console. Its variety of uses and sound quality are well worth its $330 Dollar price point. The Katana V2 is available now. 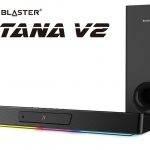