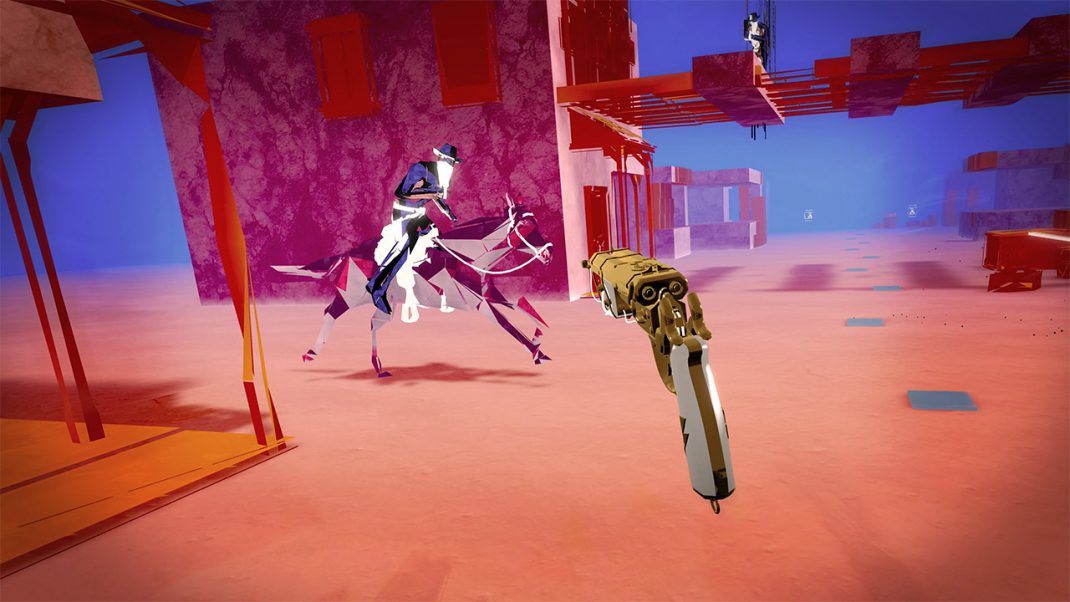 Cloudhead Games announced today that its critically acclaimed VR rhythm shooter Pistol Whip’s new Western-themed cinematic campaign, “Smoke & Thunder,” is launching on Oculus Quest, PCVR, and PlayStation VR on August 12th. As Pistol Whip’s most noteworthy update ever, “Smoke & Thunder” adds a ton of new content such as a new fully-voiced campaign set in the Wild West, a pulse-pounding star-studded soundtrack, and the game-changing “Styles” system sandbox for endless replayability. The new additions are a free update to existing Pistol Whip owners. New players can purchase the VR title for $24.99 until August 15. After that date, the new Pistol Whip price will be $29.99.

Cloudhead’s first cinematic campaign, “2089,” was a fast forward into the future; their second, “Smoke & Thunder,” is a badass blast to the past—with new weapons, mechanics, a dastardly new outlaw threat, and a mighty fine new boss fight for folks to tangle with.

Once players have conquered the campaign, they can skedaddle on over to Arcade and check out all the campaign scenes—from both ”Smoke & Thunder” as well as “2089”—unbridled for the very first time. In Arcade mode, players can use whatever weapon and modifier they want in endless combinations.

Pistol Whip’s new “Styles” system sandbox allows players to combine their preferred weapon type with up to five modifiers to create an unstoppable action experience that’s exactly what they want. After finding a preferred Style that’s uniquely their own, players can challenge friends or compete solo and be the first person to dominate the leaderboard uniquely generated for that “Style’s” choice.

New weapon types also burst onto the scene with the debut of Styles, including Brawler, which transforms the previous No Ammo modifier into a glorious new melee mode. 2089’s Burstfire and the new weapons from “Smoke & Thunder” are also available in all scenes with Styles.

These weapon additions and changes combined with four new modifiers mean the possibilities are endless. From green to grizzled and anywhere in-between, there’s a Style for everyone. Pistol Whip also includes an ever-changing list of recommendations such as Featured Styles, which contain weekly style choices curated by Cloudhead’s own team of developers and players. “Styles” can also be used with all past Pistol Whip updates like the aforementioned “2089” and “Heartbreaker.”

Since its launch, Pistol Whip has continued to see commercial success, remaining one of Quest and Steam’s top-selling VR games. Polygon included the game in its Top 50 games of the year, and Gamespot called it one of the Best VR Games of 2019. Pistol Whip also earned top industry recognition as a GDCA finalist and the winner of Immersive Reality Game of the Year at the 2020 DICE Awards.

Cloudhead is the veteran VR studio behind Pistol Whip and the fantasy adventure trilogy The Gallery, winner of over 30 awards and nominations including ‘VR Game of the Year’ in 2018. Before Pistol Whip, Cloudhead partnered with industry-legend Valve to create Aperture Hand Lab, a humorous tech demo set in the Portal Universe, for the next-gen Valve Index. Always innovating, Cloudhead Games is also known for its early solutions in VR locomotion/comfort with “Snap Turns” and “Teleportation,” as well as VR motion capture and hand interactions.