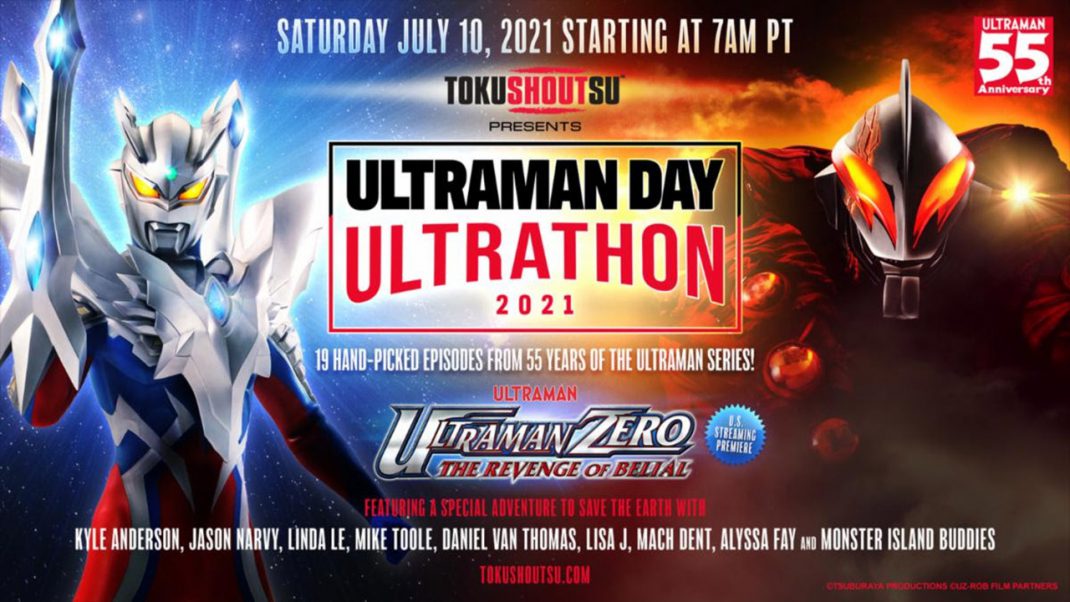 In celebration of the 55th anniversary of the landmark series Ultraman, Shout! Factory TV™ and its premier Tokusatsu channel TokuSHOUTsu™ will proudly present a full-day streaming event entitled Ultraman Day: Ultrathon on Saturday, July 10. The marathon – featuring 19 episodes that span 55 years of the Ultraman series – culminates in the U.S. streaming premiere of Ultraman Zero: The Revenge of Belial. The Ultrathon will stream across all Shout! Factory TV and TokuSHOUTsu platforms and feature one-of-a-kind fan engagement, including exclusive giveaways of top toys from Bluefin Brands and promotional support from Marvel Entertainment, Factory Entertainment, VIZ Media and RightStufAnime.com.

Ultrathon kicks off on Saturday, July 10th at 7 a.m. PT with 19 hand-picked episodes across 9 Ultraman series – Ultraman, Ultraseven, Return of Ultraman, Ultraman Ace, Ultraman Leo, Ultra Q, Ultraman X, Ultraman Orb, and Ultraman Ginga – alongside segments of the new special, as it leads up to the 5 p.m. PT U.S. streaming debut of Ultraman Zero: The Revenge of Belial as its grand finale.

Following Ultrathon, Ultraman Zero: The Revenge of Belial and In Search of Ultraman! The Invasion from Another Space! will join the catalog of Ultraman content also available for streaming on demand across Shout! Factory TV platforms, on ShoutFactoryTV.com; Shout! Factory TV’s Amazon Fire TV, Android, Apple TV, and Roku apps; and on various Shout! Factory TV branded channels including Tubi, Amazon Prime Channels, and the Roku Channel.

Shout! Factory has licensed a number of Ultraman titles (produced by the innovative team at Tsuburaya Productions Co., Ltd) through its relationship with both Mill Creek Entertainment and the Ultraman worldwide distributor (excluding Asia), Indigo Entertainment Ltd.

Ultraman Zero: The Revenge Of Belial Synopsis
Ultraman Zero, the rookie Ultraman from Tsuburaya’s 2009 theatrical movie returns, fully-fledged. However, he is confronted with the empowered Kaiser Belial, back from the evil Ultraman Belial whom he and other Ultra warriors battled so fiercely in Nebula M78. Can Ultraman Zero live up to the expectations of his legendary father Ultraseven?