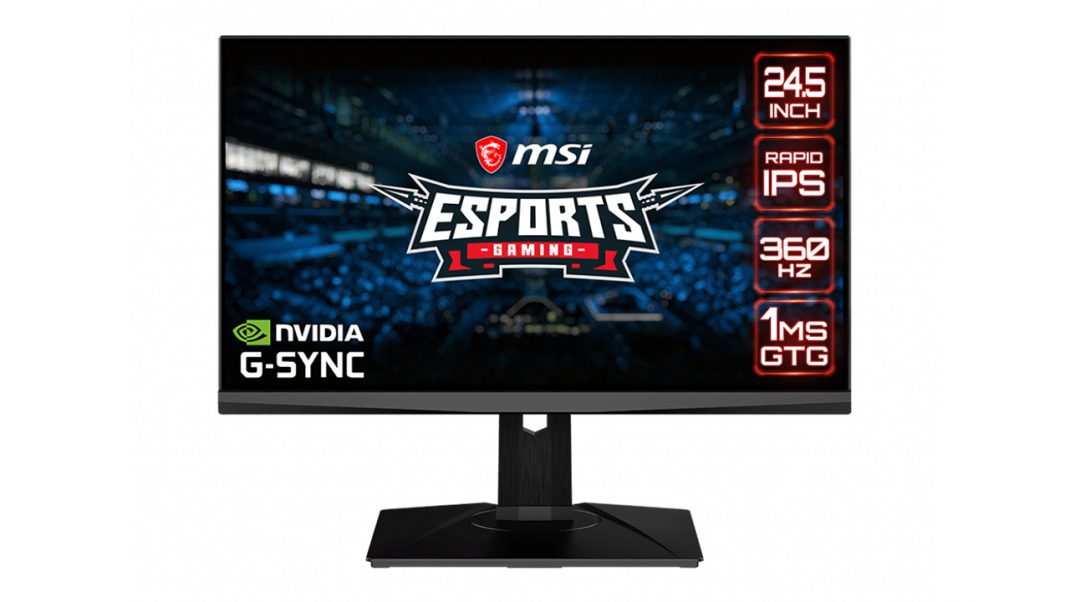 The announcement follows MSI’s Esports Gaming logo obtaining trademark certification earlier this month. MSI stands by the principles of innovation in design and technology, and the overall pursuit of excellence.

On the other hand, the Esports Gaming Series focuses on meeting the needs of players who are desperately eager to win. It uses the exact specifications of monitors used in esports with an extremely fast response time, high refresh rate and tear-free image processing. For serious gamers who know exactly what they need, or fans of high FPS games, the Esports Gaming Series will be their partner on the road to victory.

In 2020, NVIDIA launched the latest GPU: the Geforce RTX 30 series. The performance of the RTX 30 series GPUs is up to 2X higher than previous-generation GPUs, and the DLSS technology further boosts the FPS rate. To fully utilize the GPU’s performance and enjoy the smoothest gaming experience, users need a powerful gaming monitor.

MSI is proud to officially announce the fastest esports gaming monitor in the world: the Oculux NXG253R. The 24.5″ 1080p monitor is equipped with a groundbreaking 360Hz high refresh rate and 1ms GTG response time Rapid IPS panel. The Oculux NXG253R ensures that players will always be at peak performance while gaming. Powered by NVIDIA G-SYNC, the Oculux NXG253R supports exclusive features like Variable Refresh Rate (VRR) from 0 to 360 Hz, the fastest ULMB mode that supports up to 240Hz, and brand new Reflex Latency Analyzer that captures end-to-end system latency.

With a focus on consistently producing superior products for gamers, MSI will keep challenging itself in the design and performance of its gaming monitors.

Oculux NXG253R supports NVIDIA G-SYNC and VRR (Variable Refresh Rate) technology. Experience the lowest system latency from 1 to 360Hz for faster reaction times, practically no ghosting, and the smoothest motion to help stay on target. Add in zero tearing with G-SYNC, and it’s clear why Oculux NXG253R is destined to win.

Like a standard IPS, Rapid IPS display produces no image distortion and minimum color shifts when viewed from different angles. The liquid crystal molecules of Rapid IPS rotate at a speed that is up to 4x faster than normal ones, therefore the response time is shortened to 1ms GTG and can eliminate monitor blur.

The 360Hz display powered by NVIDIA G-SYNC is 1.5X faster than conventional 240HZ displays and takes full advantage of ultra-high frame rates in today’s biggest game titles such as VALORANT, Fortnite, CS: GO, Rainbow Six Siege, Overwatch and Apex Legends. Visualize and experience the extremely fluid gameplay with no latency to ensure the most precise targeting.

Enjoy the ultra-fast response time of impulse displays in inherently slower ‘hold’-type LCD displays for moving objects that are silky-smooth and crystal-clear. Reach out your hand and grasp a bullet in motion.