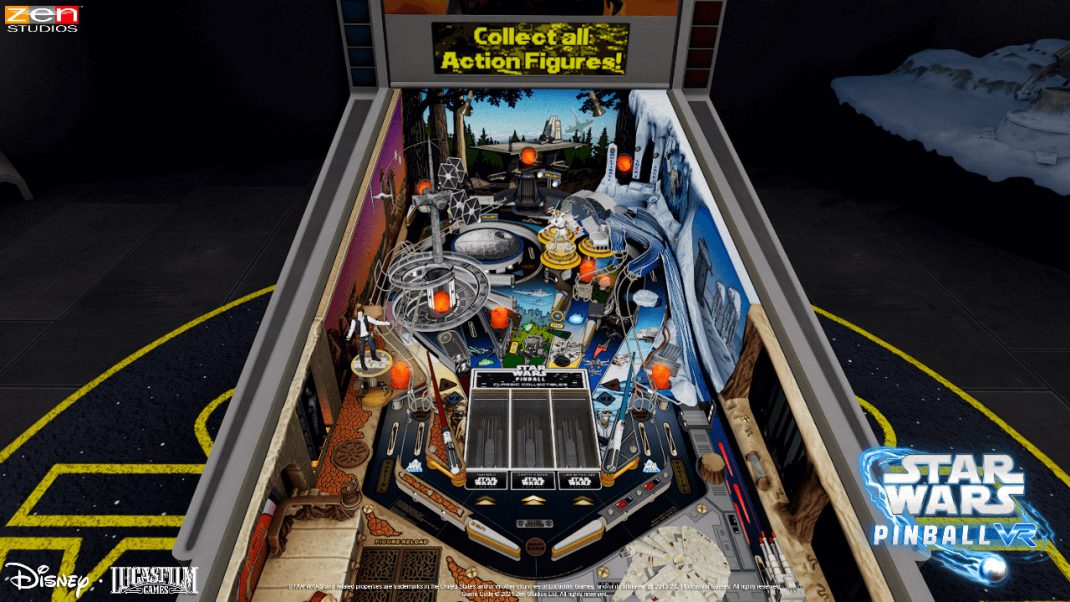 As seen today on The Pinball Show, Zen Studios has announced that Star Wars™ Pinball tables are finally coming to virtual reality for the first time ever. Star Wars™ Pinball VR will release on the original Oculus Quest, Oculus Quest 2, Steam VR, and PlayStation® VR on April 29, 2021. The game’s reveal trailer is a heartfelt homage to the classic theatrical preview for the 1997 Star Wars Special Editions.

Star Wars Pinball VR will launch with eight amazing tables. The Mandalorian and Star Wars Classic Collectibles – two tables never before released – will be joined by six remastered favorites, including Star Wars: A New Hope, Star Wars: The Empire Strikes Back, Star Wars: Return of the Jedi, Rogue One: A Star Wars Story, Star Wars Rebels, and Masters of the Force.

Beyond the incredible realism added by VR, Star Wars Pinball VR upgrades the core Star Wars Pinball experience with new features exclusive to this release. The “Fan Cave” is the new home for both your pinball table and the customizable array of Star Wars lightsabers, blasters, helmets and more you’ll earn while playing. Place an action figure on the pinball table and the room comes to life – not only with a new table to play, but with life-sized characters and vehicles joining you on either side. Total Immersion mode lets you experience everything at table level, standing you side-by-side with your favorite characters. And full 360-degree mini-games surround you with iconic Star Wars set pieces like the speeder bike chase on Endor, the Bespin carbon-freezing chamber duel, and more.

“Zen Studios has had great success bringing Pinball FX digital tables to VR, and we couldn’t be happier to finally have Star Wars enter the mix,” says Mel Kirk, Chief Operating Officer at Zen Studios. “It really does feel like you’re playing an actual pinball machine right in front of you! Star Wars Pinball VR is built to be expanded upon, too – no announcements just yet, but we’re hoping to keep the blast doors open for new DLC in the future.”