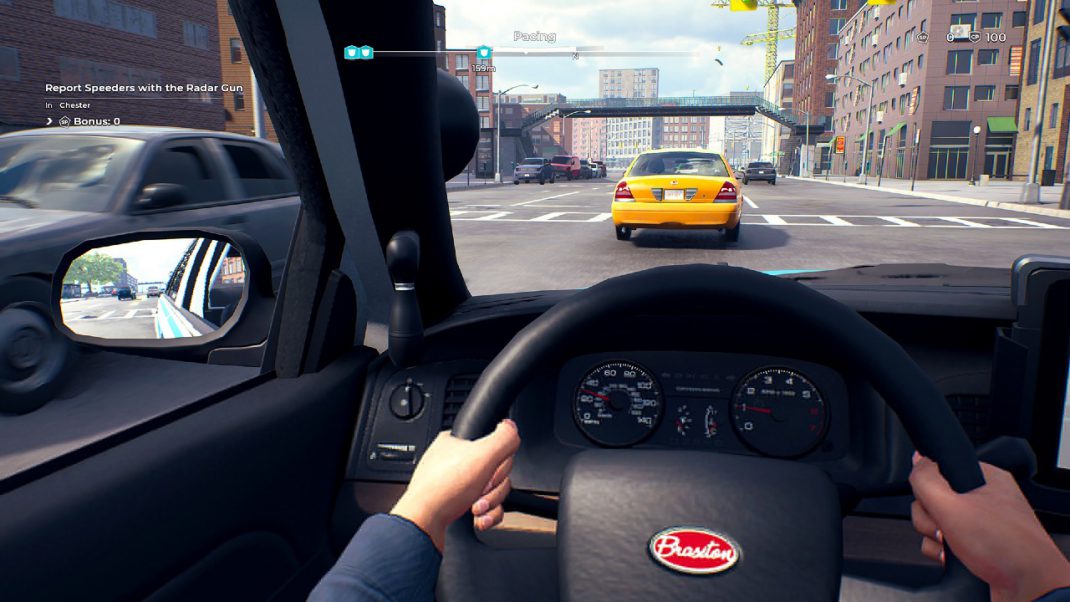 Munich-based studio Aesir Interactive and publisher astragon Entertainment have announced that the authentic POLICE SIMULATOR: PATROL OFFICERS will launch as a Steam Early Access title this Spring. Handcuffs and radar on hand, players will don the badge of a male or female United States police officer and patrol the first district and five neighborhoods of a bustling American city in this first playable version of the game. Supported by a game development grant from the German FilmFernsehFonds Bayern funding body, the title will retail for 19.99 Euro/USD 24.99/17.99 GBP (RSP).

After POLICE SIMULATOR: PATROL OFFICERS launches as an early access game this Spring, it will improve through monthly updates that incorporate valuable feedback from players and police fans.The game will paint a realistic picture of a patrol officer’s job in a fictional American city called Brighton. Police fans will wear their virtual badges proudly as they ensure order and safety. Players will be able to patrol the first neighborhood of the introductory city district at launch. If they perform well with their superiors, they’ll unlock access to four more neighborhoods in this first district, where pedestrians and vehicular traffic simulate the impression of a living complex metropolis.

Police fans will begin their careers by choosing one of eight different playable characters. Instead of a lengthy tutorial, a system of unlockable content will teach players all the skills they need while on patrol. Handy tool tips will provide additional information.

Collecting shift-points during the workday, which in turn become duty stars, will unlock new districts, new neighborhoods, and new police cars. During shifts, tasks will include enforcing parking regulations, recording traffic accidents, and penalizing traffic offenses like speeding or jaywalking. On top of that, players will have to keep an eye out for wanted suspects.

Appropriate and lawful behavior towards Brighton’s citizens is an integral part of POLICE SIMULATOR: PATROL OFFICERS. A Conduct Point System will log and penalize abuses of power. Virtual police officers who are found to have acted against the law and the department’s code of conduct will be stripped of their badges and fired.

The title also will include a casual game mode where players will be able to receive hints they wouldn’t normally receive in the main simulation portion of the game. Players will receive tips on crimes occurring in their immediate vicinity. Additionally, they’ll be shown more leniency when it comes to breaking the law, such as speeding or jaywalking. Serious offences like police brutality, however, will still be severely punished. Players will also be able to disable police vehicle collisions with NPCs while in this mode.

The Crime Map will help fans maintain an overview of the different districts and neighborhoods of Brighton. Players will be able to monitor increases in offences in order to determine which areas demand a stronger police presence.

Following the game’s initial early access period, fans can look forward to new features like a cooperative multiplayer mode as updates roll out.