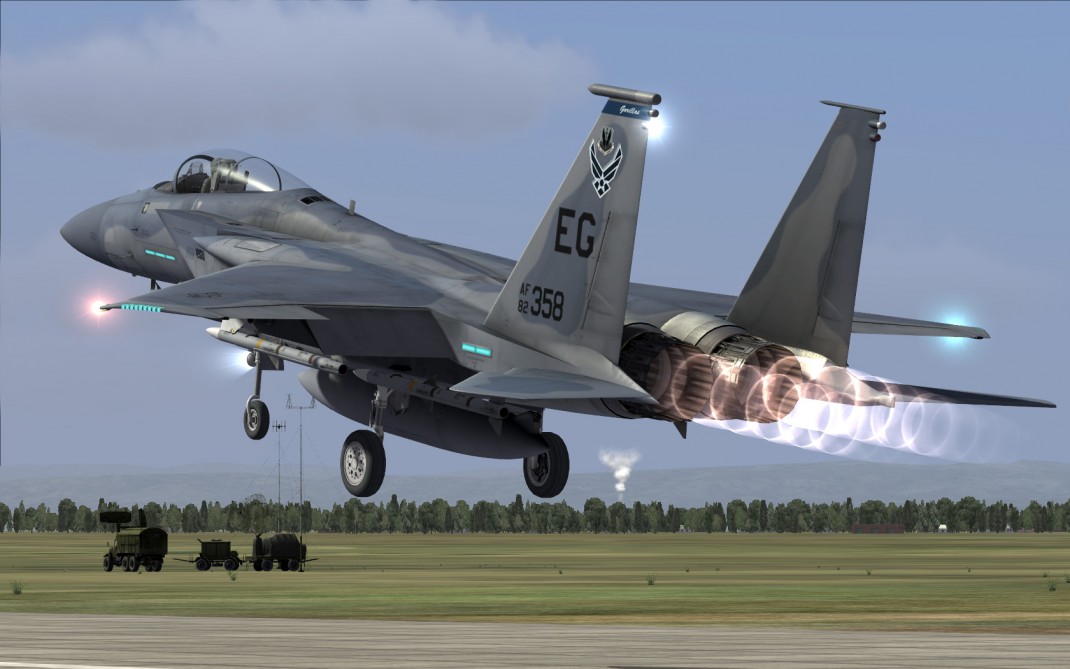 The folks at Eagle Dynamics have put out an announcement touting some of the new third party campaigns that have just been released for their outstanding combat flight simulation, DCS: World. Here are the six campaigns worth looking into:

Dave ‘Bio’ Baranek joined the US Navy in 1979 and enjoyed a successful 20-year career amassing almost 3,000 F-14 Tomcat and F-5F Tiger hours. He completed the legendary “TOPGUN” fighter tactics and weapons training program, and later he returned as an instructor. He has teamed up with Reflected Simulations to give DCS players a taste of air combat manoeuvring training in the 1980s with a digital syllabus that enabling players to experience what it was like to be up there and train with the best. Light the cans, shove it into Zone 5, and let Bio himself walk you through the action. Recorders on, fight’s on!

Key Features of the Campaign:

In this Harrier campaign, you are assigned the role of a US marine corps pilot, in which you fly the AV-8B NA Harrier attack aircraft.

Storyline: You will participate in the liberation of Georgia. Not admitting defeat in the Georgia presidential election, a retired general and his army of mercenaries and military rebels have seized part of the country’s territory. The morale of the government troops is broken. Illegal gangs are rampaging in the occupied territories. After receiving a request for help in restoring constitutional order in the country from the elected President of Georgia, NATO has agreed to send the USN frigate “Oliver Perry” and the universal landing ship “Tarawa” to help.

Operation Pontus is a story driven campaign for the F/A-18C Hornet. As the Commanding Officer of VFA-131 “Wildcats”, you will plan, design, and execute demanding missions for your squadron. This campaign has day and night missions with different weather conditions against an intelligent and adaptive enemy.

“Every decision counts… Start’ em Up!”

Black Sea Resolve ‘79 is a story-driven campaign that will test your F-5E Tiger II A/A and A/G skills in a variety of missions to support the independence movements of several former Soviet Unition states.

It is the 1st of March 1979. Your F-5E squadron is being deployed to Krasnodar to support the UN resolution for the Independence of the former Soviet Union provinces. In a rather moderate response, US president Jimmy Carter and the other NATO countries are deploying a force consisting of elements from 9th Infantry Division, 6th Cavalry Air Brigade and a MAU from 1st Marine Division. USAF is preparing 3 squadrons of F5-E and 2 squadrons of F4-E to provide air support.

Take-off from Nellis AFB, Nevada in F-16C Viper and fly against modern Chinese adversaries such as the J-11A in a realistic Red Flag A/A and A/G campaign.

The Red Flag 21-1 Campaign is the result of painstaking research on the conduct of modern Large Force Exercises (LFE). Scenarios, procedures, target sites and threats are based on those used in the real Red Flag. Take flight from Nellis AFB, Nevada in an F-16C Viper to test your mettle against modern Chinese hardware in a realistic combat training setting. Face off against the Chinese J-11A Flanker in a special one versus one Basic Fighter Manoeuvres (BFM) scenario. These 10 missions will put you up against to some of the best military hardware in the world, operated in the most realistic environment possible in a flight simulation.

The Rising Squall campaign is driven by an intricate storyline and represents an intense fantasy conflict that takes place in N.E 053 in the INVERTED world.

Rising Squall is a campaign driven by an intricate storyline and intense conflict. While striving for a smooth learning curve for beginners, with missions that progressively become more difficult, the campaign pays heavy attention to the gameplay atmosphere and experience, with pro voice-actors & background music respectively, complementing them.

The discovery of “Chunium-500” seemed to be a solution to the energy crisis. But it has also become an uncertainty that has again intensified the competition between nations.