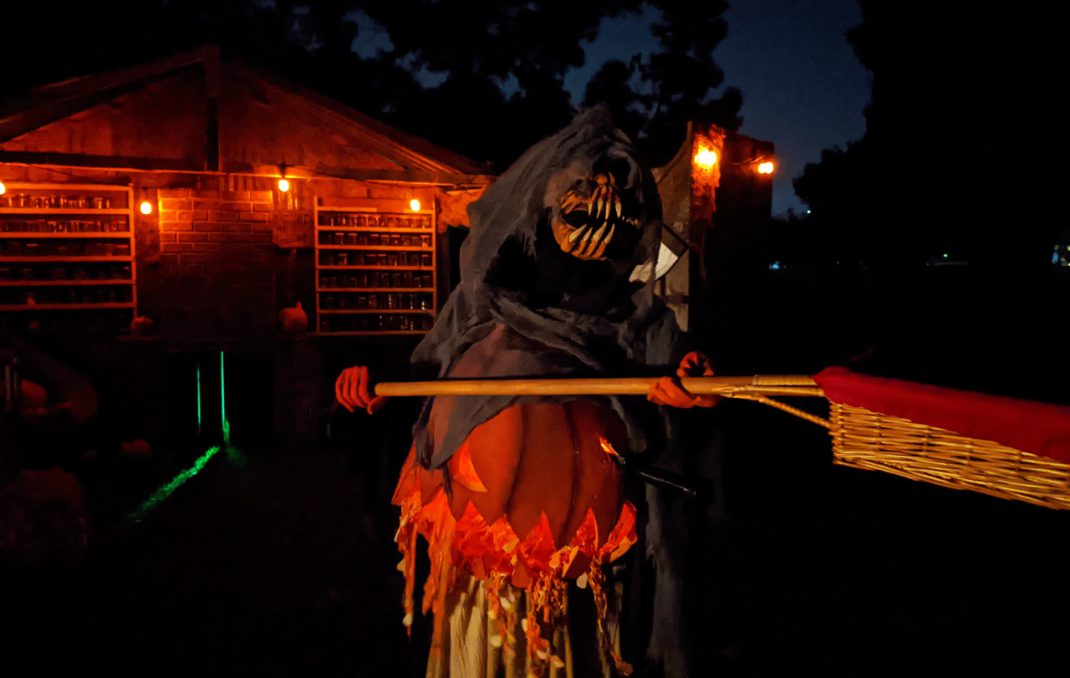 What do you get when you couple the former Creative Director of the LA Haunted Hayride, the creators of the R Rated Speakeasy, and a Halloween season filled with talk of pandemic? You get The Bite LA – a Halloween drive-thru food crawl and haunt. In a year where haunted attractions are largely shuttered in Southern California, we couldn’t help but drive out to Legg Lake in Los Angeles County to check out the spooky fun.

Arriving at the Legg Lake location, we drove around the windy road leading to the main event parking lot. There, we hit a long line of vehicles waiting to get inside. The wait took about 45 minutes – our ticket time was 9PM but we arrived at 8PM. The 45 minutes went by very quickly though as the group I brought in the vehicle played Halloween music, chatted about haunted attractions past, and ruminating on next year’s (hopefully) COVID-free Halloween season. 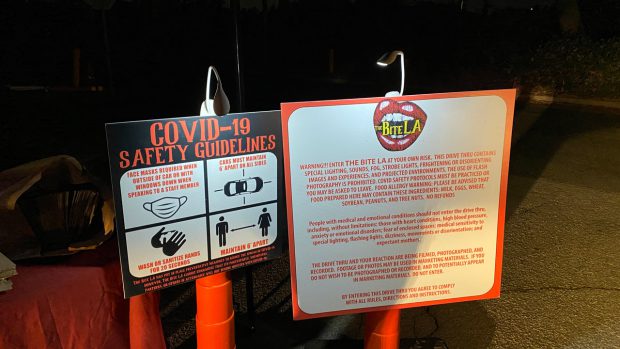 We were greeted at the gate and handed menus to look at and select the kind of meal we wanted. They have standard, vegan, vegetarian, and gluten-free options. We selected our choices and were told to follow a path to the next station where we would get food trays and flatware. On we drove to the next station and we were very impressed by how smoothly the whole process was. After getting the trays and place settings (all individually-wrapped) we drove to the security stop. There we were briefed on how to navigate the Creature Safari and food crawl after. The speed limit on the safari is 3MPH – also, they ask you to turn off your headlights. Guests are encouraged to use flashlights to spot the creatures, so be sure to bring some! Then, we proceeded down the safari path…

The Bite LA’s Creature Safari is outstanding. You will drive along the dark paths (outlined by LED torches), looking for monsters and creatures that inhabit the area around Legg Lake. I held my flashlight out the window and braced it on the frame. Slowly, we crept along the path and kept an eye out for creepy crawlies. We sure did see them! The Bite LA has done an outstanding job with its monster costumes and creatures. The low light helps sell the effects (while you should bring a flashlight, the experience is most effective if it’s a low to mild intensity model) and the scareactors portraying the creatures do a great job at faux-charging the vehicles or making Sasquatch-like pop outs through the foliage. The soundtrack for The Bite LA’s Creature Safari is provided via radio station. Once tuned to the assigned station, your car will be swirling with eerie sounds and ambiance to enhance the ride.

Once we made it through the safari, we were stopped a station that explained the rules for the food crawl portion of the event. We were also assigned another radio station that provided soundtrack to the food crawl. Thankfully, the food crawl portion of The Bite LA is just as entertaining as the Creature Safari. You drive from food station to food station while impressive monsters serve you tasting portions based on your menu via a long reach bucket system. You get some good (yet socially-distant) face time with the monsters here and really get to appreciate the work that went into their costumes and masks. Don’t forget to wish them each a “Happy Halloween!”. 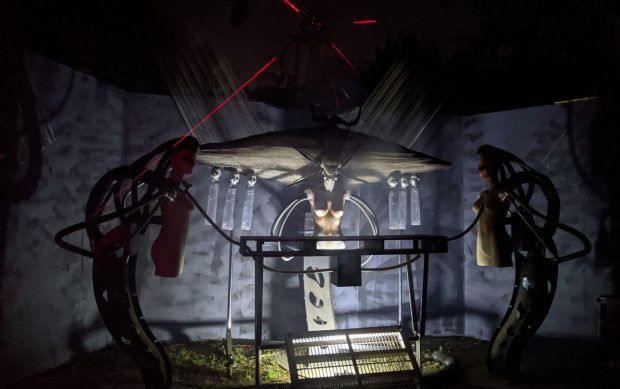 Finally, we reached the virtual campfire location, which features a projected virtual camp fire with pre-recorded video segments. We were told to tune our radios to the station for that portion of the experience and enjoy the show while we ate our food. We found a nice spot up close to the screen and began eating. Even with the food being a bit cooled off due to the length of time it takes getting through the food crawl, it was all very tasty – at least as tasty as the tastings at some theme park events right now. I am not sure which business is responsible for making the food at The Bite LA, but they should be commended. The hot apple cider I chose (you can pick between hot cocoa or cider) helps top off the meal and the ghost stories being displayed on the screen were genuinely creepy.

The Bite LA is an outstanding haunted attraction – especially in a year with a global pandemic. I hope the event comes back next year even bigger if COVID has been wiped out. They have a winning formula with this event and, so long as you’re a little patient at the start in line, you’ll have fun. The Bite LA event info and tickets can be found at their official website. 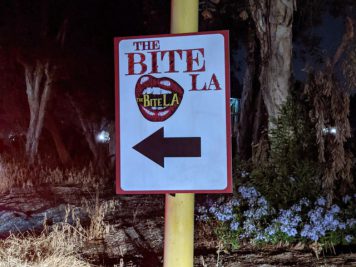 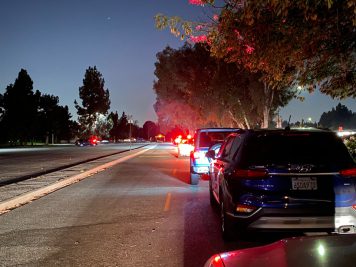 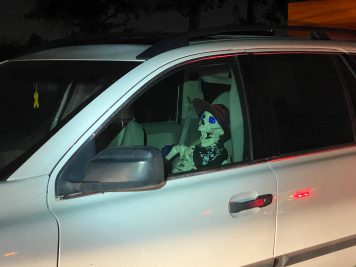 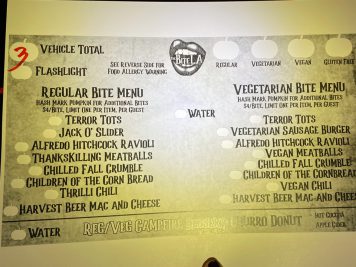 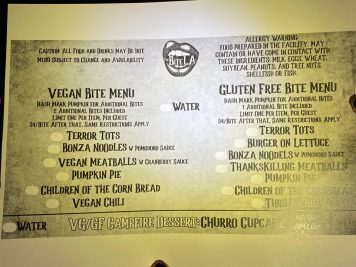 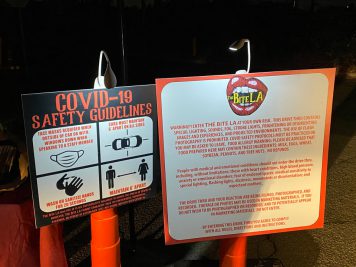 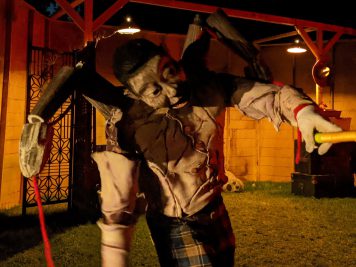 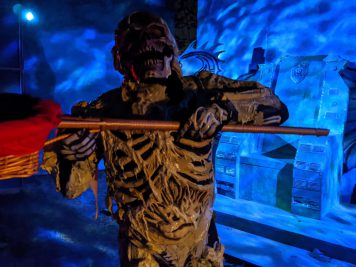 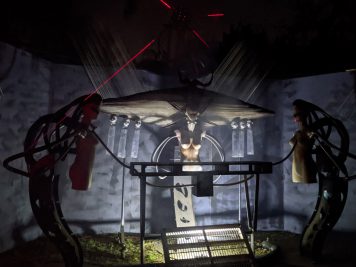 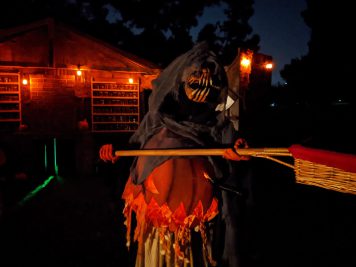 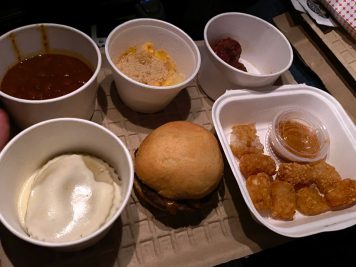