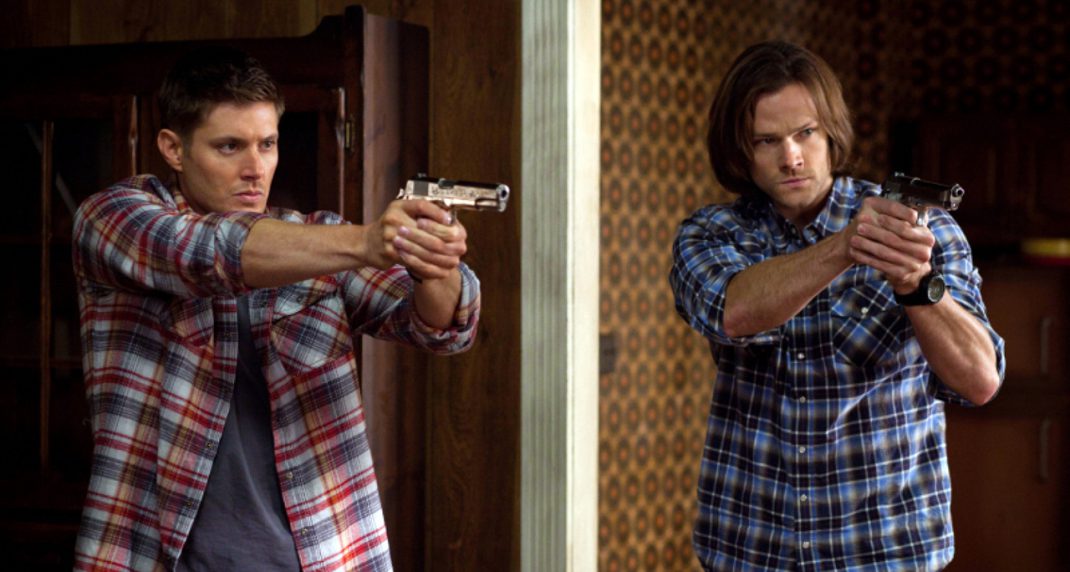 WarnerMedia comes together to celebrate the final season of The CW and Warner Bros. Television’s Supernatural with two special marathons on TNT.

On October 6-8, TNT will air the first 13 episodes of Season 15, providing fans with the opportunity to catch up on the final season.

Additionally, on November 19 from 5:00am to 8:00pm ET/PT, TNT will host a 15-hour Supernatural marathon as a countdown to the two-hour series finale event, airing later that evening on The CW. This “best of” marathon will include one episode from each season along with interstitials featuring unique behind-the-scenes clips and anecdotes from the cast.

TNT’s Supernatural marathons include the following dates, times and episodes:

1:00 PM ET/PT – Back to the Future
Picking up where we left off last season, Sam, Dean and Castiel are left to defend the world after all the souls in Hell have been released and are now back on Earth and free to kill again.

2:00 PM ET/PT – Raising Hell
Sam, Dean and Castiel call on Rowena to help keep the evil souls at bay, and get an unexpected assist from Ketch.

3:00 PM ET/PT – The Rupture
Together with Rowena, Sam and Dean work tirelessly to keep all of hell from breaking loose. Meanwhile, Castiel cannot forgive an arrogant betrayal.

WEDNESDAY, OCTOBER 7
10:00 AM ET/PT – Atomic Monsters
Sam and Dean investigate the mysterious death of a girl and the disappearance of another. Series star JENSEN ACKLES directed the episode.

11:00 AM ET/PT – Proverbs 17.3
Sam and Dean’s routine case turns out to be anything but. Recurring guest star RICHARD SPEIGHT, JR. directed the episode.

12:00 PM ET/PT – Golden Time
While Castiel investigates the disappearance of a local teen, Sam and Dean are visited by an old friend.

1:00 PM ET/PT – Last Call
Dean goes off on his own to take on a case. Meanwhile, Castiel has an idea of how he can help Sam track down God.

2:00 PM ET/PT – Our Father, Who Aren’t in Heaven
Sam, Dean and Castiel’s continued search for a way to defeat Chuck leads them to unexpected places and toward unlikely allies

10:00 AM ET/PT – The Trap
While Sam and Eileen face the brutal truth, Dean and Cas work together to get a step ahead of Chuck.

11:00 AM ET/PT – The Heroes’ Journey
Sam and Dean hit the road to help an old friend, but it appears that their luck may have finally run out when they are the ones who may be in need of rescue.

12:00 PM ET/PT – The Gamblers
Sam and Dean press their luck in a winner-takes-all game of pool. Meanwhile, Castiel hunts down a would-be murderer, but not for reasons one might think.

1:00 PM ET/PT – Galaxy Brain
Sam and Dean respond to a frantic call and – together with Castiel, Jack and Sheriff Jody Mills- assist in an extraordinary and heartbreaking rescue. Then, Billie surprises everyone with a visit to the bunker.

2:00 PM ET/PT – Destiny’s Child
A search for the one thing that may give the Winchesters an edge against God leads Sam and Dean to Jo’s door and to a secret that may have died with Ruby. Meanwhile, Castiel asks Jack to do the unthinkable to help the brothers in their quest.

5:00 AM ET/PT – Pilot (Season 1)
Sam is about to graduate from college and has an interview set up to join one of the most prestigious law schools in the country. His brother Dean, whom he has not seen since he went to college, shows up in the middle of the night and tells him their father is missing while on a hunting trip. Leaving his girlfriend behind to find their dad, Sam joins Dean in an effort to find their father in a little town called Jericho, where unmarried men disappear without a trace.

6:00 AM ET/PT – All Hell Breaks Loose Pt. 2 (Season 2)
After the fight between Jake and Sam, Dean has to make the ultimate sacrifice for his brother. Meanwhile the Yellow-Eyed Demon has his new servant and plans to unleash the hordes of Hell.

7:00 AM ET/PT – Mystery Spot (Season 3)
Dean is killed after looking into a case about the disappearance of a man with Sam. The next morning, Sam is shocked to find Dean alive and is hit with the realization he is reliving the day before.

8:00 AM ET/PT – Lazarus Rising (Season 4)
Bobby, Sam, and Dean visit an old friend of Bobby’s, a psychic, to help them get some answers as to how and why Dean has returned from Hell.

9:00 AM ET/PT – Swan Song (Season 5)
The Apocalypse forces Sam and Dean to make heart-shattering decisions that will alter their lives forever.

10:00 AM ET/PT – The French Mistake (Season 6)
Sam and Dean are transported to an alternate universe, where they are actors on a TV show called Supernatural and are named Jared Padalecki and Jense Ackles, and they must avoid an angelic hit man who is pursuing them.

11:00 AM ET/PT – Death’s Door (Season 7)
As Sam and Dean race the clock on a high-stakes mission, Bobby seeks the help of an unlikely old friend to solve one of the most personal cases of his life.

12:00 PM ET/PT – Sacrifice (Season 8)
With Crowley poised to undo everything they’ve ever done, Sam and Dean find themselves cornered. But with Kevin’s help, the Winchesters have one last play against The King of Hell. Meanwhile, Metatron gets Castiel to help him take on Naomi.

1:00 PM ET/PT – Do You Believe in Miracles (Season 9)
Dean is feeling the effects of the First Blade. Meanwhile, Metatron makes his move against humanity, as Sam, Dean and Castiel try to stop him.

2:00 PM ET/PT – Fan Fiction (Season 10)
Sam and Dean investigate the disappearance of a teacher and are stunned to learn that the victim’s school is putting on a musical based on their lives. The 200th episode of the series.

3:00 PM ET/PT – Baby (Season 11)
Seen entirely from the point of view of the Impala, Sam and Dean go on a road trip to fight monsters and demons.

4:00 PM ET/PT – Who We Are (Season 12)
Sam and Dean get caught in a dangerous situation and only have each other to rely on. The fight between the American Hunters and the British Hunters comes to a head.

5:00 PM ET/PT – Scoobynatural (Season 13)
Sam, Dean and Castiel are transported into the animated world of Scooby Doo; and they join forces with the Scooby gang to solve a ghostly mystery.

6:00 PM ET/PT – Lebanon (Season 14)
Sam and Dean look to occult lore for a solution to their latest problem, but instead of a resolution, they find much more than either of them had anticipated. This is the series 300th episode.