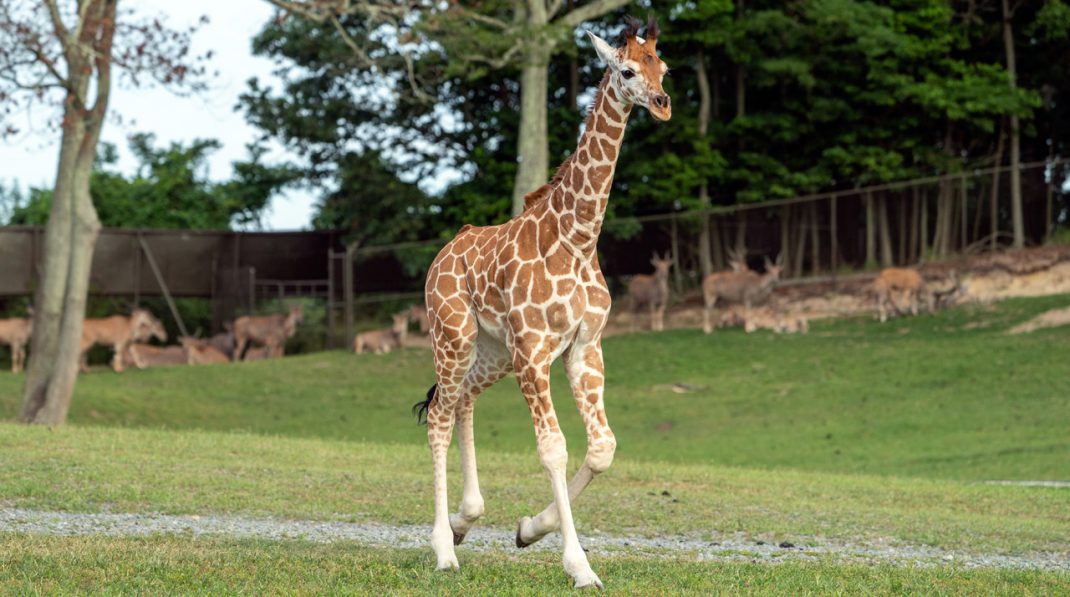 The Six Flags Wild Safari’s animal care team is celebrating the birth of a female giraffe, the most recent of four calves born in the span of one year. The calf, named “Sierra,” was born on June 2, 2020 and recently ventured into the Wilde Plains section of the safari for the first time. Led by her mother, Muraya, she joined the other young giraffes in this “baby boom”—Phyllis, Embu, and Soda—and encountered 10 different species of African animals, including white bearded gnu (also known as blue wildebeest), eland, and blackbuck.

“Sierra is over 200 pounds and will likely grow to be 1,500 pounds,” said Safari Veterinarian Dr. Ken Keiffer. “She is the latest in an exciting string of giraffe births here at the safari, and we are thrilled that all four calves are being raised by their mothers,” he added.

Though calves are typically about six feet tall when they are born, adult male giraffes can reach 18 feet, making them the tallest mammals in the world.

The calves are all reticulated giraffe, also called Somali giraffe, which are native to northeastern Kenya, southern Ethiopia, and Somalia.

“Reticulated giraffes have distinctive coat patterns featuring red-brown patches divided by thin white lines. Their spots are unique like a fingerprint, which is how we can tell them apart,” said Dr. Keiffer. Other facts about reticulated giraffes include:

In the wild, giraffes are currently undergoing what is referred to as a “silent extinction event.” Their numbers have decreased by nearly 40 percent in the past 30 years, placing them in the “Vulnerable to Extinction” category as determined by the International Union for Conservation of Nature (IUCN). The Six Flags Wild Safari is home to 12 giraffes.

The Wild Safari Drive-Thru Adventure takes guests on a self-guided journey through 1,200 exotic animals from six continents from the safety and privacy of their own vehicles. Guests must purchase tickets and make a reservation in advance of their visit using Six Flags’ new online registration system. A new, free audio tour is available to stream online that provides fun facts about 70 different species of animals at the safari. Guests can learn more about the animals and their habitats, purchase tickets, make reservations, and stream the audio tour at www.sixflags.com/safari.

Fun Facts About How Giraffes Measure Up: