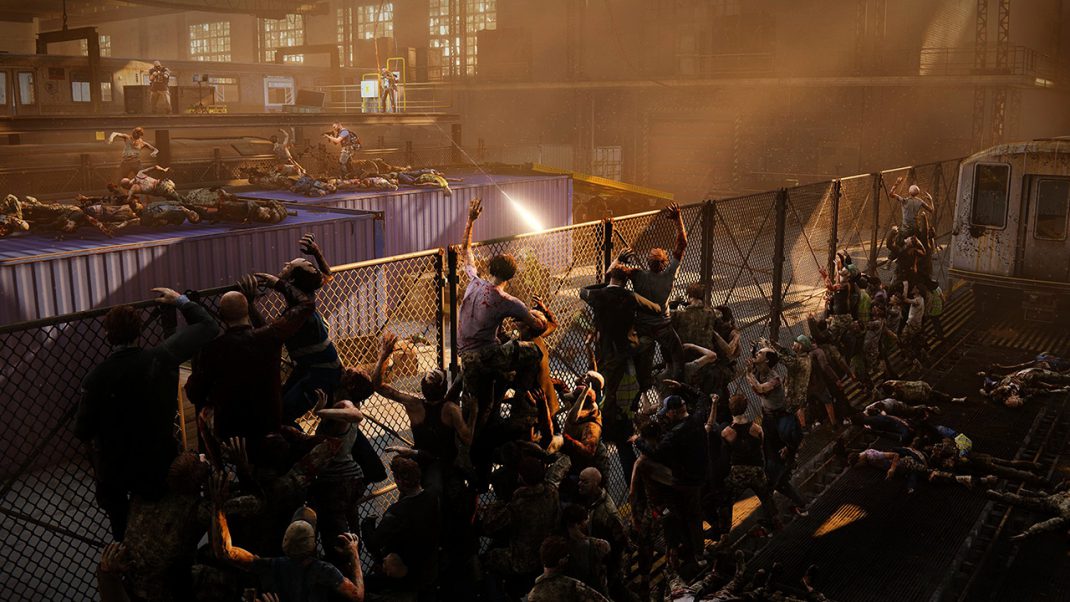 I don’t know a gamer that doesn’t have fond memories of Left 4 Dead. An incredible, intense game that gave up hours of incredibly fun gameplay and camaraderie. Thankfully, like its predecessor, World War Z Game of the Year Edition definitely has that magic, as long as your teammates are live human beings as opposed to the dreaded AI intelligence that comes with the single-player experience…

World War Z Game of the Year Edition, first off, is a great looking game. The music, sounds, and graphics all look and feel fresh and the world looks lived in, or died in depending on how you look at it. There’s a ton of characters to choose from, all with individual skills and specialties. As well, there’s a decent amount of customizable options for reskinning your character’s looks.

The world itself is definitely solid looking and the multitude of locations from around the world, as well as the variances of each location’s missions like being out in the city, inside a traffic tunnel, or wandering the wilderness. Though there are a few non-linear paths you can take during each mission, the levels keep you on a pre-determined path with little to drive you to explore down each alley knowing that no matter what, you’re going to end up in the right place without having to double back. There’s little reason to go exploring though so it doesn’t matter which paths you take, they’ll still have the same ammo boxes, weapons, and first aid along the way. 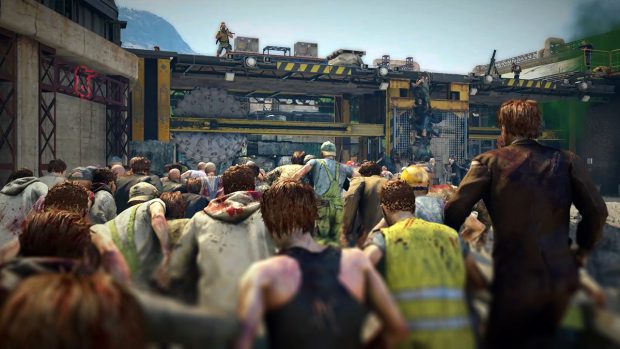 Speaking of weapons, one of World War Z Game of the Year Edition’s weakest points is the absolute vanilla variety of weapons. Granted, World War Z Game of the Year Edition has a much more serious tone. The music is dark and intense, the characters speak with urgency, and the setting really gives you a sense that “this could really happen” so the lack of weapon customization or any sort of armament that makes you feel like you picked up something better than you were already carrying is lacking. Only a couple weapons are definitely worth picking up if you come across them (like the crossbow) but with so many ammo boxes along the way, there’s really no reason to pick up something new once you get used to a weapon you like.

The “special” zombies as well definitely lack imagination and more often than not feel like they actually belong in a different, more campy zombie shooter. Some don’t even make any sense like zombies wearing suicide vests or undead in construction outfits who have a megaphone wrapped up around them and they “scream” into said megaphone, attracting more zombies to your location. The tacked on feel of the more aggressive zombies like these kind of takes you out of the serious tone World War Z Game of the Year Edition tries to convey and makes you wonder why a little extra time wasn’t put into these guys to make them more special to World War Z Game of the Year Edition as opposed to ones you’d see in any generic undead title.

The real experience of World War Z Game of the Year Edition relies on the actual co-op of the four person team. Playing online with a team that communicates is always going to be easier than jumping into a co-op of three AI players but World War Z Game of the Year Edition almost makes it dismal to play the game on your own. Being that zombies can literally come from all sides, the AI doesn’t warn you where you’re being attacked from so while you’re making your way forward to an objective, your entire team may stop and open a fire fight with zombies approaching from behind. Unfortunately none of the AI actually communicates where you’re being attacked from or that you’re even being attacked at all. As well, the AI has different names for the special zombies so starting out, you may have a difficult time learning and honing in on what zombies have special abilities and their particular names because while the AI does refer to some by their given name in the game (for instance, the Bull), they will never refer to others by their actual title (like always calling the Gasbag zombies “Hazmats”). That can be a bit frustrating early on when you’re still learning the ropes and have your head on a swivel because the AI seems to be mute when they’ve got a zombie on their back. 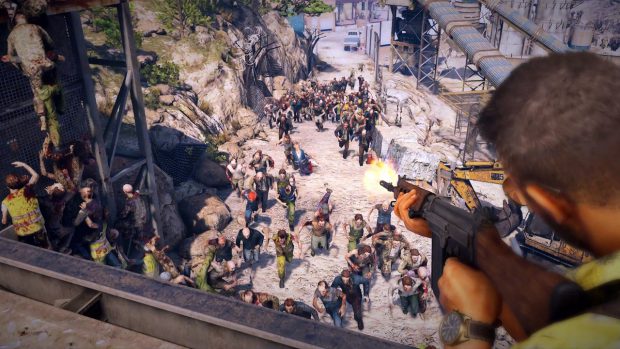 Hit detection is another issue that seems to be off, more often when you’re dealing with large hordes. It usually becomes just an ammo dump into a massive group, spraying and praying that you’re getting more kills than your teammates. Handling a handful of zombies at once isn’t an issue and the aiming is concise and you’re definitely able to tell who you’re hitting and where. But you get a horde of zombies, which happens at least once in every mission, just start throwing and hope you’re a better shot than your teammates. The one difference is explosive weapons catapult zombies from the explosion, you can definitely tell you’re doing actual damage there.

World War Z Game of the Year Edition is a fun throwback to the Left 4 Dead days as long as you have your friends with you. The missions to offer some but not variety. From holding a point to collecting a group of held down humans, to objective escorts, it’s the standard fare of missions you’d expect from a co-op title. Having your friends or actual online humans playing with you make World War Z Game of the Year Edition and its missions a lot more fun and definitely help curve the lack of variety in each level. Playing by yourself with AI can be a much more frustrating and troublesome experience as it definitely feels like the character you’re controlling has all the intelligence of the entire group with a total lack of communication from your bot teammates. Still, it’s a fun and exciting game that looks fantastic and though it doesn’t really follow the movie storyline (and don’t even ask about how the World War Z Game of the Year Edition novel fits into this), there’s a lot of classic co-op fun to be had here in a very pretty package. 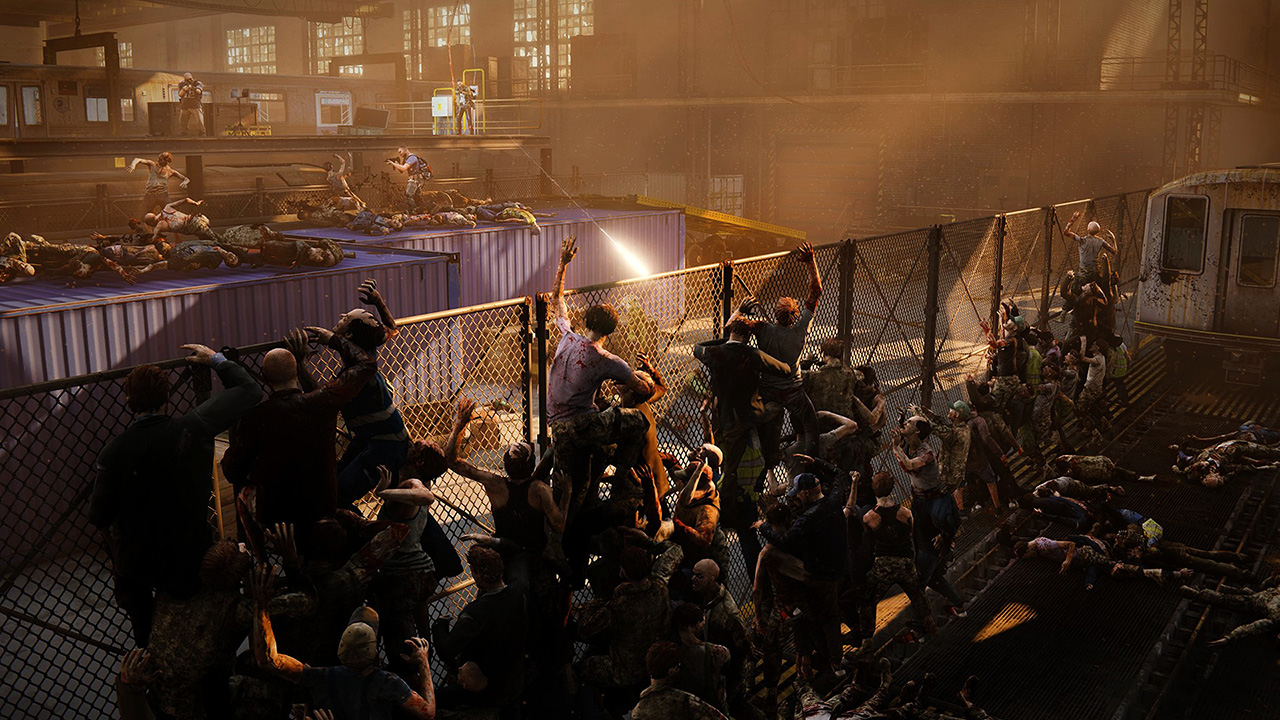